How right-wing are Germany's fraternities?

Cherished virtues like brotherhood and secrecy seem to be a thing of the past, as bitter infighting rages between members of Germany's student fraternities. Two fraternity brothers are now taking the matter to court. 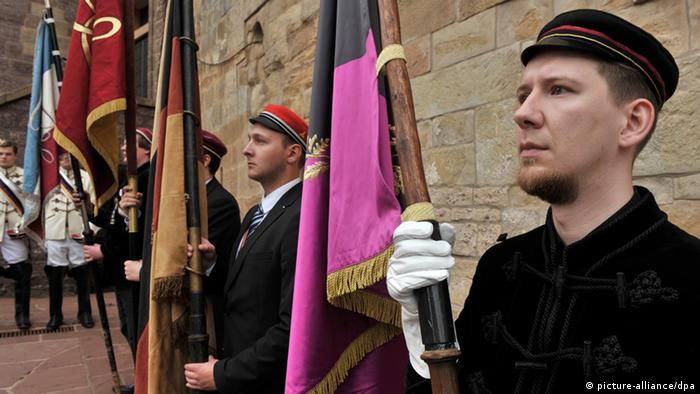 It's a serious accusation: according to the defendant Christian Joachim Becker, many of Germany's fraternities have been saturated by right-wing extremism in the past decades. Some of the country's most significant student fraternities, steeped in tradition, have already been completely infiltrated.

For this reason, Becker launched the initiative known as Burschenschafter gegen Neonazis (Fraternities Against Neonazis). With its online portal QuoVadisBuxe, the organization denounces all forms of right-wing extremism.

One example is Norbert Weidner, who called the theologian and resistance fighter Dietrich Bonhoeffer, executed by the Nazis, a "traitor." Weidner said his sentencing was "legally justified." 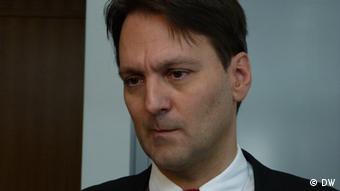 In his youth, Weidner was part of the far-right Viking Youth organization, and then moved on to become an official in the Free German Workers' Party. After this far-right party was banned in 1995, Weidner disappeared for a short while, only to re-emerge in the Bonn area fraternity 'Alten Breslauer Burschenschaft der Raczeks zu Bonn', the same fraternity to which Becker belongs.

Becker, however, does not want their fight to be reduced to a matter of personal animosity. On the contrary, he thinks the problem of right-wing extremism is one faced by the wider community of German fraternities.

"We would like the topic of right-wing extremism at the academic level to be discussed, and that politicians and the authorities deal with the issue," he said. The situation is serious, he adds. "Writings by these academic neo-Nazis give rise to far-right slogans, and this then sparks violence." 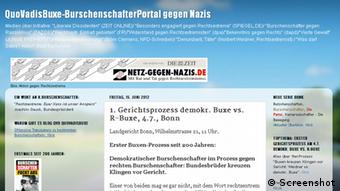 The charge that fraternities are a catchment basin for right-wing extremists is not new. The roots of these student organizations date back to the 19th century. At the time, the fraternities were staunchly regional, with names like Alemannia, Frankonia or Rhenania. Fraternities at that time advocated unity, freedom and democracy, and later wrapped themselves in the national colors of black, red and gold. After the first unification of Germany in 1871, some of these fraternities drifted off into the conservative and reactionary camp.

Today, fraternities maintain a dusty and jingoistic Germanness in public life: antiquated caps belong as much to their uniforms as ribbons in the association colors. Large flags adorn the facades of the mostly generously equipped and centrally located fraternity houses.

These accommodations are partly financed by old fraternity members, former students that remain faithful until death. For this reason, rooms are affordable for the young students -- in return, they are asked not only for lifelong loyalty but also that they uphold the fraternity's traditions. In some clubs, this can include fencing rituals that can lead to actual injury.

Neo-Nazis spring into the breach

No wonder, then, that many fraternities are finding it hard to keep up the membership numbers - a problem that, according to critics, the neo-Nazis have exploited. Of the 10,000 active fraternity members, about 1,500 are right-wing extremists, according to Becker. And Weidner is one of the "heads of the right-wing movement" that has entwined the far-right NPD party and a part of the fraternities. 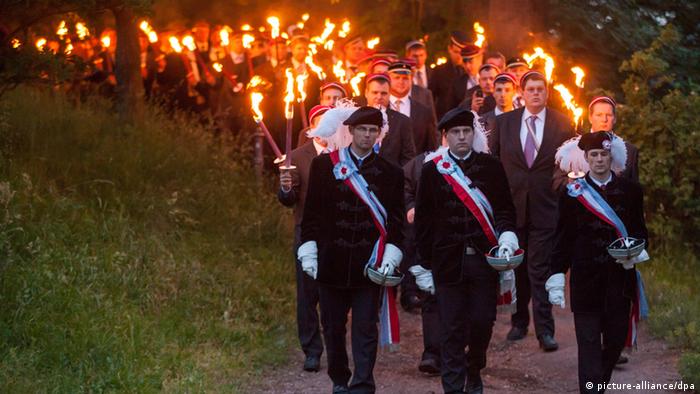 The 2012 meeting of the German Fraternities Association ended in scandal

Weidner has strongly denied these claims - and has taken his complaint to the Bonn District Court. "These structures do not exist," said his lawyer Björn Clemens. "Accordingly, my client has no leading role in such structures. These are flights of fancy."

Weidner plans to sue Becker for up to 250,000 euros ($313,375) if he repeats these, or similar, allegations. Clemens deferred the question of whether his client could be called a "right-wing extremist," saying, "You should ask him yourself." However, the lawyer, once one of the leading right-leaning figure himself, adds, "I don't think so."

For Becker and his associates, there is no doubt. For this reason they attempted to have Weidner kicked off the board of the national fraternity alliance ahead of this year's meeting in Eisenach. Their efforts, however, were in vain, as Weidner was reconfirmed in his post. Following his re-appointment, a number of fraternities left the meeting, and some even withdrew their membership from the national organization.

Becker's initiative against the neo-Nazis has called for the dissolution of the Deutschen Burschenschaft "due to the tolerance, promotion and financing of right-wing extremists." For the moment, however, observers believe it more likely that the organization will shrink until the only members left are those already beholden to the right-wing extremists.

Is QuoVadisBuxe too late? "The fight is in no way lost," says Becker. "The right-wing extremists may have won in the larger organization, but for us fraternity brothers their decision is not conclusive."

Do they have something up their sleeves? "At the moment, a new organization is being founded," says Becker. "But I'm not allowed to say more"…only that "it won't be long."

In some parts of Germany, the neo-Nazi scene is a daily source of fear. But dozens of young members are managing to turn their backs on the scene, thanks to the long-term help of dedicated social workers. (04.07.2012)

Germany's domestic intelligence agency has given a parliamentary committee access to files relating to a high-profile neo-Nazi probe. It comes a day after the agency's head resigned over the handling of the probe. (03.07.2012)

The Bundestag has voted in favor of setting up a database to gather information on right-wing extremists. The move follows claims that an investigation into a series of racist killings was marred by police incompetence. (29.06.2012)