Germany's domestic intelligence agency has given a parliamentary committee access to files relating to a high-profile neo-Nazi probe. It comes a day after the agency's head resigned over the handling of the probe. 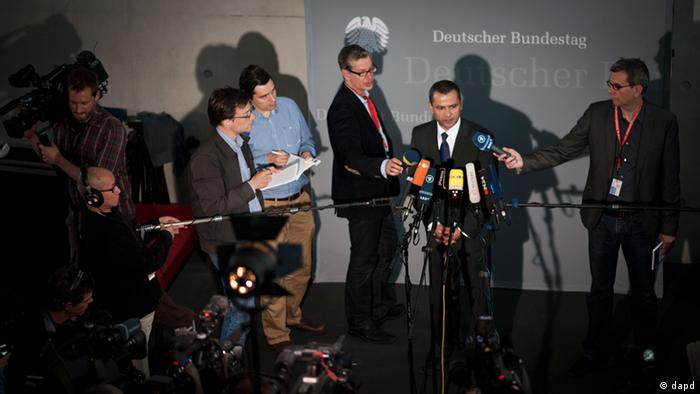 Germany's domestic intelligence agency has offered the parliamentary committee access to 25 files relating to "Operation Rennsteig," which was aimed at recruiting informants in right-wing circles in the eastern state of Thuringia between 1997 and 2003.

The operation involved the federal domestic intelligence agency, the regional agency in Thuringia and, according to the committee, the military intelligence service MAD.

The files are expected to reveal that the authorities were working with informants from the so-called National Socialist Underground (NSU), an extremist group that is believed to have killed 10 people with non-German backgrounds over more than a decade before their cover was blown earlier this year.

Last week, it became apparent that some of the files relating to the operation were shredded by the federal intelligence agency last year. On Monday, the head of the agency, Heinz Fromm, resigned his post.

On Tuesday, Fromm's counterpart at Thuringia's intelligence agency, Thomas Sippel, also stepped down in connection with the revelations. He will go into early retirement.

The chairman of the parliamentary committee, Sebastian Edathy, also urged the MAD to release their files, while the MAD insists it is cooperating. It also said on Tuesday that it does not have "Operation Rennsteig" files.

The parliamentary committee will focus its investigation on whether the intelligence agencies tried to recruit or even used NSU members as informants.

Parliamentarians from all parties are calling for a reform of the system. Suggested measures include closer cooperation between federal and state agencies and stronger control mechanisms.

Allen Weisselberg will be required to testify against the firm in an upcoming fraud trial. He was also handed a $2 million penalty and a five month prison sentence.