She had to hide memory cards in her bra to collect footage of Iran's illegal desert raves. In her film "Raving Iran," director Susanne Regina Meures followed two Tehran DJs as they fought for their right to party. 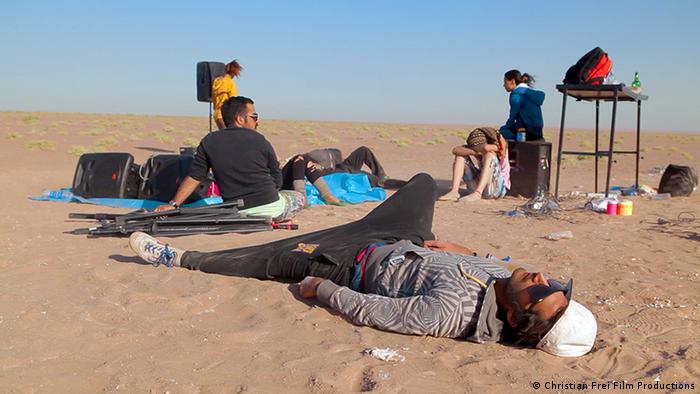 It all started with a magazine article about techno parties in the Persian desert, which German filmmaker Susanne Regina Meures read few years ago. A music fan herself, she couldn't get out of her mind the idea of people dancing their fears away while living under one of the most oppressive regimes in the world - one which has banned Western music.

To make a documentary film about Iran's forbidden techno scene, Meures had to be very secretive. She used a phone camera and hid the memory card in her bra - the only place that was safe from police who were constantly stopping her. Each time she left Iran, she was unsure whether she'd be allowed back in.

But these were minor problems compared to the reality which Iranian musicians and DJs face everyday. Anoosh and Arash, two Tehran DJs at the center of Meures' film "Raving Iran," guide her through the Kafkaesque bureaucratic procedures that deny them the right to release their "satanic" music.

Forced to go underground, Anoosh and Arash organize illegal parties far from the city center, sometimes in the desert. The film captures the spirit of these people, for whom a techno party is not just another weekend in the city - it's an act of rebellion and a statement of freedom.

"Raving Iran" has already received flattering reviews at Toronto's Hot Docs, Switzerland's Visions du Réel, and Cape Town's Encounters festivals. On September 26, it will premiere in Berlin to an already sold-out audience. Anoosh and Arash will be present as well, DJing freely in one of Europe's most liberal cities.

Ahead of the premiere, director Susanne Regina Meures told DW how she made the daring documentary and why she hopes the film can change Europe's attitudes toward immigration.

DW: You have contacted a lot of people in Iran's music scene, but most were afraid to talk publicly. How did you convince Anoosh and Arash to participate in your film?

Susanne Regina Meures: To be honest, I didn't convince them. I told them what I'm interested in and asked if they would be interested in being a part of the film. They said yes immediately, despite the risk.

The biggest question was how to treat the material in the end so that it would be safe for everyone. Anoosh and Arash have now left Iran, which is why I was able to treat the film material as I did. If they had stayed, it would have turned into a different film. I probably would have worked with off-voices and definitely would have masked their faces. 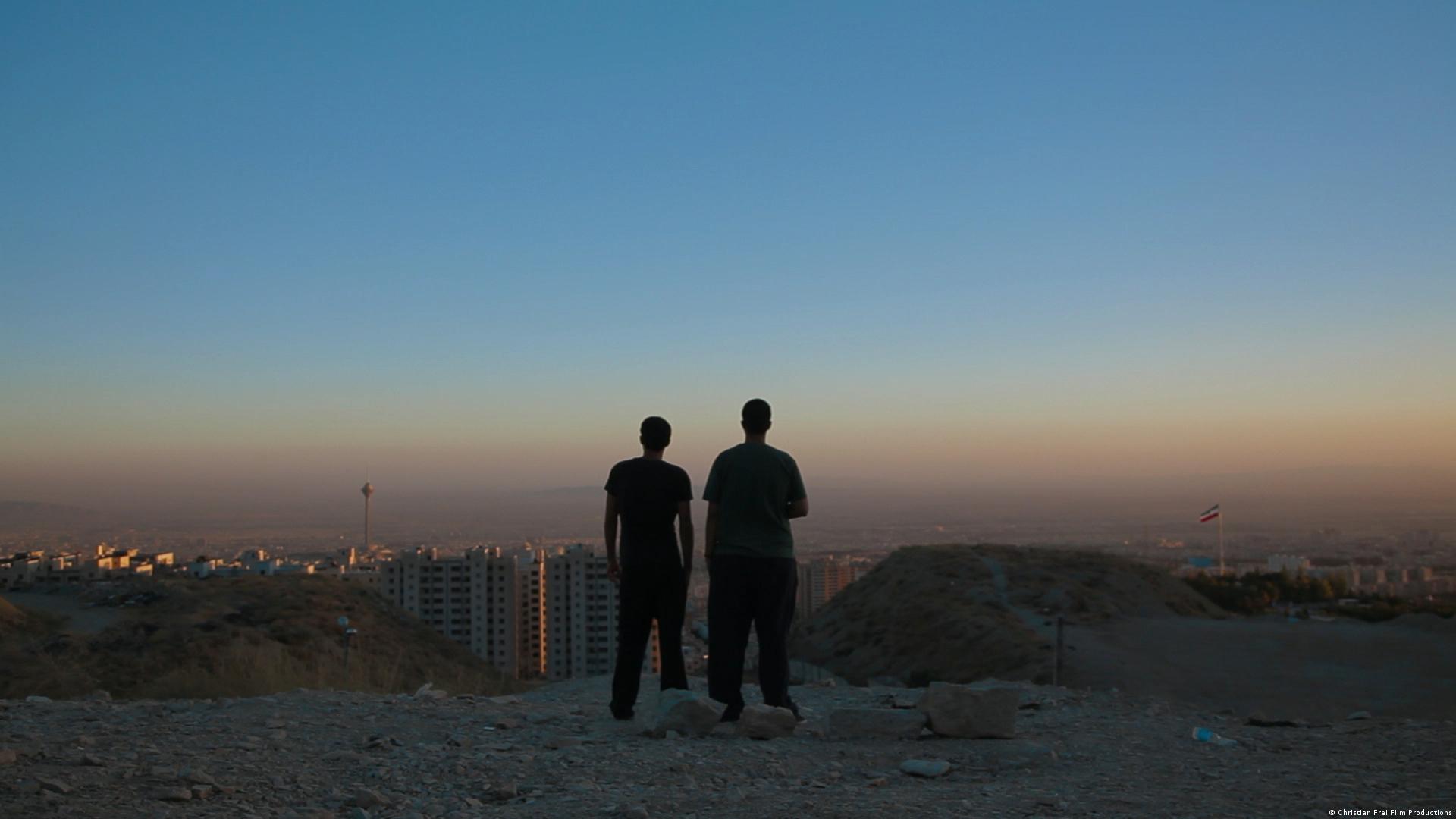 DJs Anoosh and Arash organized illegal techno parties, but have since left Iran due to safety reasons

How did they find out about electronic music in the first place, since it's illegal in their country?

Through the internet and CDs that friends brought back from oversees. Sites like YouTube, Facebook or Soundcloud are blocked in Iran, but Anoosh and Arash use external services to bypass the restrictions. This is where they get their inspiration from and this is how they connect to the world. A lot of young people in Iran do the same. They listen to Western music in private. But they cannot do it publicly.

With this in mind, it's impressive how westernized Iran feels in your film. Arash is always wearing a cap with a Red Bull logo, he has a tattoo on his arm, and they both drive Western cars.

Iran's urban population and especially the young middle-class is very westernized - or, let's say, orientated to the West. However, Western films, literature, theater, and any kind of Western culture is restricted and most of it banned.

When there was a power shift in the late 1970s and the conservatives came to power, it was their way of trying to minimize any kind of pleasure for the Iranian people. It's all about power in the end and restricting external influences to be able to exert more power on the people with their own ideas.

What is it like to be at an illegal party in Iran? Can you compare it to being at a party in Berlin?

The parties are usually held in private homes, somewhere in the mountains, or outside of the city. Just like at the parties held in the desert, it's usually only friends and fiends of friends that participate. It's not like you can make it public on Facebook and the whole city comes.

That would be too dangerous.

Comparing it with our own parties in the West, quite unusual is also the fact that the girls arrive with headscarves on and long clothes only to be ushered to a special room where they change when they arrive. They come out with the clothes we know: mini skirts, high heels, make up. You can buy all these things in local stores, but you cannot wear them in public. 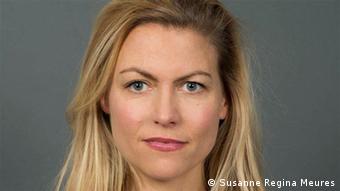 But when the party starts, the anatomy of it is the same as it is anywhere in Europe. People dance and have fun.

What were the biggest challenges in making the film?

Making this film was a quite a challenge from the start. First of all, it was difficult to gain access and find the kids who throw these parties - and ultimately to gain their trust.

The whole shooting process was difficult, too. I was shooting without permission, plus I had to enter the country several times. I never knew if they would issue yet another tourist visa. I wasn't able to take any equipment to Iran apart from a small photo camera. My sound equipment got confiscated straight away. Luckily, I sent it by courier and no one could trace it back to my name.

I had no place to stay. My friends weren't able to host me because it was too risky for them. Hotels weren't an option either. I called the church where we stayed for a few days before. They kindly asked us to leave, since they felt uncomfortable with what I was doing. I ended up staying on someone's floor for months.

Another problem was to get the footage out of the country. I ended up paying Iranian students who were studying abroad to take the hard drives with them. The footage ended up all over Europe, from where I couriered it back to Zurich, where I live now.

But I never thought of quitting the project because of that. You just take it as it is. It's a part of the whole package. I wouldn't say I'm not a fearful person - of course I am in different parts of life. But when it comes to authorities, I think I tend to turn into a rebel.

Your documentary is very intimate. There is a scene where Anoosh breaks up with his girlfriend. It almost feels like a feature film.

I became part of their lives. I had a cameraman in the beginning, but later I saw that it was better if I was alone. I was always around and they kind of forgot about me.

It may sound strange but I think it was an advantage that I didn't speak the language. I couldn't understand what they were saying and they often forgot about the fact that I would be translating everything afterwards, so they spoke very openly.

There is a scene when Anoosh and Arash think of leaving Iran and going to Switzerland, but then they find out that 50 percent of the Swiss population voted to restrict immigration. Do you think your film can help change Europe's attitude towards immigrants from the Middle East?

That is a very big goal. Of course I'm hoping that it might change people's perspective. It shows that there are not just economic refugees, but that there are also social refugees that can't live in a country because their personal freedom is limited to such an extent that it becomes unbearable.

But the people who go to see my film probably have quite a liberal mindset anyway. So I think there's no big change to be made. But you can always hope!

Where are Anoosh and Arash now?

I don't want to spoil the end of the film, but I can say that now they live in Europe. They lived in a refugee camp for two years and moved out a few months ago. They are trying to set themselves up and find an apartment and jobs.

What can DJs and artists in the West learn from their experience?

Many of my artist friends in Europe are complaining about the situation here. They're not being paid enough, every gig is getting harder and harder, the audience is getting worse. I think it's human nature. People always complain; it doesn't matter in which country they are. But I think that if they see a film like "Raving Iran" they might realize that their problems are nothing in comparison.

Oliver Stone didn't get funding for "Snowden" in the US. In Germany, he found both financial support and filming locations for his political thriller, but its release is low-key. Is the US trying to keep it under wraps? (15.09.2016)

Ron Howard's Beatles documentary contains never-before-seen footage of the Fab Four on tour. "Eight Days a Week - The Touring Years," released 50 years after the band's four-year nonstop tour, shows why they broke up. (14.09.2016)

Film Without Borders explores human rights on the big screen

Another film festival? This one is unique, concentrating on human rights. Film Without Borders gives pre-premiere screenings of productions from Israel, Tunisia, Azerbaijan and elsewhere - under the motto "Homeland." (14.09.2016)