An Australian plane involved in the search for a passenger jet has picked up another possible signal from its black boxes. Searchers are racing against time with the signals from the flight data recorders due to fade. 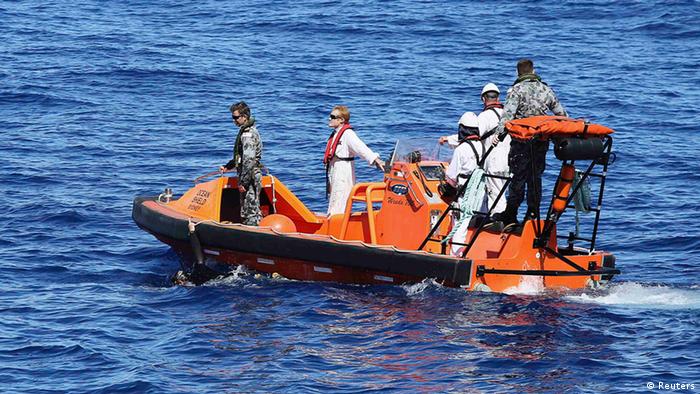 The Joint Agency Coordination Center (JACC), which is overseeing the search operation in the southern Indian Ocean said on Thursday that the possible underwater signal had come in an area in which similar ones had been previously been detected.

"The acoustic data will require further analysis overnight but shows potential of being from a man-made source," said the statement issued by Angus Houston, who is heading the search.

If confirmed, this would be the fifth underwater signal detected in the search for Malaysian Airlines flight MH370, which disappeared from radar screens on March 8, while on a flight from Kuala Lumpur to Beijing. All 239 people on board the Boeing 777 are believed to have died.

This follows two signals picked up by the Australian ship Ocean Shield on Tuesday. The vessel is equipped with a US Navy towed pinger locator and is patrolling the ocean 2,200 kilometers (1,400 miles) northwest of Perth, where the JACC is based.

The Royal Australian Navy has also been using planes to drop buoys dangling listening devices into the water in a further effort to pinpoint the wreckage.

Fourteen planes and 13 vessels are involved in the operation, which has become more urgent in recent days due to the fact that the plane's flight data recorders, which have a lifespan of around 30 days, could fade at any time.

An Australian ship has detected electronic transmissions that are consistent with a flight data recorder. Search teams hope the signals will lead them to MH370's black box. (09.04.2014)