Pro-democracy activists in Hong Kong have vowed to embark on a campaign of civil disobedience, after Beijing announced rules giving it control over candidates in the territory's next leadership election. 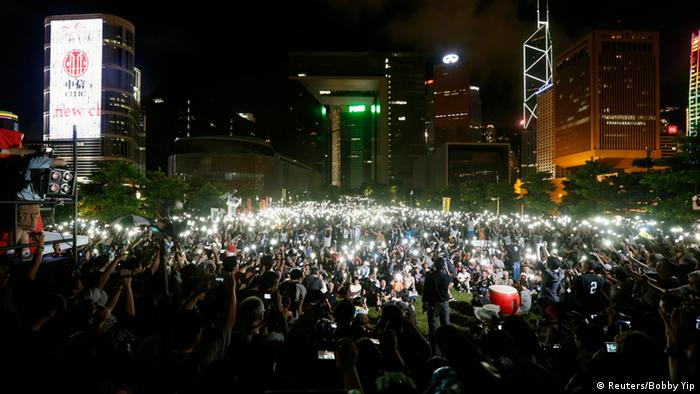 Thousands of people gathered in a park across from the Hong Kong government headquarters on Sunday evening to protest Beijing's decision to rule out open nominations for the city's leader, chanting slogans and waving their cellphones.

Occupy Central, an alliance of pro-democracy activists in the semi-autonomous territory, said it now "has no choice" but to move forward with plans to stage a mass sit-in targeting streets in Hong Kong's business district.

The group will launch "wave after wave of protest action" over the next few weeks, Occupy Central leader Benny Tai told reporters. The group has vowed to rally at least 10,000 people.

Speaking to hundreds of supporters in front of a stage in the city's financial district, Tai said a "new era of civil disobedience," is unfolding in Hong Kong.

The calls for action were sparked by a decision announced Sunday afternoon by the standing committee of China's top legislative body, the National People's Congress. It ruled that Hong Kong's next chief executive would be chosen only from candidates that had been nominated by a 1,200-member "broadly representative committee."

Although Hong Kong has enjoyed substantial political autonomy since being handed back to China by Britain in 1997, its leader since then has been chosen by a pro-Beijing committee.

China had said that the elections in 2017 would be the first since the handover to be decided by "universal suffrage," but Sunday's move would seem to run counter to this promise.

Earlier in the day, deputy secretary general of the NPC, Li Fei, told a news conference in Beijing that openly nominating candidates would create a "chaotic society."