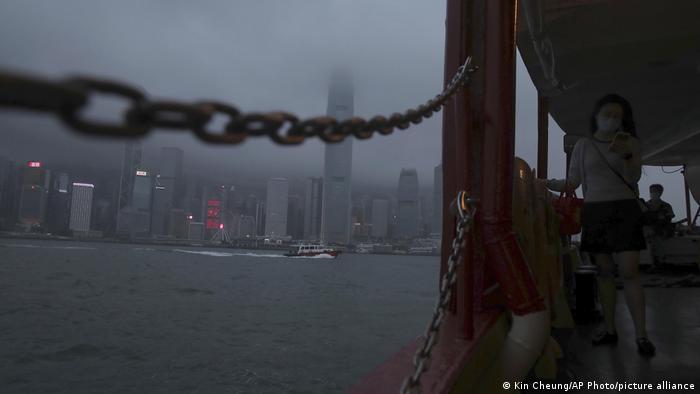 Two Hong Kong residents who campaigned for international sanctions against China for cracking down on the city's pro-democracy movement and shunting the deal made during the city's handover from British rule pleaded guilty Thursday under the city's draconian national security law.

The cases against activist Andy Li, 31, and paralegal Chan Tsz-wah, 30, are linked to that of pro-democracy media tycoon Jimmy Lai whose newspaper, Apple Daily, was shut down by the authorities in June.

Both Li and Chan pleaded guilty to the charge of "colluding with foreign forces to endanger China's national security" and were in custody ahead of their plea.

Part of a pro-democracy 'criminal syndicate'

The national security law was imposed by Beijing last year to stomp out dissent in Hong Kong. More than 130 people, including some of the best-known democracy activists, have been charged under it.

Jimmy Lai, the pro-democracy media tycoon, is perhaps the most famous of those charged with violating the national security law. He is accused of running a "criminal syndicate" that pushed for sanctions against China.

While little was heard about Li and Chan's case in open court, prosecutors did read out a summary Thursday of allegations. Prosecutors allege Lai and his American aide Mark Simon were the "masterminds and financial support behind the scenes and at the highest level of the syndicate."

Last summer, Li and 11 others made a doomed attempt to flee Hong Kong in a speedboat for Taiwan. The boat was intercepted by the Chinese coast guard and Li was placed in detention prior to his conviction in closed court for illegally crossing the border.

Everyone on the boat was then handed over to the Hong Kong authorities.

Simon departed Hong Kong last year and has said the case against Lai and his alleged co-conspirators is little more than a political witch hunt against those China finds problematic for their pro-democracy views.

Simon told news agency AFP he believes Li and Chan "are making statements under great duress, with questionable legal representation, and with Andy still having charges in China over his head."

Li and Chan also faced charges of assisting fugitives from the law, but these charges were shelved due to the guilty pleas.

After they submitted their guilty pleas to the court, they were returned to custody and will not have another hearing until next January.

In a separate case Thursday, seven pro-democracy activists including Raphael Wong, the former chairman of the League of Social Democrats political party, and Figo Chan, who led the now-defunct group that organized the 2019 protests, the Civil Human Rights Front, also pleaded guilty to inciting others to participate in unauthorized assembly.

He added: "Another key element is that the people carrying out civil disobedience actions know being jailed is just part of the process. We are not worried about being jailed. Instead, we hope we can achieve democracy after this process.''