Xiomara Castro, who was sworn in as president, faces the challenge of a political crisis over the next head of congress. US Vice President Kamala Harris attended the inauguration. 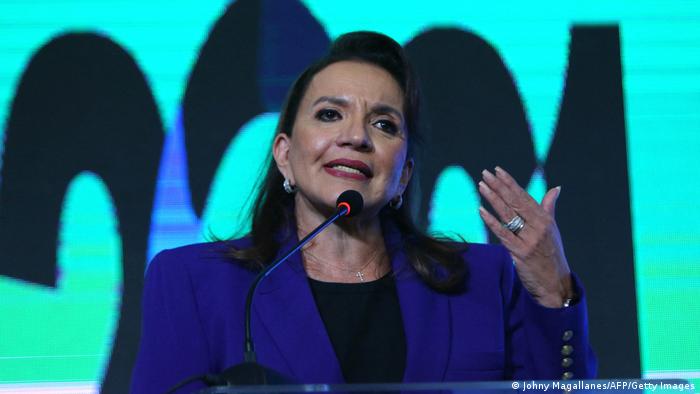 Former first lady Castro will be taking over after two terms of Juan Orlando Hernandez.

Xiomara Castro was sworn in as the first female President of Honduras on Thursday. The former first lady takes over after two terms of President Juan Orlando Hernandez.

However, the country is facing a crisis over who will be the head of the newly elected congress. Two rival factions in the winning Libre Party have nominated their own candidate for the position. Negotiations to reach a solution on Wednesday were stalled.

US Vice President Kamala Harris attended the inauguration and participated in talks about migration from the Central American nation to the US. King Felipe VI of Spain and Taiwan Vice President William Lai were also at the ceremony.

Who are the two candidates

One of the candidates, Luis Redondo, who has the support of Castro and many members of the party, presided over her inauguration.

The other candidate is Jorge Calix, who has the support of more than 70 of the 128-member congress. Castro offered him the position of Cabinet Coordinator (similar to chief of staff) on Wednesday, but he is yet to respond to her offer.

Castro had made an agreement with Savior Party of Honduras leader (PSH) Salvador Nasralla, which was key to her victory in the November elections. He agreed to withdraw from the presidential race in return for the position of vice president and a pledge to support the PSH's Redondo as president of the congress.

However, a group of dissidents from Castro's party say the congress should be led by the party with the most members.

What challenges does Castro face?

According to the NGO FOSDEH, about 71 percent of Hondurans live in poverty. The country also faces violence instigated by gangs of drug traffickers.

Eugenio Sosa, a sociologist at the National University of Honduras, told the AFP news agency that the 62-year-old Castro inherits "a country in a deep crisis — above all a social crisis — whose despair, whose deterioration of living conditions have become so profound."

He said one of the major problems the country faced was the mass exodus of people migrating to the US.

"The people of Honduras are always grateful to the people of Taiwan for their support that they have always given us. We have worked together hand in hand for many years and hope to maintain this relationship," she said in a video clip.

Castro had initially implied she could have closer ties to Beijing during her campaign. Taiwanese Vice President William Lai is expected to hold talks with her during his visit.

Three dance floors, a bar and a disco ball. This once popular club in the US city of Brownsville now serves as a shelter for migrants who have made it across the nearby Mexican border.