The scene of Juan Orlando Hernandez's arrest — with him shackled and wearing a bulletproof vest as he is led away by police — came as a major fall from grace for a leader once considered a top US ally. 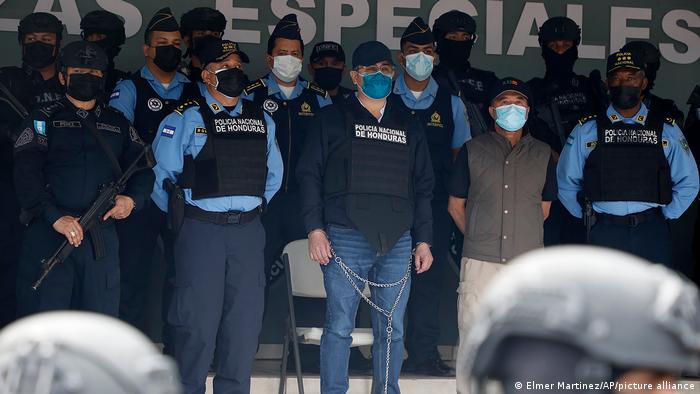 Honduras' former President Juan Orlando Hernandez was arrested by police on Tuesday after the United States sought his extradition on drug trafficking charges.

The former leader was led away by police from his residence in the capital city Tegucigalpa, with his wrists and ankles shackled.

Hernandez was seen wearing a bulletproof vest. A police helicopter also appeared to be escorting the caravan.

Police had surrounded Hernandez's house soon after news broke about the US government seeking his extradition. Hernandez had been wanted for years by US prosecutors for his alleged ties to drug traffickers.

Hernandez's arrest in the public eye represents a major fall from grace for a leader who was once a top US ally. 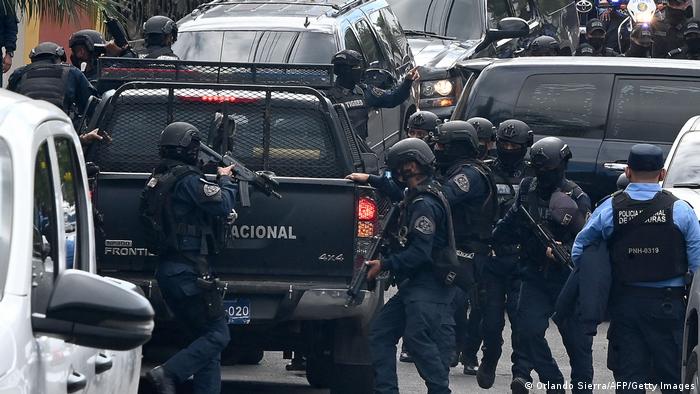 US asks Honduras to extradite Hernandez

Earlier in the day, the Honduran Foreign Ministry said the US Embassy had requested the arrest of a Honduran politician. The ministry added the request had been sent to the Honduran Supreme Court.

While the ministry did not name the politician in question, officials speaking on condition of anonymity told the media the request was for Hernandez.

Hernandez, who was once considered a top US ally in the region, ruled the country for eight years. Washington's extradition request represents a major blow to the reputation and partnership the US once shared with Honduras.

Hernandez faces unspecified charges, though he has been implicated in a drug trafficking case in a US federal court and accused of corruption. He has repeatedly denied any wrongdoing.

US mounts pressure on Hernandez

Last week, US Secretary of State Antony Blinken said Hernandez was included on a list of people accused of corruption or undermining democracy in El Salvador, Guatemala and Honduras.

"No one is above law," Blinken added in the tweet.

Blinken said in a statement that the US had credible media reports that Hernandez had engaged in "significant corruption by committing or facilitating acts of corruption and narco-trafficking and using the proceeds of illicit activity to facilitate political campaigns."

The ex-president's brother, former Honduran congressman Tony Hernandez, was sentenced to life in prison by a US judge in March last year for drug trafficking.

The judge said Tony Hernandez had accepted millions in bribes to funnel into the ruling party's coffers for elections in 2009, 2013 and 2017 to benefit his brother.