Presidents Francois Hollande and Vladimir Putin have spoken on the sidelines of memorial services in Armenia, discussing the fragile truce in Ukraine and a suspended French warship delivery for Moscow's military. 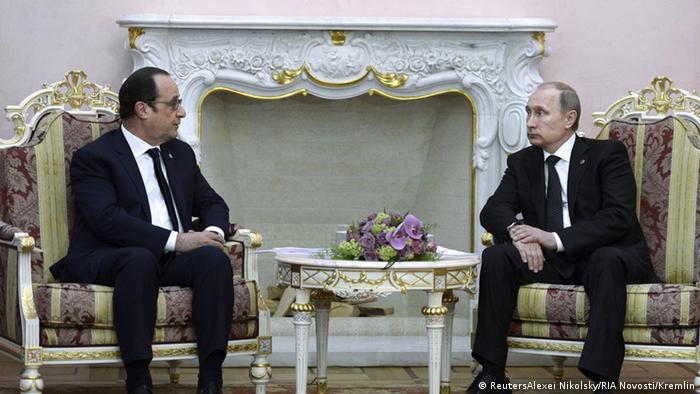 Russian President Vladimir Putin acknowledged on Friday that trade ties between Russia, France - and Europe as a whole - had suffered in recent months amid sanctions and other responses to the conflict in Ukraine.

"Unfortunately, our ties are not in the best shape, trade turnover is falling including with France, which only causes regret," Putin told Hollande in the Armenian capital Yerevan. Both leaders were present for a memorial 100 years after the start of the genocide of Armenians in the Ottoman Empire during the First World War.

Hollande, meanwhile, called on Putin to push for the full implementation of the terms of the second Minsk ceasefire in a bid to halt fighting in the east of Ukraine.

"The best way to be able to move past what has hindered us would be to move forward with the application of the Minsk accord," Hollande said. Hollande, Putin, German Chancellor Angela Merkel, Ukrainian President Petro Poroshenko and Belarusian host Alexander Lukashenko brokered the peace plan in February.

Despite the ceasefire deal, OSCE observers still regularly report fighting - instigated both by pro-Russian rebels and Kyiv's military - in the eastern regions of Ukraine. 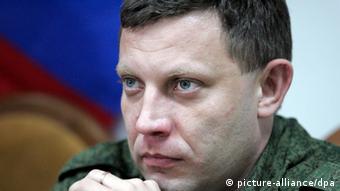 One key term of the plan was the withdrawal, by both sides of heavy weapons from the front lines, a process the OSCE says is not complete. On Friday, German newsmagazine Der Spiegel reported that Alexander Zakharchenko, the prime minister of the self-proclaimed Donetsk People's Republic, admitted to his troops still using heavy weapons in the east. The article, which did not directly quote the pertinent claims from Zakharchenko, suggested that this was a response to continued bombardment from the Ukrainian military. Spiegel's full print magazine hits the newsstands in Germany each Saturday, the outlet regularly issues advance releases.

'For now, no decision taken' on Mistral warships

Putin and Hollande's meeting came just days after apparent movement in the suspended delivery of two French-built helicopter carriers to Moscow. One Mistral class warship - the Vladivostock - was due for delivery last year, but was suspended in light of the Ukraine conflict, the second - the Sevastopol - was set for completion later this year. 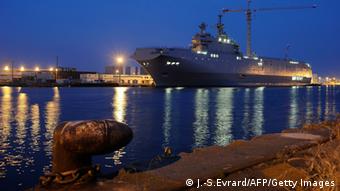 The two Mistral vessels are docked in St Nazaire, their eventual ownership uncertain

On Wednesday, Hollande had said that one possible solution - should the deal not go ahead - was for France to reimburse Moscow for the 1.2-billion-euro deal ($1.29 billion at today's rate, markedly more at the time of the sale) plus extra costs incurred.

As the pair convened, a Russian source close to the talks indicated to Reuters news agency that an agreement to cancel the contract was close, saying of Hollande's suggestion of a refund: "We value this declaration very highly."

Hollande, however, told reporters in Yerevan that the situation remained fluid.

"When it comes to the Mistral … I have set out the options: either the Mistral is delivered, which is not our decision at this point; or it will be refunded in a manner which we have yet to discuss," Hollande said. "It's as simple as that, and for the moment, no decision has been taken."