A US-based auction house says the red phone, complete with Nazi party symbol, was bought by an unnamed bidder. The phone was described as "arguably the most destructive 'weapon' of all time." 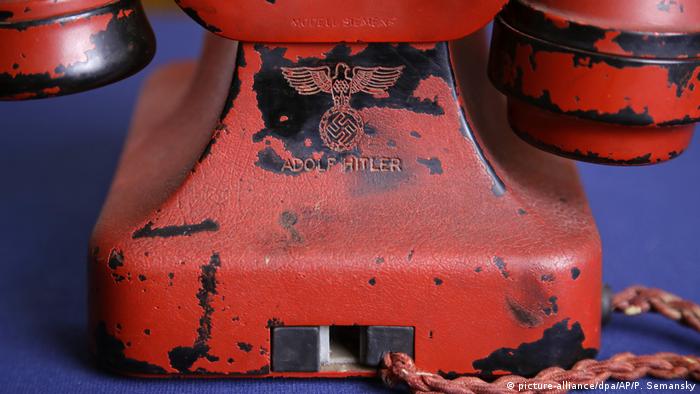 Originally a black Bakelite phone, later painted crimson and engraved with Hitler's name, the relic was found in the Nazi leader's Berlin bunker in 1945 following the regime's defeat in World War II.

Occupying Russian officers gave the phone to a British officer, Sir Ralph Rayner, whose son inherited it and later put it up for sale.

Research and photographs prove its provenance and authenticity, according to the auction house.

The phone was used in vehicles and trains as well as Hitler's field headquarters.

According to an online catalog, the handset of the phone must be rotated almost 60 degrees before it can be lifted out of its cradle. This feature kept the handset from shaking loose while being transported.

The auction house labeled the phone a "weapon of mass destruction," noting that the orders Hitler gave over the phone took many lives.

A spokesman said the seller and auction house hope it ends up in a museum, where people who see it "really understand what extreme fascist thinking can bring about."

Kornfeld says a porcelain figure of an Alsatian dog, also owned by Hitler, also sold Sunday to a different bidder for $24,300.

More than a thousand other items were also auctioned off.

A former secretary to Nazi propaganda minister Joseph Goebbels has died, aged 106. Brunhilde Pomsel was one of the last remaining people who knew members of the Nazi leadership in person. (30.01.2017)

A constitutional court official has confirmed a lawsuit against the Austrian state for the seizure of the dictator's birthplace. The owner is arguing that the expropriation failed to meet 'standard legal requirements.' (31.01.2017)