Bangladeshi special forces have shot and killed a man who tried to hijack a Biman Bangladesh Airlines plane bound for Dubai. One passenger claimed the suspect started shooting just a few minutes into the flight. 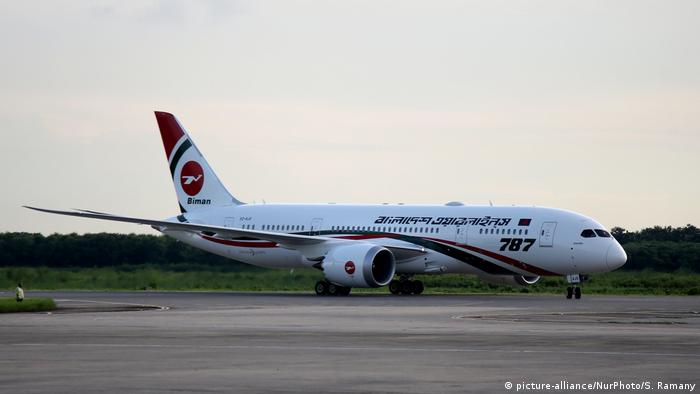 A Biman Bangladesh Airlines plane was forced to make an emergency landing in the southeastern Bangladeshi city of Chattogram on Sunday after a man allegedly tried to hijack the aircraft.

The plane was en route to Dubai from Dhaka, with a stopover in Chittagong, when the incident took place on Sunday, Civil Aviation and Tourism Secretary Mohibul Haque said.

The jetliner made an emergency landing at Shah Amanat International Airport in Chittagong at 5:15 p.m. (1315 UTC).

Police said security forces stormed the plane and tried to arrest the lone suspect, a Bangladeshi man, aged around 25.

SM Matiur Rahman, a major general in the Bangladesh Army, said the suspect acted aggressively toward officers on the plane, and in response, commandos opened fire on the man, who was injured and immediately detained.

He died a short time later as he was being transported from the scene.

"We didn't have the chance to negotiate. Our commandos had to act swiftly," Rahman said.

The army official said the suspect, whose name has not been released, asked to speak to his wife or to Prime Minister Sheikh Hasina.

Airline officials said all passengers had safely exited the plane.

"All 150 plus passengers are safe," Air Vice Marshall Nayeem Hasan told French news agency AFP, adding that it was unclear what the man's intentions were.

"We think he is a suspected madman. He is saying that he has a bomb, but we are not sure," Hasan said.

One passenger told reporters in Chittagong that the suspect "fired twice ... just ten minutes after the plane took off [from Dhaka]."

An investigation would be carried out to determine whether security lapses had occurred, officials said.

An Aeroflot flight was forced to land in central Russia after a passenger tried to divert the flight to Afghanistan. Russian investigators described the man as "a drunk" who threatened the crew with weapons. (22.01.2019)

Cyprus has extradited to Cairo an Egyptian who hijacked an airliner in 2016 and said he sought asylum to highlight Egypt's "fascist regime." Last year, the European Court of Human Rights delayed his handover. (19.08.2018)

After realizing he was running late for his flight, a 47-year-old London librarian made a hoax bomb call to delay the plane. Police said the move was "quite ridiculous" following his appearance before court. (16.08.2018)