The Qatari national women's basketball team has forfeited a basketball game at the Asian Games after being told they would not be allowed to play wearing hijabs. Other Asian Games athletes have competed with hijabs. 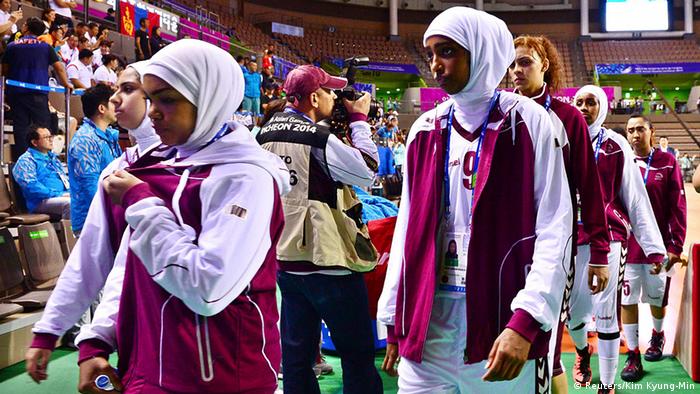 Qatar were scheduled to take on Mongolia on Wednesday in an early round match of the women's basketball competition at the Asian Games in Incheon, South Korea.

Instead, the team ended up forfeiting after they were told they could not play while wearing hijab headscarves. Hijabs are worn by many Muslim women around the world.

"As far as I know it's an issue of the international basketball federation, not the Asian Games," the official was quoted as saying.

FIBA said earlier this month it was introducing a test-phase regarding on-court attire for players, but this would only pertain to games at the national level after countries had applied.

One of Qatar's players quoted by Reuters said she knew about the ban before traveling to the Asian Games.

"We have to take this stand," said Ahlam Salem M. Al-Mana. "We are here to push the international association that all Muslim teams are ready to compete in any competition.

"We knew about the hijab ban, but we have to be here. We have to show everyone that we are ready to play, but the International Association is not ready."

The Asian Games spokesperson said the organizers had not received any instructions from FIBA regarding hijabs worn during basketball games.

Athletes in other sports at the Asian Games are being allowed to compete in hijabs, and Qatari player Amal Mohamed A Mohamed was quoted by Reuters as saying her team had played in other Asian countries with the hijab.

She added that not allowing the hijab on the basketball court went against the slogan of the Asian Games: "Diversity Shines Here."

No hijab: an Iranian journalist offers women a stealthy freedom on Facebook

The Facebook page "My Stealthy Freedom" is another sign of social media's power. Journalist Masih Alinejad posted a photo of herself at the beginning of May - and virtually started a mass movement. (28.05.2014)