Highlights of a Short Election Campaign | News and current affairs from Germany and around the world | DW | 16.09.2005

Highlights of a Short Election Campaign

Starting with Chancellor Schröder's call for a no-confidence vote in June, the German electorate has faced an intense summer of campaigning. DW-WORLD summarizes the main points of the race set to end Sept. 18. 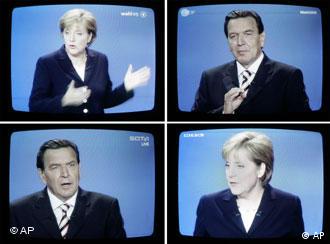 Gerhard Schröder and Angela Merkel on all channels

A process that was riddled with pitfalls when it started in July will come to an end on Sunday, when Germans decide who will sit in the chancellery for the next four years.

Already upset about his coalition's inability to push through necessary economic and welfare reforms due to constant blockades from the opposition and inner-party bickering, and after suffering damning regional elections in North Rhine-Westphalia, Chancellor Gerhard Schröder called for a vote of confidence he hoped to -- and did -- lose, as a way of introducing early elections.

German President Horst Köhler and the country's highest court approved the move, deciding that Schröder's ruling coalition of Social Democrats (SPD) and Greens did indeed fulfill the necessary legal criteria to dissolve parliament -- not having enough of a mandate to run the government effectively. 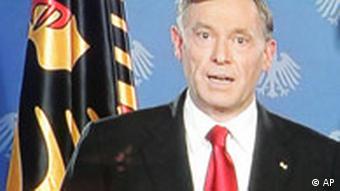 Köhler did his duty

"It is my duty as president to decide this issue according to the law," Köhler (photo) said in a national television broadcast on July 22. "I think it is best to have a new election to let the people decide."

The decision pleased the majority of German voters and all the major political parties. Since receiving the official thumbs up, the parties' campaigns have been dominated by their different visions of how to deal with Germany's sluggish economy and high unemployment. 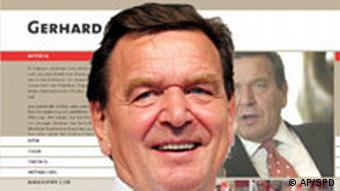 Schröder insists his reforms have Germany on the right track

In part, Schröder's unpopular market and labor reforms led to the need for new elections in the first place, but as the campaigning wraps up, he continues to insist that Germany has taken the right route.

"We are going in the right direction," Schröder (photo) said during his party's caucus. "And we need to stay the course."

Like Schröder, Angela Merkel, the opposition Christian Democratic party's (CDU) chancellor candidate, continues zigzagging across the country holding two rallies a day to win over the voters who could tip the scales in their favor.

Rather than speculating on possible coalitions -- as one-third of voters are reportedly undecided -- Merkel has been spending more time in public trying to win votes with sharp criticism of governmental policies that she blames for nearly 5 million unemployed and a budget that continuously breaks European Union Stability Pact rules.

"There is no reason that a re-elected SPD parliamentary group would be able to implement new reforms," she said. "They may be willing to be in the government, but they are not able."

Union slipping in polls since debate 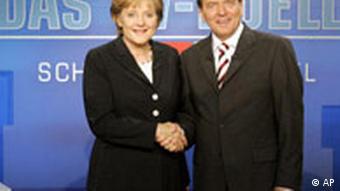 Until July, Merkel's party was well ahead of the SPD in the polls, at times even enjoying an absolute majority. But Merkel has seen her lead slip away since July, when the CDU revealed plans to increase national sales tax by 2 percent.

The real downturn came after a televised debate between Merkel and Schröder on Sept. 4, in which the chancellor again proved himself to be both media-savvy and telegenic, while his challenger managed to squeeze through the broadcast without too many glaring gaffes. Since then, Schröder has increased his party's take of the vote to 33 percent and put an end to the newly-formed Left Party's double-digit poll results. 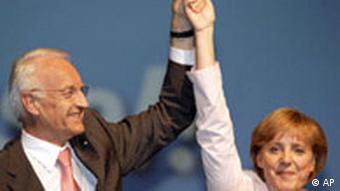 Stoiber's comments didn't give Merkel much of a hand with voters

Unfortunate comments from Edmund Stoiber (photo), leader of the Christian Social Union, the CDU's Bavarian sister party, and runner-up to Schröder in the 2002 election, did further damage to the conservatives' campaign. Stoiber called eastern Germans "frustrated" and less capable than the voters in his home state of Bavaria.

Merkel's woes have only been multiplied by Paul Kirchhof, a potential finance minister who the CDU leader introduced as key to the reforms her government would carry out upon election. But members of the party base have scorned the Heidelberg economics professor, saying his radical changes to Germany's tax code go too far beyond the party platform they have supported.

Though the SPD's campaign has not been as turbulent as the CDU/CSU's, it remains to be seen whether Schröder can earn enough votes to stay in power and carry through his reform plans, or whether the CDU/CSU will get a chance at trying to bring Germany back up to speed.

With five days to before Germany elects a new government, both Chancellor Gerhard Schröder and opposition frontrunner Angela Merkel are confident they can gain a majority and avoid a so-called grand coalition. (Sept. 13, 2005)

DW-WORLD looks back on the issues and rhetoric that have fueled Germany's approaching elections.

DW-WORLD's selection of background articles shows how the election system works, what past elections have shown and why this year's election is more complicated than previous ones.