Ryanair said its first-quarter profit dropped more than a fifth due to higher fuel costs and salaries for pilots. The budget carrier is under growing pressure to improve pay and conditions for its staff. 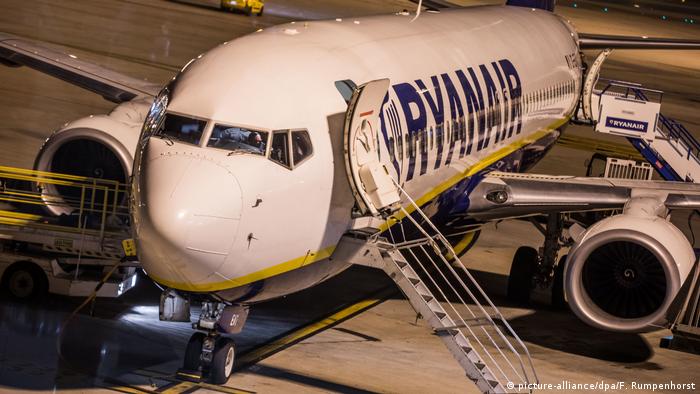 Irish no-frills airline Ryanair on Monday said that its first-quarter net profit slid about 20 percent year-on-year to €319 million ($373 million), as average fares fell 4 percent amid some overcapacity in Europe and an early Easter peak.

In the three months to the end of June, Ryanair noted that "staff costs increased by 34 percent primarily due to pilot 20 percent pay increases, nine percent more flight hours and a three percent general pay increase for our non-flight staff."

The Dublin-based carrier also pointed out that oil prices had "risen substantially from $50 per barrel at this time last year to almost $80 per barrel." The company said it still expected to achieve its annual profit forecast of €1.25 billion to €1.35 billion.

Despite the dip in profit, Ryanair said it had managed to increase its passenger traffic and revenue. "Traffic grew 7 percent, to 37.6 million, despite over 2,500 flight cancellations caused by ATC staff shortages and ATC strikes," Ryanair CEO Michael O'Leary said. Revenue increased 9 percent to almost €2.1 billion, the firm said.

The earnings update comes as Ryanair faces strikes this week by some pilots and cabin crew despite group efforts in recent months to improve pay and conditions. Some of the carrier's Ireland-based pilots will carry out a third one-day strike on Tuesday, resulting in the cancellation of 16 flights.

And the airline has cancelled 600 flights in Europe that had been due Wednesday and Thursday, owing to strikes by cabin crew staff in Spain, Portugal and Belgium.

"Despite signing pilot and cabin crew union recognition agreements in our major markets — the UK and Italy, and a recent agreement in Germany... progress has been slower in smaller markets," Ryanair said in Monday's statement.

"While we continue to actively engage with pilot and cabin crew unions across Europe, we expect further strikes over the peak summer period as we are not prepared to concede to unreasonable demands that will compromise either our low fares or our highly efficient model," it added.

Irish budget carrier Ryanair has confirmed it's canceling some 30 flights Thursday after pilots based in Ireland announced a 24-hour strike. They want the airline to meet their demands over new working practices. (12.07.2018)

Irish budget carrier Ryanair has announced it's buying a stake in new Austrian leisure airline Laudamotion. The move will help Ryanair secure a bigger foothold in Germany and Austria where it competes with Lufthansa. (20.03.2018)