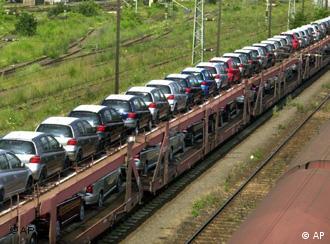 Carmakers find it hard to convince people to buy their cars

New registrations fell by 6 percent month-on-month, to 275,300 in May, the German Automobile Federation said Tuesday, June 3.

Releasing the data, the federation pointed to soaring gasoline prices and a delay in the new vehicle registration tax rules as key reasons for the drop in May car sales.

Oil prices climbed to a record high of $135.09 (87.45 euros) a barrel last month, helping to fuel renewed inflationary pressures in both Germany and Europe.

However, the federation said new car registrations were up 4 percent during the first five months of the year, as car sales rebounded from the steep decline following the government's hefty hike in Germany's sales tax at the start of 2007.

Despite the strong euro and the current global economic uncertainties, the federation also said that German car exports remained robust.

Since the beginning of this year, German car exports have risen by 3 percent compared with the same period in 2007.

German carmakers are enjoying a great start to the year as sales skyrocket. Some are even doing well on the US market, where a recession is looming. (08.03.2008)