The 2012 German Environmental Award goes to companies and researchers in the solar industry for developing technology that utilizes sunlight more efficiently than ever before. 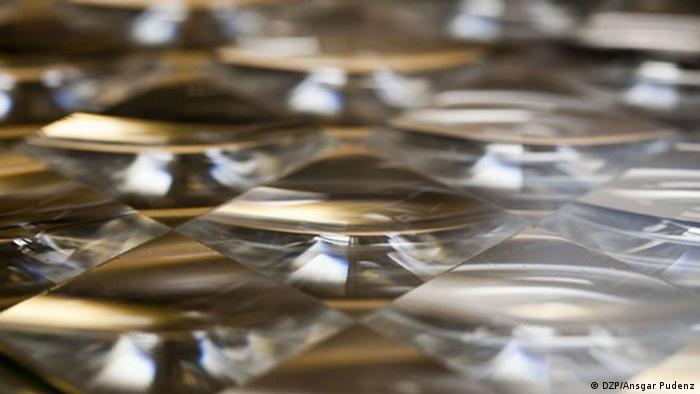 For Andreas Bett, the future will fit onto a tiny, pinhead-sized chip. In one smooth motion, the physicist pulls a small metal plate the size of a matchbox off the production line at his laboratory in Freibrug, Germany. He proudly points to the little, nearly invisible photovoltaic cell attached to it.

This solar cell is the stuff of Bett's visions for the future. After all, he speaks from experience. As deputy director of the Fraunhofer Insitute for Solar Energy Systems (ISE), he's been working on these multi-junction solar cells for over 25 years. Bett shares this year's German Environmental Award, presented by German Environment Foundation (DBU), with his teammate Hansjörg Lerchenmüller of Soitec Solar, and with Günther Cramer, co-founder of SMA Solar Technology. 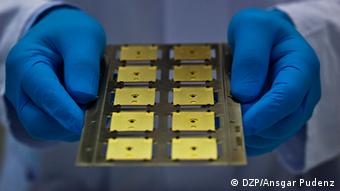 The conventional silicon solar cells of today are only able to transform a small portion of sunlight into energy. But Bett's solar cells can do a whole lot more. They use almost the entire spectrum of sunlight. To achieve that, the scientists working in Freiburg use three different materials to create a high-efficiency multijunction photovoltaic cell. Instead of silicon, they employ semi-conductors gallium-indium-phosphide, gallium-indium-arsenide and germanium, with each of the three materials transforming a different part of the light spectrum into electrical energy.

"We adjust our three solar cells stacked on top of one another - or semi-conductor structures - to the colors of the rainbow," explains Bett. The top layer uses the short blue wavelengths of light, the middle layer the green wavelengths, and the lower layer the long, infrared wavelengths. Only in this way can efficiency levels peak.

"One can calculate that with a semi-conductor material such as silicon, one can achieve a maximum theoretical efficiency of 33 percent," says Bett. Multijunction photovoltaic cells built at the Fraunhofer Institute, on the other hand, achieve over 41 percent efficiency. That's a world record. Never before has a solar cell transformed more light into electrical energy under laboratory conditions. 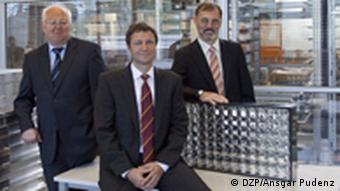 From left: Rasch, Lerchenmüller and Bett all have a sunny view of the future

Some 1,000 solar chips fit onto a round disc, or "wafer," that's about the size of a DVD. Klaus-Dieter Rasch, managing director of AZUR Space Solar Power, is proud that around 150,000 such wafers roll off the conveyor belt at his company each year, but such mass production was complex in the making. "We had to use standard systems from LED production, but found they were not good enough," said Rasch. So production lines and software were altered to better accommodate multifunction solar cell production - with the result that over 400 nonmilitary satellites tap their power via the photovoltaic cells bearing the "Made in Heilbronn" label.

But only an additional trick developed by the ISE scientists make the space solar cells cost-effective enough for use on Earth. Andreas Bett demonstrates the trick in the Freiburg laboratory. He places a metal plate covered with several photovoltaic cells into a rectangular-shaped box. He then clamps a matte silicon wafer over it. "The trick is to concentrate the sunlight with an optical lens and direct it onto a very small semi-conductor surface," he explains. 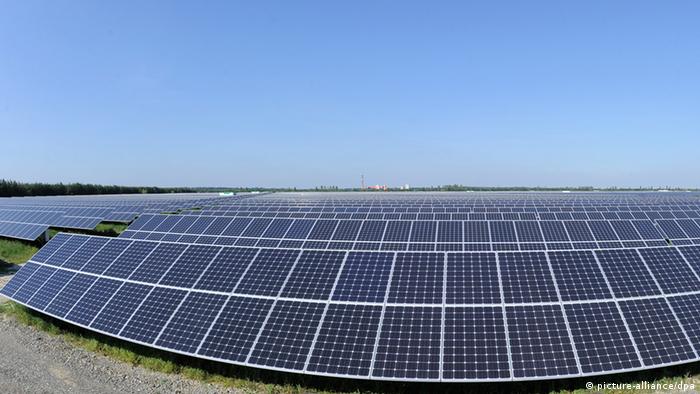 Solar is part of the bigger picture of alternative energy

This lens can concentrate the light by a factor of 500, thereby reducing the amount of expensive multijunction solar cells necessary by the same proportion. "Since I capture the light onto a relatively inexpensive lens and guide it onto one spot where a small, expensive semi-conductor material is located, I can generate relatively cost-effective power with the system as a whole," says the solar pioneer.

Heating up the solar market

Hansjörg Lerchenmüller heads up a major solar power company, which does business around the world. They have thirteen demonstration solar power plants are located in sunny countries such as the United States, Jordan and Spain. The first power plant went on the grid in Spain in 2007, with several hundred concentrator modules lined up next to each another, transforming light into power. Installed capacity of two megawatts supplies 1,000 households with clean power. 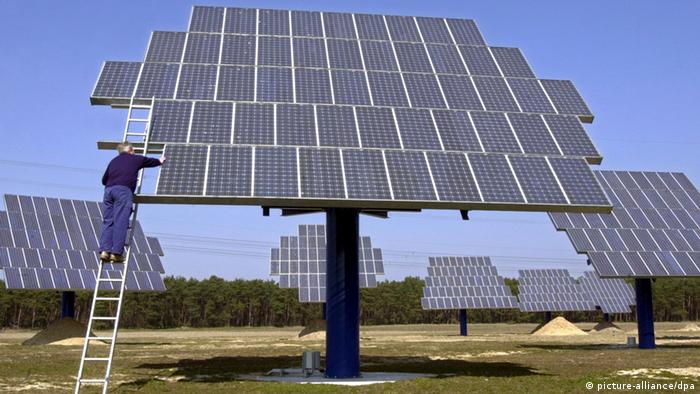 Sunny Greece is an excellent place for capturing sunrays

The breakthrough came in 2010, said the former Fraunhofer employee, when Soitec Solar built its first commercial concentrator photovoltaic plant in the US state of New Mexico. "It was a decisive project because it was the first time a power company had chosen the concentrator photovoltaic technology," Lerchenmüller said. Still, while he expects rapid market growth, especially in the United States, Lerchenmüller said the young technology has a lot of catching up to do. While solar plants around the world boast 33,000 megawatts of installed capacity, the concentrator technology is scraping by with 28 megawatts of installed capacity.

But research experts and companies alike say the future is bright for these tiny solar cells. Andreas Bett estimates that concentrator solar cells will gain up to a 15 percent share of the solar market in just a few years. "That won't be a small niche market anymore, but one worth billions," says the researcher.

The prime condition for success, however, is still a clear blue sky and lots of direct sunlight. Only then can the optical lens optimally capture and guide it, making the solar cell function properly. So the engineers of the concentrator photovoltaic technology have set their sights on the on the world's sun belt.

The sun may be setting on German solar research

Germany's solar industry is in a deep crisis, which threatens the country's leadership in photovoltaic research. Could the industrial crisis slow innovation? (15.08.2012)

Utrecht University students are learning to become sustainable entrepreneurs with a serious game called Solar Tycoon. But are serious games a substitute for real experience? (02.08.2012)