Diederich Hessling is an obedient, devious and nationalistic coward — a tyrant who tramples those who are weaker. Mann's novel is a scathing analysis of the German Empire just before the start of WWI. 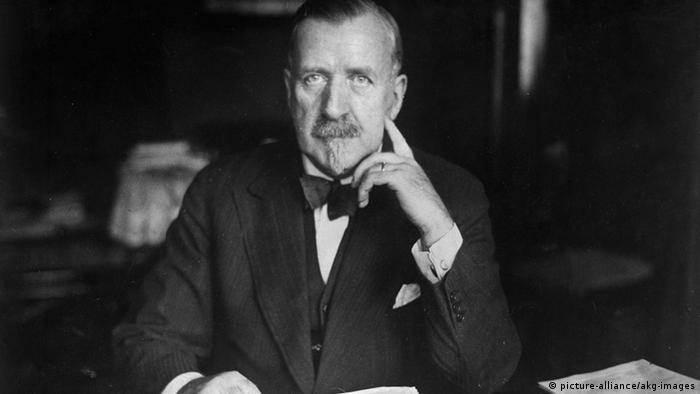 What is typically German? Diesel cars? Sandals with socks? Punctuality? Efficiency? Or is it a subservient spirit?

One hundred years ago, the writer Heinrich Mann created the German prototype that we in no way want to identify with today. It was a tyrant, who bowed to those at the top and kicked those at the bottom. A repulsive creature, nationalistic and devious. There were many people like Diederich Hessling in the German Empire. The book gives the reader an idea of why Germans were so enthusiastic about joining World War I.

From weakling to tyrant

"Diederich Hessling was a dreamy, delicate child, frightened of everything, and troubled frequently by earaches. In winter he hated to leave the warm room, and in summer the narrow garden, which smelled of rags from the paper factory, and where laburnum and elder-trees were overshadowed by the half-timbered gables of the old houses. Diederich was often terribly frightened when he raised his eyes from his story book, his beloved fairy tales. A toad half as big as himself had been sitting on the seat beside him, just as plain as day! Or over there against the wall a gnome, sunk to his waist in the ground, was staring at him! His father was even more terrible than the gnome and the toad, and moreover he was compelled to love him."

'The Loyal Subject' by Heinrich Mann

Diederich Hessling is the son of a man who owns a small paper factory in a made-up small city. He's a dreamy, sensitive child, but one who from an early age desires power and subjugation. He goes off to study in Berlin and is in the military for a short amount of time before managing to get out of his service. Yet despite this, he quickly feels intoxicated by his military buddies' patriotic phrases and by blind adoration for the emperor.

"'Hurrah!' shouted Diederich. He waved his hat high above all heads in enthusiastic madness, in a heaven where our finest feelings move. There on the horse rode Power, through the gateway of triumphal entries, with dazzling features, but graven as in stone. The Power which transcends us and whose hooves we kiss." 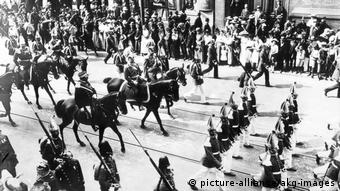 The German Emperor Wilhelm II parades down a Berlin street in 1913. Mann satirized society during his reign.

When his tyrannical father dies, Diederich returns home, where he not only takes over the paper factory but also manages to unscrupulously shut down his competition through intrigue and denunciation. He also grabs political power. His marriage, his starting a family: It's all coolly calculated. At the end his hometown devolves into a hotbed of opportunists and patriots blinded by nationalism.

Satire of the empire

In The Loyal Subject, Mann satirizes the German Empire while simultaneously delivering a scathing analysis of power structures under Emperor Wilhelm II. His work set today's standard for contemporary historical novels: They must be more than an entertaining plot taking place against a backdrop of current events. Mann also made no secret of his own political leanings, which he wove into the character of the old 19th-revolutionary Buck.

Buck is among those who were brutally disempowered by Diederich, and he dares to take a stand one last time at a public gathering and speak of ideals:

"The people's interests are at stake, and the people includes everyone except those who again make the mistake, which was made in my youth, of intrusting our welfare to bayonets."

Mann and his wife Nelly arrived in the US in 1940

Mann wrote The Loyal Subject between 1906 and 1914, and it initially appeared as a serial novel in a magazine. However, it was banned due to the World War I and was republished in 1918. The novel immediately sold nearly 100,000 copies — the one true great success Mann had during his lifetime. But the book was also heavily criticized, and Mann denounced as a traitor to his country.

Today the book can be read as a nearly prophetic vision of the even darker future that was to come. The servile subject in his destructive anger and emotional insensitivity is a forefather of German National Socialism that only a few decades later pulled Europe into the abyss.

Heinrich Mann (1871-1950) was the older brother of well-known German author Thomas Mann. His work was often intended as social criticism. Along with The Loyal Subject, Heinrich Mann's most famous novels include Professor Unrat (roughly translates as Professor Garbage) and two works focusing on the life of Henry IV of France. The Nazi regime stripped Mann of his German citizenship. He emigrated to France, Spain and finally to the US, where he died shortly before a planned return to Germany.