Heavy snow and high winds lashed Europe over the weekend, causing the deaths of at least 17 people in weather-related accidents and avalanches in Germany, France, Italy and Switzerland. 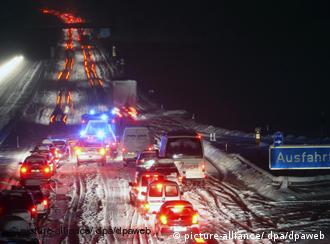 Thousands of people in France and southern Germany spent a night trapped in their cars, trains or emergency shelters after heavy snow blanketed the Alps, officials said.

Packed with holidaymakers on ski trips, much of the area was placed under a maximum avalanche alert, with authorities closing off access to many ski resorts.

Avalanches claimed two more lives in a season set to be one of the worst on record.

One avalanche at Diablerets in the southern Swiss Alps on Sunday killed a 45-year-old woman snowshoeing, while another in the northeastern Italian province of Trento killed a 28-year-old Norwegian man.

At the other end of Italy, on the French border, an avalanche trapped three people on Mount Jaferau but rescue workers were able to pull them out alive, the Ansa news agency said.

Most killed in Germany

Germany had the highest number of casualties, with 10 dead and hundreds injured due to accidents in heavy snow. 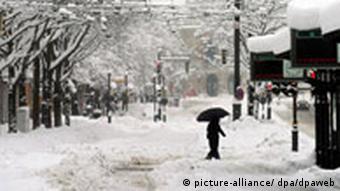 The central state of Hesse, dealing with the heaviest snowfall in 15 years, saw five accident-related deaths, while four were killed in neighboring Baden-Württemberg and one woman was run over while sweeping snow.

The deep snowfall extended into central France where late Saturday a woman about 70 years old died after being knocked down by a vehicle near the town of Charite sur Loire.

Two boys aged 10 and 14 died when a 40-kilogram (88-pound) rock fell on their family car Saturday near the village of Aussois in France's Savoie region, police said.

And a 25-year-old pregnant woman died on Sunday in Bouillargues, in the southern Gard region, when violent winds pushed the wall of a house under construction down on her.

In Switzerland on Saturday, a 17-year-old woman was also killed when scaffolding collapsed in winds which raged at between 60 to 80 kilometers (37 to 50 miles) an hour.

Authorities were forced to close stretches of motorways, leaving hundreds of cars stranded through the night Saturday on routes in eastern France and firemen relaying supplies to them to ensure passengers had sufficient food, water and warmth.

In the French Alps, 2,600 holidaymakers were put up by the town hall in Bourg-Saint-Maurice after the snow made travel impossible.

In southern Germany, too, hundreds of people were trapped on motorways Saturday, while a train en route from Düsseldorf to Milan spent the night stuck in the station at Singen with some 80 passengers because of snow on the rails.

In Switzerland, some 130 motorists spent the night at a civil protection center after the road between the capital Bern and the northeastern city of Zurich was blocked.

Flights at Frankfurt's international airport, Germany's largest, were wracked by delays on Saturday, as were those at the Munich airport -- where more than 40 centimeters (15 inches) of snow fell -- and rail traffic throughout the southern state of Bavaria. 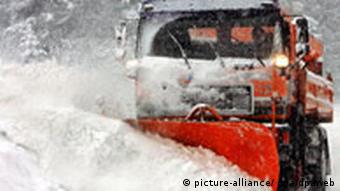 He'll be busy for at least a few more days

On Saturday night a Siberia Airlines plane with 166 passengers on board skidded off the frozen runway in Munich as tried to take off for Moscow, the police said, adding that nobody was injured.

At Munich airport several international flights were either cancelled or delayed during the weekend after more than 40 centimeters (15 inches) of snow fell over the southern city on Saturday. All public transport apart from the underground had also stopped running in the Bavarian capital.

On Saturday night a Siberia Airlines plane with 166 passengers on board skidded off the frozen runway as tried to take off for Moscow, the police said, adding that nobody was injured.

The weather services warned that more snow was expected over the region during the course of the day.

Police said they expected to see more traffic pile-ups on major highways, notably the one linking Munich with the Austrian city of Salzburg.

"Those who do not absolutely have to go somewhere should stay at home," a spokesman for the traffic police in Bavaria warned.

The number of people out of work in Germany moved back above the key level of 5 million in January, as the bad winter weather led to lay-offs in outdoor sectors such as the construction sector. (Jan. 31, 2006)

Bone-chilling Arctic weather claimed dozens more lives in Europe Monday after an already deadly weekend, with 24 freezing deaths in as many hours in Ukraine alone, and rising tolls in Turkey, Poland, Russia and Germany. (Jan. 23, 2006)