Sara Danius has resigned from her position as the permanent secretary of the Swedish Academy. The institution, which awards the Nobel Prize for Literature, has come under fire for its handling of a sex abuse scandal. 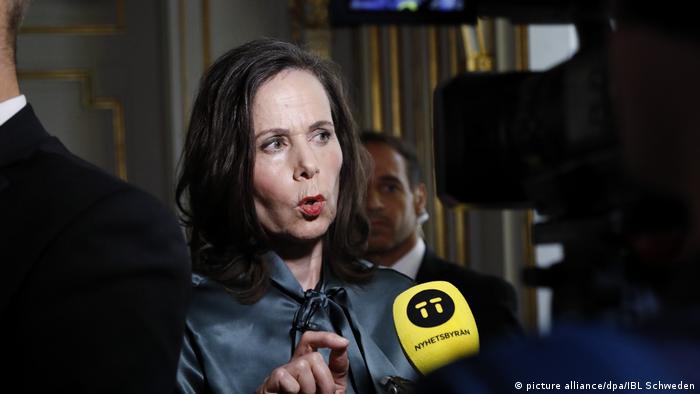 Sara Danius (pictured above), the first woman head of the Swedish Academy, established in 1786, announced Thursday that she is stepping down from her post.

Her resignation comes amid criticism regarding how the organization, which has picked the winner of the Nobel Prize for Literature since 1901, handled an investigation into allegations of sexual misconduct by a man married to one of its members.

"It was the wish of the Academy that I should leave my role as permanent secretary … and I have made the decision with immediate effect," Danius, who has held the position since 2015, told reporters. "[The sex abuse scandal] has already affected the Nobel Prize quite severely, and that's quite a big problem."

Until a replacement is found, Anders Olsson, who has chaired the academy's meetings this term, will replace Danius.

In November, the academy hired a private law firm to investigate sexual harassment allegations made by 18 women against Jean-Claude Arnault, the husband of academy member Katarina Frostenson.

Last Friday, three members of the institution — Peter Englund, Klas Ostergren and Kjell Espmark — withdrew from its board after a vote to expel Frostenson failed.

On Wednesday, King Carl XVI Gustaf, a patron of the academy, said the difficulties surrounding the probe "are very unfortunate and risk seriously harming the academy's important work."

However, Olsson confirmed on Thursday that Frostenson, a member since 1992, was also resigning, "hoping that the Swedish Academy would survive as an institution."

With Thursday's announcement, seven of the academy's 18 members have stepped down, casting doubts as to whether the organization can function properly. Members are appointed for life and cannot technically resign. However, there is nothing forcing them to actively participate if they choose not to do so.

State prosecutors have opened a preliminary investigation into the sexual abuse accusations, but said in March that some parts of the probe had to be shelved because of a lack of evidence and the statute of limitations having expired for some of the incidents.

Arnault's lawyer, Bjorn Hurtig, told Reuters in an email that his client "rejects all claims of criminal activity."

The academy cut all ties with Arnault, who ran a cultural club in Stockholm and was responsible for an apartment the institute owns in Paris, in November after the allegations.

Spacey is expected to appear before a London court on Thursday, according to British authorities.