Lewis Hamilton won his first race of the season on the drying streets of Monaco. But Red Bull's Daniel Ricciardo will rue a slow pit stop that likely cost the pole-sitter victory. Nico Rosberg finished only seventh. 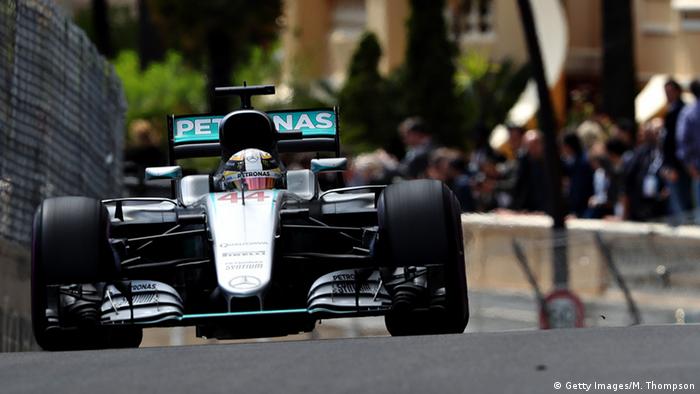 Lewis Hamilton clawed back valuable points against teammate Nico Rosberg in Monaco on Sunday, also winning in Monaco for the first time since the 2008 season. Rosberg, hunting a fourth win in a row around the principality's streets where he grew up, could only manage seventh place in difficult conditions. 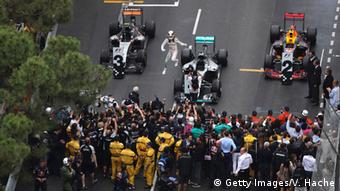 Hamilton hadn't won in Monaco since 2008, Rosberg missed the podium after three straight wins there

Mexico's Sergio Perez was the shock addition to the podium in third, securing a key result for Force India and team owner Vijay Mallya. Several drivers crashed in the difficult conditions, including Ferrari's Kimi Räikkönen and Spanish GP winner Max Verstappen, while the two Saubers of Felipe Nasr and Marcus Ericsson managed to crash into each other.

The race started under the safety car due to heavy rain, and in the early laps, pole-sitter Daniel Ricciardo pulled away from Rosberg and Hamilton, who had started third on the grid. Early in the race, Rosberg pulled over to let Hamilton pass and chase Ricciardo. Daimler Mercedes CEO Dieter Zetsche said on Sky Germany that Rosberg had recognized he couldn't win, and decided he didn't want to hamper his teammate's chances at victory.

Mercedes then used strategy to try to negate the Red Bull's advantage. While most leaders stopped to swap their full-wet tires for intermediate tires on a drying track, Hamilton elected to stay out on his wets, gaining the lead from Ricciardo. On twisty streets where overtaking is almost impossible, Ricciardo was quicker than Hamilton on old tires, but could not pass.

When the Mercedes pitted for dry tires, Ricciardo and Red Bull's mission was simple: put down one fast lap and one fast pit stop, trying to jump the Mercedes in the pits and regain the lead. Ricciardo laid down a quick enough lap as Hamilton tried to find the dry line on his slicks, but the Red Bull pit crew had no tires waiting at the stop. Even with a severe delay, Ricciardo came out right on Hamilton's tail, showing that the lead should have been his with a smooth stop. The Australian remained glued to Hamilton's gearbox for the remainder of the race, but couldn't find a way past.

"Save it, there's nothing you guys can say that will make it any better. Just save it," Ricciardo said on team radio after crossing the line. 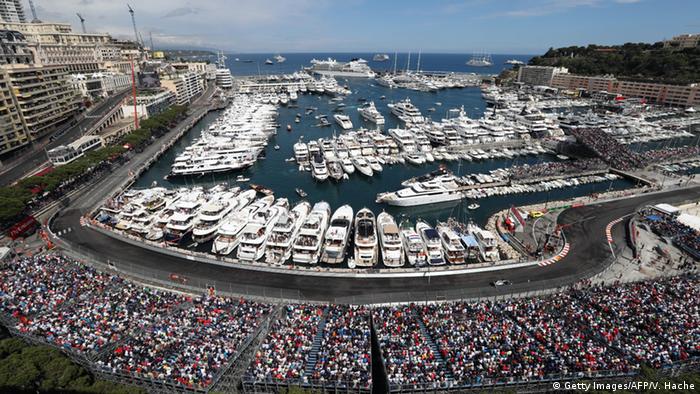 The weather improved throughout the race, but several drivers crashed out

The closest Ricciardo came to passing Hamilton, mid-way through the race, prompted some aggressive defense from the reigning champion. Hamilton shut the door coming out of the chicane and Ricciardo complained over the radio - the stewards investigated the incident but ultimately decided not to penalize Hamilton.

Sebastian Vettel had a quiet afternoon in the lead Ferrari, unable to make inroads against Sergio Perez of Force India in third.

Fernando Alonso bagged McLaren Honda's best showing in some time with a fifth place, while Nico Hülkenberg in the second Force India picked Rosberg's pocket on the last lap to claim sixth.

Rosberg finished only seventh, scoring 6 points to Hamilton's 25 - meaning his lead in the drivers' championship shrinks to 24 points.