Hamburg is again celebrating the cruise ship industry — and will provide thousands of visitors with a real spectacle. Environmental associations criticize the Hamburg Cruise Days as a false signal in the climate debate. 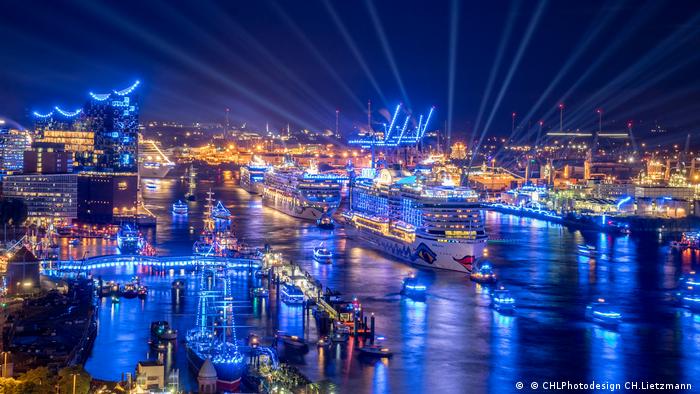 Even days before the giant spectacle, Hamburg's Hafencity is illuminated in a magical dark blue. Light artist Michael Batz has been staging the buildings and bridges of the metropolis on the Elbe for years. His project "Blue Port Hamburg" is intended to prepare residents and tourists alike for one of the biggest events Hamburg has to offer: The Hamburg Cruise Days. This weekend (September 13-15) is the seventh time that the large-scale party of the cruise ship industry will take place. And just like the industry itself, the event is also growing. Twelve ships will be present this weekend — a new record. The absolute highlight of the Cruise Days is the big parade on Saturday evening, during which five cruise ships in succession, together with numerous accompanying ships, will sail past the edge of the harbor under a grandiose firework display. About half a million visitors are expected to attend. And if you can't be in Hamburg, you can watch the ocean giants live on TV. 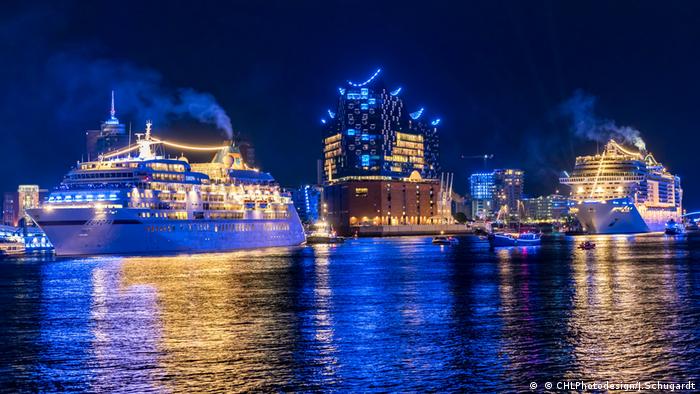 But not everyone is looking forward to the cruise ship party. Environmental associations have been criticizing the Cruise Days for years. Malte Siegert, head of the Nature and Environmental Policy Department at NABU Hamburg, considers them a "fun event that unnecessarily pollutes Hamburg's air". In an interview with DW, he criticized the fact that the organizers fail to inform people about the potential health risks of the event — even though they were aware of them. "This is a total failure on the part of politics and local authorities," says Siegert.

The organizers, on the other hand, argue: "We can't really warn the guests because we don't know whether this increased pollution even exists," says Katja Derow, head of the PR agency "redroses communications", which organizes the Cruise Days together with the "Bergmann Group" on behalf of the city of Hamburg. The limits were not exceeded at the harbor birthday party in May, although it was a much larger event than the Cruise Days, Derow explained to DW. The ships were coming to Hamburg this weekend anyway, the organizer added: "The only difference is that we will turn it into an event."

Cruises are lucrative for port cities — but opposition is growing

But why do you need such an event at all? The origin of the Cruise Days can be traced back to the Hamburg people's enthusiasm for cruise ships, their desire to travel, their wanderlust, explains Derow. Another reason seems to be much more important: the cruise ships are good business for the city. Hamburg wants to establish itself as an internationally trendy cruise ship destination in the highly competitive market. 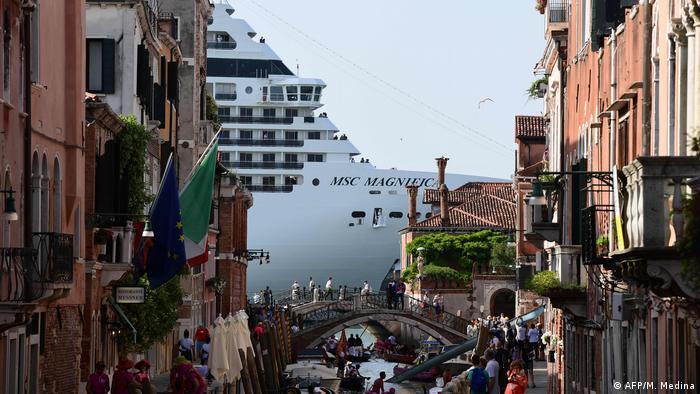 Many cities have had enough: After constant protests, Venice wants to ban cruise ships from the city

The NABU criticizes that the industry in Hamburg will "roll out the red carpet" and demands that shipping companies should invest a considerably larger share of their lavish profits into making their ships more climate-friendly. Although German shipping companies in particular have already taken the first steps in this direction, the current NABU cruise ship ranking is gloomy. The majority of the almost 400 cruise ships worldwide still operate on highly toxic heavy fuel oil.

And the marine diesel which ships use when in a harbor also contains 100 times more sulfur than car diesel. In addition, the flying visits by cruise tourists put such a strain on some cities that local opposition is growing and the cities are increasingly reducing the number of giant cruisers in their ports.

The industry is well aware of the problems that it is partly responsible for creating, says Cruise Days organizer Katja Derow. That's why this year's event will not only be an advertisement for the Elbe metropolis as a cruise ship destination but will also focus on the negative effects of cruise tourism. The organizers will provide a platform for tourism experts, representatives of overcrowded cities and pioneers of clean propulsion technologies to exchange ideas. 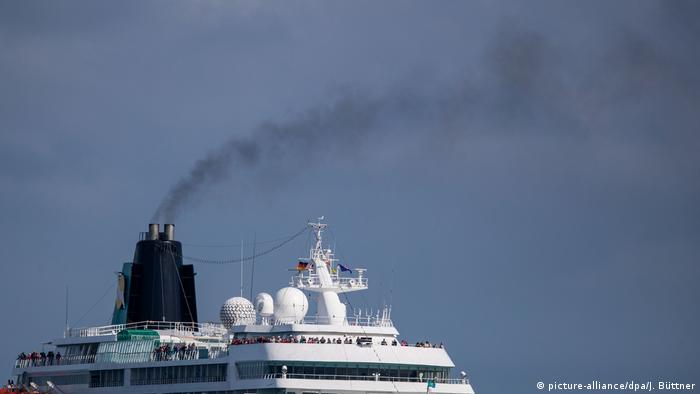 This is not enough for environmental activists like Malte Siegert from NABU in Hamburg. He demands: "The minimum requirement for such an event should be to only invite cruise ships that do much more than is legally required, in other words, to make the event a showcase for better, cleaner technology".

Organizer Katja Derow likes the idea and is optimistic: "I really hope and believe that these topics will no longer be an issue at the Hamburg Cruise Days in ten years' time". She argues the industry is enormously innovative and implements its new technologies effectively. The debate about the negative impact of cruise tourism will probably continue — at least until the Hamburg Cruise Days in 2029.

People are now aware of climate change. But almost no one wants to do without a holiday flight or cruise. A CO2 tax could change that, says tourism expert Wolfgang Günther. (19.08.2019)

There's massive public worry about diesel car emissions these days - but the really big polluters are plying our waters. (29.08.2017)