Halloween Reveler Spooks Train Passengers | News and current affairs from Germany and around the world | DW | 29.10.2007

A German Halloween reveler dressed as a blood-splattered zombie caused more than his fair share of frights when panicked passengers on a train mistook him for a murder victim and called the police. 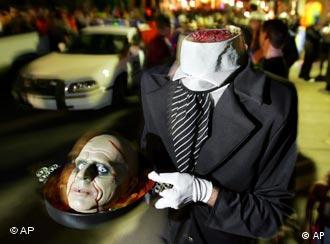 Wonder how the passengers would have reacted to this?

Maybe it had to do with the fact that celebrating Halloween is a relatively recent phenomenon in Germany despite the ghoulish festival's roots in Europe. Passengers on a regional train in Bad Segeberg in northern Germany had certainly never heard of it when they mistook a Halloween reveler for victim of a bloody crime.

The man in question was lying in a drunken stupor, dressed in a spooky costume and seemed to have what looked like blood smeared on his hands and face. The horrified passengers called the police after they failed to revive him.

Officers and a first aid team called to the scene soon cleared up the confusion after they shook the 24-year-old awake. 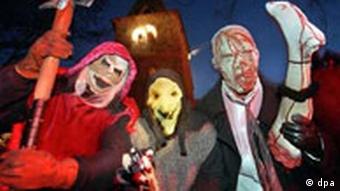 Witches and ghouls feature in Germany's Walpurgisnacht festival too

"He explained he was coming from a Halloween party in Hamburg and that his wounds were part of his gory outfit," a police spokeswoman told news agency dpa.

A paramedic scrubbed the makeup off the man's face and he was allowed to continue his journey.

"Bad Segeberg is in a rural area and Halloween isn't very well known there," the police spokeswoman said. "So people weren't expecting anyone to be dressed up in the train."

After two weeks of unexplained noises and moving possessions, a German woman took it upon herself to hunt down and confront the restless spirit responsible. (17.09.2007)

Here's a little test. You live in the western German state of North Rhine-Wesphalia and you need to transport a 1.5 meter (5 foot) snake to an acquaintance in southern Germany. To do this you: (25.07.2006)

Germans may have a reputation for being a little glum, but they're not all sourpusses. They can laugh or be laughable at times, and you can chuckle right along. Read up on the farcical side of Germany. (26.10.2007)

The suspect, who was reportedly dressed as the "Joker" character, was arrested for attempted murder after the stabbing rampage. He also started a fire on the train, with smoke filling the carriage.

The 41-year-old man will be admitted to a psychiatric clinic after shoving a boy in front of a train in Frankfurt last year. The case sparked outrage and prompted calls for better safety measures on train platforms.

A man who fatally shoved an 8-year-old boy at Frankfurt's main rail station has apologized at his trial. Prosecutors want the the man, a Swiss resident, confined to a long-term to a psychiatric unit.