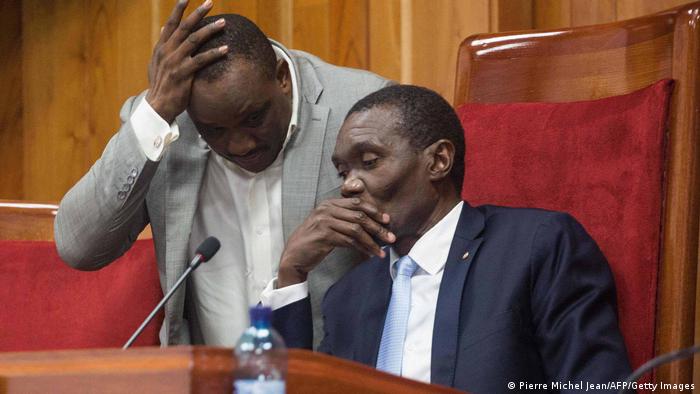 Joseph Lambert currently serves as the president of the Haitian Senate

It comes two days after Haitian President Jovenel Moise was shot dead in his home.

Yet, the move has been ignored by interim Prime Minister Claude Joseph. The United Nations views Joseph as Haiti's legitimate leader until elections are held later this year.

"I'm not interested in a power struggle," Joseph told the Associated Press news agency. "There's only one way people can become president in Haiti. And that's through elections."

The move by the Haitian senators will likely plunge the country further into a constitutional crisis.

Haiti's constitution states Moise should have been replaced by the Chief Justice of the Supreme Court, but he died of COVID-19 recently.

The interim government has asked for help from the US to protect key infrastructure during this period of political instability. "We definitely need assistance and we've asked our international partners for help. We believe our partners can assist the national police in resolving the situation," PM Joseph told AP news agency in an interview.

The US has offered assistance from the FBI to investigate the assassination. But a senior US official told Reuters there were no plans to provide military assistance.

Haiti after the assassination of Jovenel Moise

Joseph declared a two-week state of siege after Moise's killing.

At least 28 people were allegedly involved in the assassination, including two US citizens, police chief Leon Charles said on Thursday.

Columbia's police director said on Friday that 17 Columbian ex-soldiers are believed to have been involved in Moise's killing.

In order to deal with civil unrest following the assassination, Haiti has requested US and UN troops be deployed in the country. A senior US official said the there are no plans to provide Haiti with military assistance "at this time."

Moise assumed the presidency in February 2017 and was a controversial figure during his tenure in the role. Higher gas prices, economic problems and the government's response to the pandemic had led to protesters calling for his resignation in recent years.