Colombia's police director said some of the suspects "may have belonged to the national army" but later left the military. Haiti's interim government has requested troops from the US and UN to secure the country. 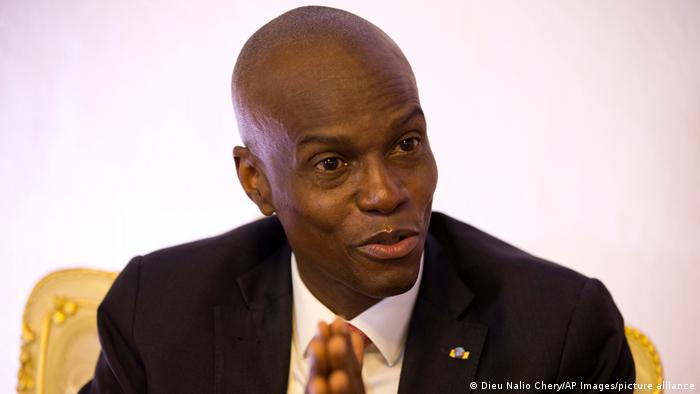 Moise had served as Haiti's president since February 2017

Colombia's top law enforcement official said on Friday that 17 former Colombian soldiers were believed to be involved in the killing of Haitian president Jovenel Moise.

National Police Director-General Jorge Luis Vargas Valencia said the men "may have belonged to the national army" of Colombia, but left the military between 2018 and 2020. Two of the men died during the standoff with the Haitian police.

The Colombian police chief did not give any information on why the men had left the military.

Vargas said four unnamed firms had been involved in the "recruitment, the gathering of these people" tied to the assassination. The law enforcement official said two of the Colombian men traveled to Haiti via Panama and the Dominican Republic in early May.

Vargas said a second group of 11 Colombian suspects traveled to Haiti via the Dominican resort city of Punta Cana in early June.

Haitian officials claim Moise was killed by a 28-member hit squad composed of 26 Colombians and two Americans of Haitian descent.

So far, 17 suspects have been arrested over the assassination.

Haiti calls on US to send troops

The killing of Moise has plunged Haiti into chaos.

Haitian Elections Minister Mathias Pierre requested on Friday that the US send troops to the country to protect key infrastructure. Haiti has also called on the UN to deploy soldiers to secure the country, which would require approval from the UN Security Council.

Haiti's ambassador to the US requested President Joe Biden's administration to impose sanctions on all suspected perpetrators behind the assassination.

Both the US and Colombia have agreed to send law enforcement personnel and intelligence officials to assist Haiti. The US has offered the FBI's assistance in investigating the assassination.

The Washington D.C.-based think think Center for Economic and Policy Research reported Friday that the head of Haiti's palace guard, Dimitri Herald, is the subject of a US arms trafficking probe. Herald is one of the top individuals responsible for Moise's safety.

Moise was a controversial figure in Haiti, with protesters in recent years calling for his resignation due to increased fuel prices, economic problems and the government's handling of the coronavirus pandemic.

The UN views Acting Prime Minister Claude Joseph as the leader of the country until elections are held later this year.