The strongman has won a third term in office with 98 percent of the vote. Many observers see the Turkmen election as a phony vote controlled by the president's authoritarian regime. 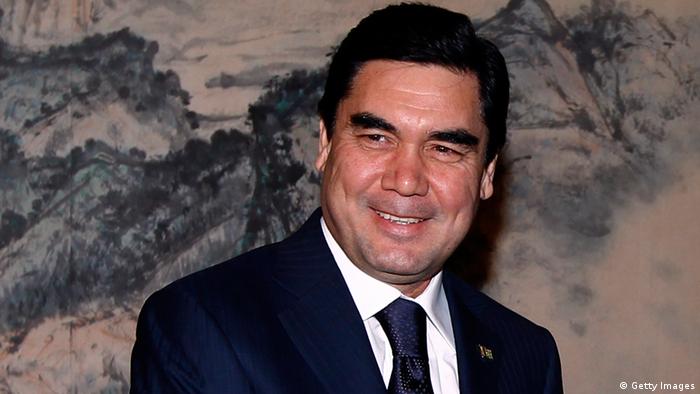 Despite the president's claim of a free and fair election, Turkmenistan is a closed society in which dissent is prohibited. Like his predecessor, he has created a cult of personality. (12.02.2017)

Officially, there are several candidates and a campaign for president. In reality, Gurbanguly Berdymukhamedov will be re-elected leader of Turkmenistan. (10.02.2017)

Ahead of next year's elections, Turkemenistan has altered its laws on presidential terms. The most significant change will allow the country's leader to serve indefinitely. (14.09.2016)

Turkmenistan's President Gurbanguly Berdymukhamedov has amended the country's constitution for the second time – and he will benefit. Experts view the strengthening of presidential powers critically. (03.03.2016)

Diplomats Call for Stability After Death of Turkmen Leader

Foreign leaders Thursday called on officials in Turkmenistan to ensure stability in the gas-rich Central Asian country after the death of its authoritarian President Saparmurat Niyazov. (21.12.2006)

Turkmenistan's sitting president Gurbanguly Berdymukhamedov received 97.69 percent of all votes in the presidential election, the Central Election Commission announced on Monday. This secures Berdymukhamedov a third term in office, as many had expected.

In Sunday's election, the president competed against eight other candidates who were viewed by many as token opponents. The candidates were allowed to meet with voters in theaters and cultural centers, but these events were not televised and no debates were held. All eight had expressed support for Berdymukhamedov's government.

Election Commission chairman Gulmurat Muradov told reporters that the results were preliminary because election authorities had not yet counted the ballots cast at the country's embassies abroad, though changes due to these votes will likely be negligible.The results are on par with those from the 2012 election, when Berdymukhamedov received roughly 97 percent of the votes.

Election officials claimed that almost all eligible voters cast their ballots on Sunday, saying that turnout was above 97 percent.

Last year, Berdymukhamedov had approved several constitutional changes that could allow the 59-year old to rule for the rest of his life. The reform removed the upper age limit of 70 for presidential candidates and extended the presidential term from five to seven years.

"If I am elected, then our policies aimed at improving the welfare of the people will continue," Berdymukhamedov had said when he went to the polls on Sunday. The president claimed that the vote would decide "the fate of the people for the coming seven years".

Turkmenistan is one of several ex-Soviet countries in Central Asia ruled by an authoritarian strongman, where elections strongly favor those in power.

It has recently struggled under the falling gas prices. The small desert country of 5.2 million is home to the world's fourth largest natural gas reserves and largely relies on the export of its natural resources. The country is highly dependent on China, which buys three-quarters of its gas.

Berdymukhamedov became president when Saparmurat Niyazov died in 2006. Niyazov, Turkmenistan's first head of state after the fall of the Soviet Union, had styled himself as "father of the Turkmen people." 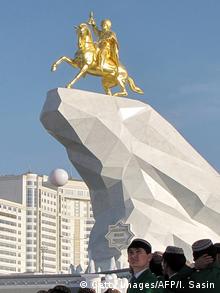 Berdymukhamedov initially promised make "moderation" the guiding principle of his presidency, but quickly disappointed hopes that he would democratize Turkmenistan or open up the largely isolated, gas-rich state to the wider world.

The president has spent large amounts of government funds on showy monuments. The presidential palace in Ashgabat erected under Berdymukhamedov is reportedly worth 234 million euros  ($250 million) and listed in the Guinness Book of World Records as the building with most white marble in the world. In 2015, a golden statue of the president on his favorite horse was unveiled in the capital.

In the solely state-controlled media, Berdymukhamedov enjoys largely fawning coverage. Newspapers dedicate their front pages to poems the president wrote, and national news broadcasters cover even the president's smallest actions, including his attempts at DJing at his grandson's party.