Guinea votes as president seeks to extend decade in power 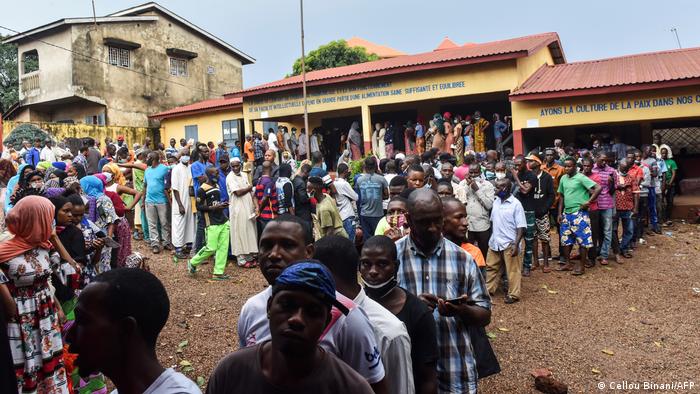 Earlier in the day, Guineans lined up to cast their vote in the country's capital of Conakry. Heavy rainfall overnight caused some other voting stations to open later.

Conde, 82, is seeking a third term after a change in the country's constitution allowed him to run in this year's election. At least 50 people have been killed this year in protests against his electoral bid, according to Amnesty International.

After casting his ballot at the Boulbinet elementary school in Conakry, President Conde called for a "free, democratic and transparent election" and hoped it would take place "calmly and peacefully." 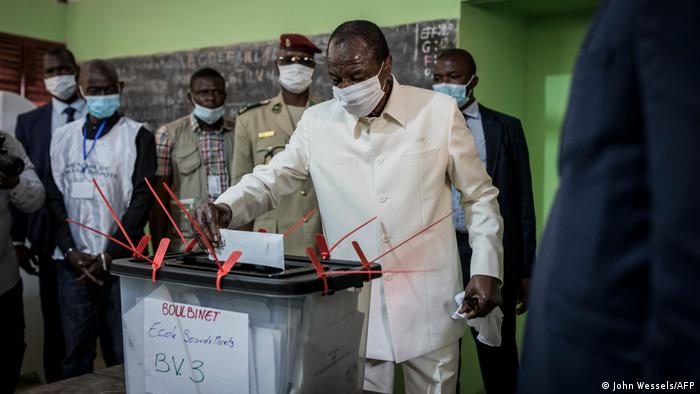 Alpha Conde casts his ballot in the Guinean capital of Conkary

"Guinea can only develop if there is peace, security and unity. I appeal to all candidates to refrain from violence," he said.

Some 12 candidates are in the running, including two women.

Who are the main candidates?

Conde, 82, has lead Guinea for the last 10 years. He came to power in 2010 in the West African nation's first democratic elections since independence from France in 1958.

Many saw his presidency as a fresh start for the mineral-rich country. Guinea has made progress in developing its mineral riches under his leadership, with gross domestic product doubling during his presidency.

But Conde's opponents have criticized him for failing to improve the lives of Guineans, most of whom live in poverty despite the mining boom.

Conde is able to run for a third term due to a change in the country's constitution in March. He has insisted that the change is broadly approved by voters, denying that he carried out a constitutional coup d'tat in a recent interview with Radio France Internationale. 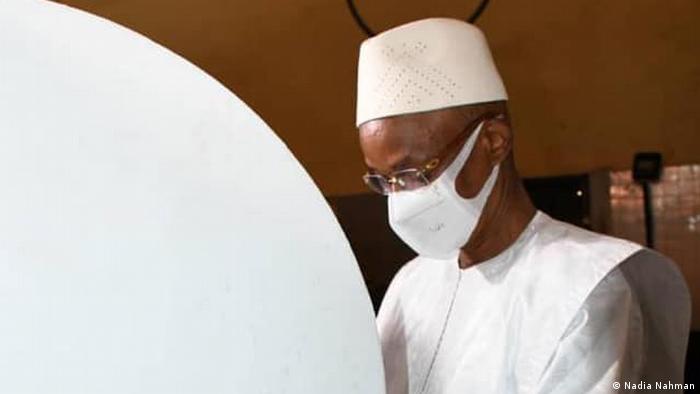 The incumbent's main opponent is Cellou Dalein Diallo, who leads the main opposition party in Guinea's National Assembly. Diallo has accused Conde of attempting to rig the vote and, by changing the constitution, "grant himself a presidency for life."

At a press conference, Diallo accused his opponent of trying to "cheat," but urged his supporters to "show restraint" when the results emerge.

"I have no doubts about the outcome of the election, which is why I do not want violence to disrupt the ballot and jeopardise my victory," the 68-year-old said.

Diallo has condemned Guinea's high unemployment rate and human rights abuses over the past decade under Conde's leadership.

Conde and Diallo draw their support from Guinea's two largest ethnic groups, the Malinke and the Peuhl. Previous electoral matchups between the two have seen intercommunal violence.

There were no immediate reports of unrest on Sunday, but several people — including one presidential candidate — said they'd been turned away from polling stations due to problems with their voter cards.

Although some voting irregularities have been reported, those who oppose a third term for Conde are more concerned about what happens once the polls close.

"I think the risk comes afterwards when the results are announced," Tierno Monenembo, a Guinean writer and member of the anti-Conde coalition FNDC, told DW.

Should Conde be declared the winner outright after the first round of voting, "there will be unrest," he cautioned.

DW's Bangaly Conde and Eric Topona contributed to this report.

Guineans head to the polls on October 18 in a tense presidential election pitting two former rivals. Incumbent President Alpha Conde is seeking a third term that has already triggered deadly violence during protests.