Guinea-Bissau: Are drug cartels behind the attempted coup?

It is still unclear who is behind the attempted coup in Guinea-Bissau. President Embalo claims that the coup plotters wanted to end his fight against drug trafficking. But what about the role of the political elite? 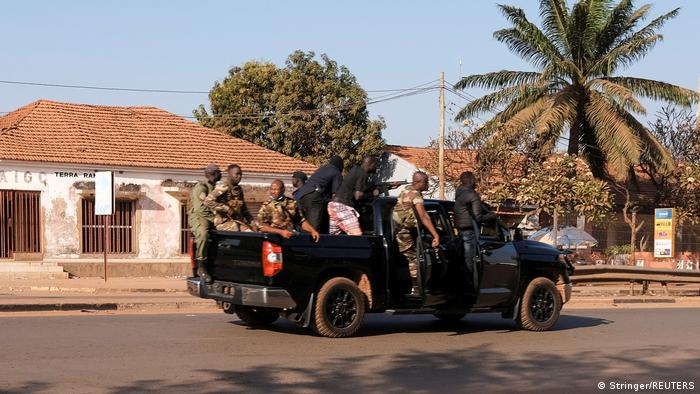 After shots were fired at the government complex, soldiers were seen on the streets of Bissau

"It was a cold-blooded attack. And the perpetrators were certainly not members of our armed forces. They rather were people from the underworld, who wanted to prevent my fight against international drug trafficking.”

Those were the words of Guinea-Bissau's president, Umaro Sissoco Embalo, speaking to an assembled press corps on Tuesday night. Just hours before, a bloody shootout had taken place at the government buildings, followed by an hourslong siege at the complex that houses not only the official residence of the head of government, but also all of the country's ministries.

Unknown individuals also fired projectiles, allegedly with bazookas. 11 security personnel were killed — all of them members of the presidential guard.

Embalo — himself a former general — appeared cool and determined throughout his speech.

"The perpetrators were certainly killers finances by the drug mafia," he repeated on multiple occasions — despite insisting that he did not want to jump to any conclusions in the ongoing investigation.

Above all, he stressed that the government had been able to repel the attack and that the situation was under his control.

Epifania Fernandes, a journalist for the independent newspaper O Democrata, was a witness to the attack. She had gone to the government palace on Tuesday morning to report on a cabinet meeting when she suddenly heard bazooka shells.

"Inside the government building, everyone panicked," she told DW. "Then we heard a lot of pistol shots. I ran from hall to hall, ministry to ministry, and finally hid in a toilet. Only after more than five hours, at 5 p.m. in the afternoon, could I feel reassured that it all was over and that we could leave the government building. We were all in a state of shock."

Fernandes went on to describe the perpetrators she saw: "Whether it was hit men paid by the drug lords or soldiers, I cannot say with certainty. However, I saw several armed people in civilian clothes who were not recognizable — at least externally — as soldiers.”

Domingos Simoes Pereira, head of the largest opposition party in Guinea-Bissau, the African Party for the Independence of Guinea and Cabo Verde (PAIGC), told DW that it wouldn't be "advisable" to go along with the president's simplistic explanation. 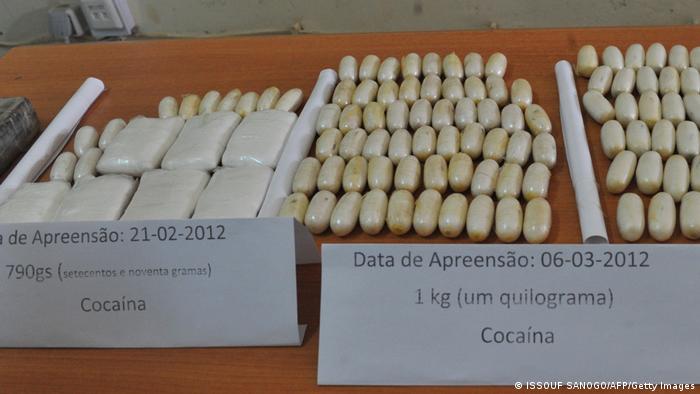 Part of a shipment of cocaine seized in 2012. Guinea-Bissau is one of the major hubs of trafficking in Africa

"[Embalo] is presenting himself as a fighter against the drug mafia in order to lull the international community into complacency," Pereira said. "But the citizens of Guinea-Bissau want to know what is really behind this alleged coup attempt. Who were the people who carried out this coup? How many were there? Who was in command of them? What were their real goals?"

The president has so far failed to provide answers to any of these questions, Pereira said, adding that some observers are openly speculating that Embalo himself may have staged the coup.

"Such a coup would be an ideal pretext to intensify his purge of internal critics and opposition figures," Pereira said.

In the hands of drug cartels

There is currently no evidence to support the theory that the drug mafia commissioned the attack. However, this theory cannot be dismissed altogether either: Guinea-Bissau is considered an important hub for drug trafficking — especially for cocaine.

Since achieving independence from Portugal in 1974, the West African country has experienced nine coups and attempted coups, as well as several political assassinations. Some of these have actually been attributed to drug cartels, which have had a firm grip on the country since 2005.

According to the United Nations Office on Drugs and Crime (UNODC), Guinea-Bissau is now one of the most important gateways for cocaine coming from South America to Europe.

"Organized crime will do whatever it wants in Guinea-Bissau," Calvario Ahukharie, the former head of Interpol in Guinea-Bissau, told DW. He said the fight against the cartels was practically impossible to win, as many capos are rumored to be in cahoots with military officials and politicians.

"The drug lords from South America go in and out of our country whenever and however they please," Ahukharie said. "They subjugate the politicians. They are the real rulers in our country."

A gateway to the drug trade

Ahukharie said large quantities of drugs were casually smuggled into the country on large ships, inside packages weighing up to 200 kilograms (450 pounds). The government in Guinea-Bissau, he says, will likely leave this drug mafia alone and let them reign as they please.

In return, the political elites will be paid off — with money or even with drugs.

"The drug lords feel right at home in Guinea-Bissau, like they are in paradise," Ahukharie said.

Guinea-Bissau began its transformation into a narco-state in 2005, when longtime president Joao Bernardo "Nino" Vieira — who had ruled the country with an iron fist from 1980 to 1999 — was reelected after returning from six years of exile in Portugal.

Vieira allowed the Colombian drug mafia to seize the country. Guinea-Bissau's numerous islands, which were virtually uncontrolled by the state, were used as a station to bring in cocaine from South America en route to Europe.

The drug lords had nothing to fear from Vieira, Ahukharie said:"On the contrary, Vieira paved the way for the drug cartels to have free reign, and in return he received a share of their profits."

But, soon, Vieira came into conflict with rivals in his own military. In March 2009, he was assassinated by his own soldiers.

Military in cahoots with cartels

After Vieira's death, the drug smuggling business continued to thrive in Guinea-Bissau: In April 2013, navy chief Jose Americo Bubo Na Tchuto was lured into an intelligence trap set by agents of the US Drug Enforcement Agency, who arrested him on the high seas in international waters, making his extradition merely a formality.

Bubo Na Tchuto provided US authorities with important information and names of key players in the trade. He was consequently released from prison soon after his court conviction, so that he could return to Guinea-Bissau.

Observers are certain that pockets of Guinea-Bissau's army are still involved in drug trafficking. But some of the senior military officials in Guinea-Bissau have reportedly become more cautious, trying to fall under the radar.

In the wake of the recent coup attempt, one name keeps coming up again and again: Bubo Na Tchuto — even though he is no longer active in the military.

What has two wings and won't fly?

An airliner parked at the airport of the capital, Bissau, since October 2020 has been the subject of much discussion in recent months — especially with regard to the state of corruption and active collaboration between government and military officials and drug cartels.

The relevant authorities don't know who owns the Airbus 340 aircraft, nor what it was carrying when it landed there. Investigations into this mysterious state of affairs have been repeatedly postponed or avoided.

President Embalo, however, still fancies himself as a committed fighter against international drug trafficking. He refuses to draw any connection between the wayward plane and the drug cartels operating in his country. 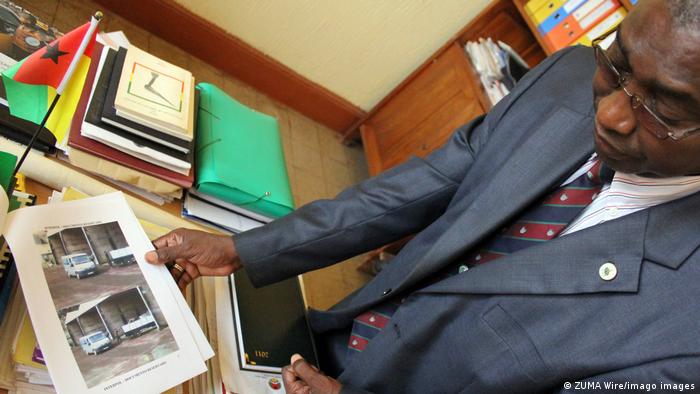 Embalo's stance has caused much outrage, not only among the opposition and civil society, but also in his own government.

"I'm not sure if this president really has what it takes to style himself as a leader in the fight against the drug cartels in the country," said Pereira, the opposition leader. "We also have information about the movement of boats in our territorial waters for which there are no plausible explanations."

Pereira may not be as innocent as he makes himself out to be: He and his own party have also been repeatedly accused of having links to the drug cartels that operate in Guinea-Bissau — and quite openly so.

Still, Pereira has repeated his calls to the international community to not accept the president's "simplistic statements" surrounding the attempted coup.

Whether Pereira is involved in the drug trade or not, his message seems to have fallen on dead ears: The Economic Community of West African States (ECOWAS) appears to agree with the president's version of events — at least for now — and has praised Embalo's efforts against the drug mafias.

The international community has only condemned the coup attempt for what it is: an attempt at seizing power without going through democratic processes. There's been no mention of the South American drug wars being played out on African soil. At least not yet.

Braima Darame contributed to this report.