Germany on trial? Heirs of the Jewish art dealers that sold the medieval Guelph Treasure to the Nazis have brought their claim to a US court. The Prussian Cultural Heritage Foundation president refutes the claim. 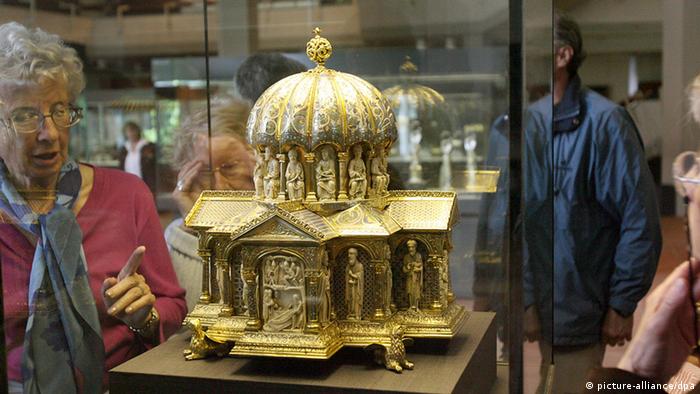 German authorities deemed last year that the Guelph Treasure, $250 million (220 million euros) worth of goldsmith works from the Middle Ages, was not stolen by the Nazis but rightfully sold to them in 1935 by a group of Jewish art dealers. Now, a year later, the art dealers' heirs have filed a lawsuit with a US court.

DW: Mr. Parzinger, were you surpised by the lawsuit filed by the heirs of the German-Jewish art dealers?

Hermann Parzinger: Yes, I am surprised and also a bit confounded. There had been no indication from the plaintiff that a lawsuit was in the works. I'm confounded in particular because the plaintiff requested that the Limbach Commission clarify the situation a while back and we didn't refuse.

The plaintiff's lawyers personally ensured me that they would accept the decision, no matter how it turned out. Now they are doing just the opposite. They have called the process a mock trial and even suggested they were experiencing the same discrimination their relatives had faced during the Nazi era. Such a comparison puts me at a loss for words. I think it's simply outrageous.

[Eds: The Limbach Commission is the German organization responsible for restitution claims on Nazi-looted art.]

When the Limbach Commission said in the spring of 2014 that it saw no indication that the Guelph Treasure had been unlawfully misappropriated by the Nazis, the heirs said at that time that they would not be satisfied with this decision...

Yes, they said that, but then we didn't hear anything for a year. One could have presumed that a situation like this was being planned, but it still came as a surprise.

What prospects do you think the case has?

We are actually quite confident and take a relaxed view of the situation. We have done our research over many years. We have numerous files full of facts with which we can back up the points that need to be reconciled with the Washington Conference on Holocaust-Era Assets. Those are, for example, the appropriateness of the price at which the art was sold for during the Nazi era and how disposable the proceeds were.

We are quite curious which new facts the plaintiff will present. There doesn't seem to be any significant new aspects. Of course we will examine the claim very carefully together with our lawyers when we receive it. Then we will have to see whether the US court accepts the lawsuit. But no court in the world can ignore the facts and that's why we are relaxed about the situation, no matter which scandalous words the plaintiff chooses to use.

In your opinion, are the circumstances surrounding the purchase of the Guelph Treasure by the Nazi government in 1935 completely cleared up? It's not fully known who belonged to the consortium of dealers which bought the treasure…

Yes, but that is the task of the claimant. The Limbach Commission should in principle have never taken on the case. The claimants maintain the position that 95 percent of the Guelph Treasure belongs to them. But it's not our job to prove who has claim to it. It's our job to prove that the purchase price was fair and that the revenue was disposable.

One of the dealers, Saemy Rosenberg, who led the purchase negotiations, was located in Amsterdam. That's also where the Guelph Treasure was located - outside of the German Reich. Negotiations took place there.

In exchange for his share, Rosenberg - as was his choice - was able to select objects from Berlin's museums. He was so happy about this that he gifted a Venetian glass chalice to the Kunstgewerbe Museum in Berlin in 1935.

So in your opinion the sale has been completely cleared up?

Nazi leader Hermann Göring had called the Guelph Treasure a "national holy relic" and had vital interest in reclaiming it for the German Reich. The Jewish art dealers in the consortium were preparing to emigrate. Couldn't every art sale conducted during this time be characterized as a forced sale?

Constantly referring to Hermann Göring paints a certain picture: The Nazi criminal Göring sitting there across from the fearful art dealers. But it wasn't like that. A certain amount of lobbying was necessary to convince the ministry of finance and the Prussian State to provide the money: that was, 4.2 million Reichsmarks. Today that would be around 100 million euros ($113 million).

The consortium approached the German state - not the other way around. Of course a person like Göring took the opportunity to adorn himself with the sale and say, look at what we've managed and what our predecessors were never able to do.

The Guelph Treasure was recently added to Germany's list of cultural goods. That means that the minister of culture must give permission for it to be removed from Germany. Was that a preventative measure to limit the plaintiff's chances of placing claim to it?

No, protecting the treasure doesn't limit the chances of the lawsuit. It is the policy of the culture minister to protect German cultural goods from leaving the country. It was a coincidence that it happened at the same time, but such lawsuits usually last for many months. We also put Alexander von Humboldt's American travel journals under protection.

The plaintiff has argued that it shows that Germany has a problem with lawsuits like this.

They may say that. But we don't have a problem. If we lose the case in the US court, then our protection law no longer provides any protection. That's not the point - rather, it's about facts. That has to be the focus in court. And I'm curious which new findings the plaintiffs will present.

What would the consequence be if they win the lawsuit?

That would mean looking into a crystal ball. One can't speculate about compensation. But I don't think it's possible that the whole case will be reserved. All the evidence we have already provided cannot simply be wiped off the table.

Hermann Parzinger, an archeologist and pre-historian, has been president of the Prussian Cultural Heritage Foundation in Berlin since 2008.

Nazi-looted art: Why Germany hasn't dealt with it

Eighty years after the Nazis looted many famous artworks from museums and Jewish owners, Germany is still failing to deal with the issue, says Anne Webber from the Commission for Looted Art in Europe. (24.11.2014)