Guatemala has one of the world’s highest levels of chronic malnutrition in the world. The government has responded with an ambitious zero-hunger strategy but entrenched inequality and poverty are complicating the fight. 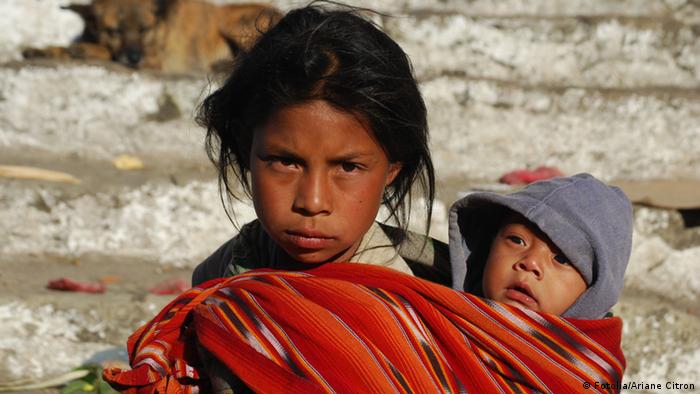 Guatemala's Vice President, Roxana Baldetti knows how to work a crowd. On a recent visit to Pamumus, a village in the mountains outside Guatemala City, Baldetti asked residents what color they see when they look towards the fields and hills around their village. “Green!” the crowd shouted. “Yes, we are a green country,” Baldetti said. “So there is no reason why children should go to bed on an empty stomach.”

Most of the residents of Pamumus are smallholder farmers, growing corn, wheat, beans and vegetables. But the seeming agricultural abundance doesn’t pay. They earn just over 2.50 euros ($3.42) a day. That simply isn’t enough to provide their families with a diverse diet, Arnulfo Alvarez, a local doctor, said. 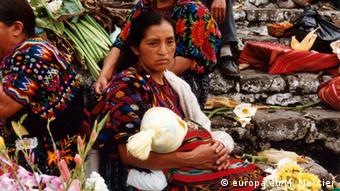 “The fundamental diet here is basically corn and coffee. Maybe once, twice or three times a week beans,” Alvarez told DW. “There is a shortage of proteins and vitamins and a shortage of some minerals that are fundamental in the development of a child's growth, especially in the first five years of its life.”

It’s a pressing challenge and one that has now climbed to the top of the government’s agenda. Last year, the administration led by President Otto Pérez Molinait signed a Zero Hunger Pact that aims to cut chronic malnutrition levels by 10 percent by the end of 2015. Vice President Roxana Baldetti’s recent visit to Pamumus was meant to reaffirm the government's commitment to combat hunger.

The government has begun providing vitamins and food supplements, which doctors like Arnulfo Alvarez and his staff hand out to needy children. The program also includes providing better seeds to farmers and campaigns promoting breastfeeding and general hygiene. The five-year program has a budget of around 40 million euros. 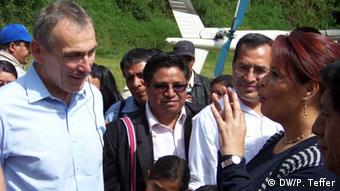 Piebalgs said development aid remains an important tool to reduce malnutrition. Referring to the debate on whether developing countries benefit more from trade or aid, Piebalgs said both are needed.

Adrián Zapata, Guatemala’s Presidential Commissioner for Rural Development, said hunger can only be tackled with a more structural solution – one that goes beyond food and vitamin handouts.

“In a country where generalized poverty with profound inequality come together in a context of exclusion, the effect is dramatic. This is not something which was caused by the previous government, or the ones before that," Zapata said. "This is a product of a long historic process.”

Guatemala has high levels of inequality both in terms of income and land distribution. The poor are predominantly indigenous and live in rural areas. The country has one of the highest levels of land concentration, where just 2.5 percent of landowners control 65 percent of arable land.

About half of the country’s population is indigenous and for years, they suffered persecution and marginalization. During the 36-year civil war that ended in 1996, 80 percent of the casualties were indigenous Guatemalans. Today, they still continue to face discrimination. And it is among the indigenous Mayan people that malnutrition rates can be as high as 90 percent.

The Zero Hunger Pact acknowledges that malnutrition is mostly a problem in rural areas. But not all Guatemalans believe the government is sticking to the promises made in the agreement. 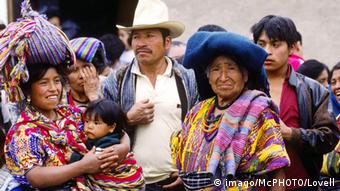 But the leaders of the indigenous municipality here say they have not seen any of the promised international aid arrive in their community.

For now, the government says it has decided to provide targeted aid to a few select municipalities. It will probably be some time before a nutritious and diverse diet becomes a reality for every Guatemalan.

Commodity speculation put to the test

The connection between commodity speculation and higher prices for grains has long seemed clear. But now a new study shows that the opposite could be true and that competition could keep food prices down. (18.10.2013)

Indigenous communities of northern Guatemala have been given the right to make a living off their tropical forests, preventing illegal logging and destruction. The project helps save the forest as well as combat poverty. (15.10.2013)

Some progress made towards reducing child mortality

One of the Millennium Development Goals (MDGs) calls for a significant reduction of child mortality by 2015. Two years before the deadline, some countries have already reached that goal. (27.09.2013)