On the right, a cow, and on the left, a Rolex watch. Alpine idyll and luxury: that's Gstaad in Southwestern Switzerland. But this vacation destination is, like many others, being affected by climate change. 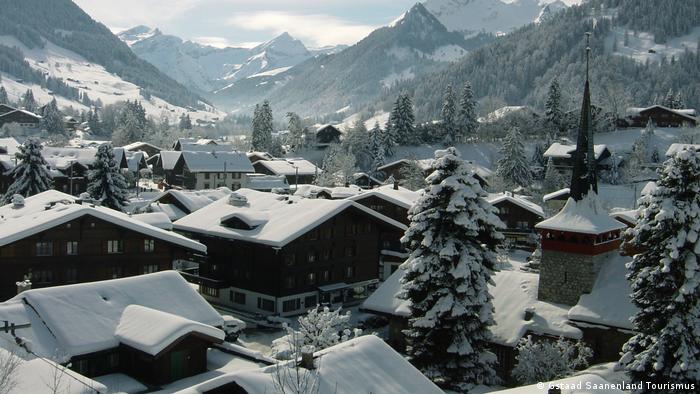 Like a heraldic emblem, the five-star Palace Hotel, with its crenellated and pointed turrets, sits atop the hill overlooking the rustic village of Gstaad. Here, farms and Bentleys go together like skis and poles.

Gstaad has about 3,000 residents and just as many cows. They adorn the leaflets and publicity posters for the popular Swiss resort, with its gentle ski hills and famous chalets. These wooden houses are beautifully embellished with carvings and hand-painted decorations. Even the railway station where I arrive is maintained in chalet style. 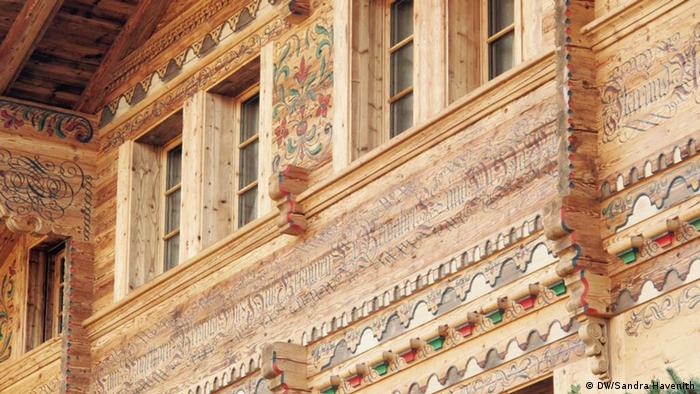 In the middle of the village stands Gottfried von Siebenthal's house. For years he ran the Cookshop, a specialty housewares store in Gstaad. On the wall, a framed autograph from Audrey Hepburn, who went shopping there. "Originally Gstaad was very poor. People earned their living from cheese and cattle," declares von Siebenthal, who enjoys talking about his beloved mountain village on his guided tours. "But when the Palace Hotel opened in 1913, luxury came to Gstaad."

Every guest a king and every king a mere guest

To this day jet-setters are flown in by helicopter to stay at the Palace. Grace Kelly was a guest, Marlene Dietrich once sang at the hotel and Madonna danced there. Michael Jackson even wanted to buy it. At the entrance, a Bernese Mountain Dog welcomes me. 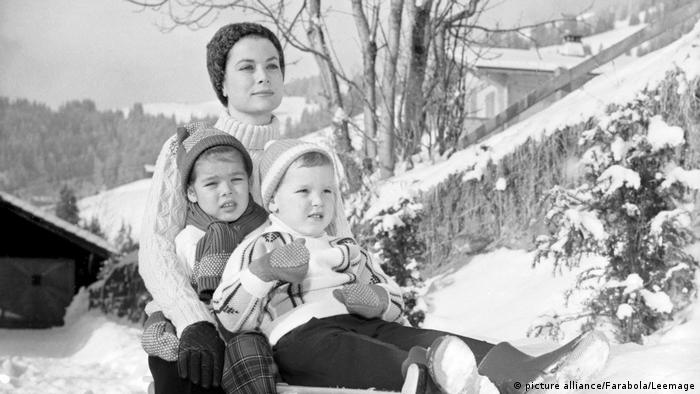 Black limousines stand in front of the building. "Right now Queen Máxima of the Netherlands and her husband are sitting in the hotel lobby," hotel managing director Andrea Scherz tells me. He leads me through the glamorous Palace, which his grandfather and father ran before him. When he was a child, Andrea Scherz himself played with trains with Roger Moore in the hotel.

A golden elevator takes us up to the hotel suite. Unlike what I'd expected, it's cozy, with a great deal of wood in the decor: an alpine atmosphere that the rich and famous also love. They like to come to Gstaad, which, with its combination of tradition and stylishness, easily holds its own against the competition from Davos and St. Moritz. 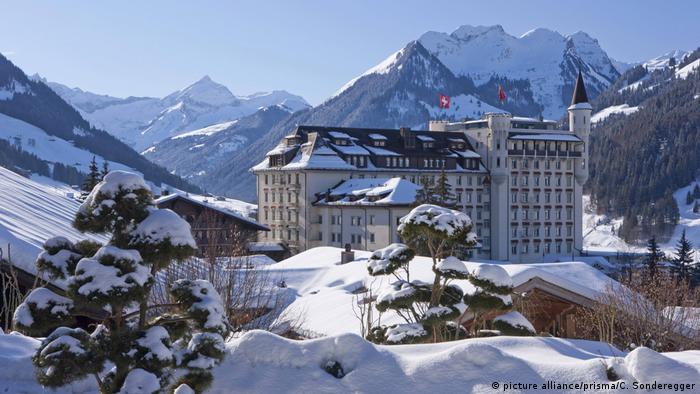 The locals say self-confidently and with their own distinctive charm, "People go to St. Moritz to be seen, and to Gstaad to enjoy themselves."

The amount of sport on offer in Gstaad is huge: downhill skiing, tobogganing, heli-skiing. Or how about skijoring — barreling through the snow at 70 kilometers an hour behind a horse? This equestrian sport comes from Scandinavia and has a long tradition in Gstaad. As early as the 1950s, Palace guests enjoyed being towed on skis by a horse. 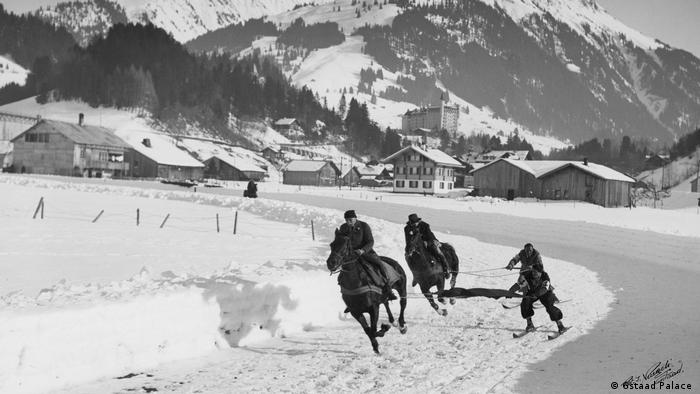 Greetings from Gstad: "Skijoring" in the 1950s

With my fear of horses, I decide instead on a fat bike, a bicycle with tires more than 12 centimeters in breadth, with which you can cycle through snow.

The thing about snow

The snow is very soft today — bad conditions for fat biking. So I dismount several times, even though my ski instructor Claude Frautschi assures me even if I fall down, the landing will be soft, which makes the risk of injury slight.

Originally, the fat bike was developed to make it easier to ride on sand, and while sand and snow have similar consistencies, people came up with the idea of offering fat biking as a winter sport. This sport is one of those Gstaad has on offer for days when there's little snow. 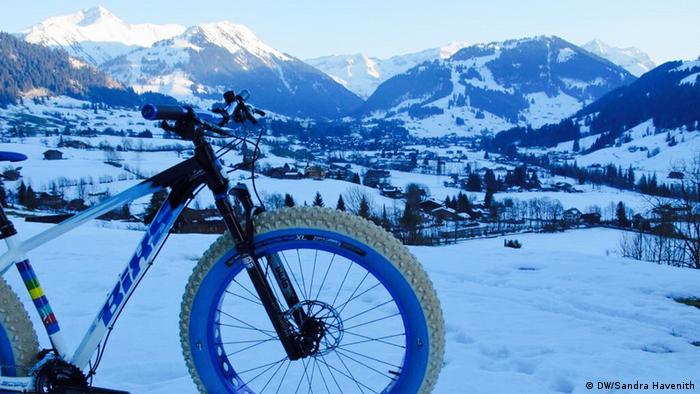 With or without snow, fatbikes are the new trend

Once again this winter is a challenge for the small mountain village in the Bernese Highlands. There are many gray-green surfaces. The village is only 1,000 meters above sea level. That's another reason fat biking is a good option, because it can be done without snow, which now often has to be produced artificially by snow cannons — "the best in the world," as tourism director Sébastien Epiney emphasizes.

The many slopes to the north have suddenly become Gstaad's hope for the future. "Preferably a little less sun, but more snow," according to Epiney. It's a credo the Palace Hotel is glad to endorse, because sales of champagne and caviar also drop. Less snow means fewer guests. That worries managing director Andreas Scherz, because although the Palace, with its gorgeous terrace and breathtaking views of the Alps, successfully attracts guests in the summer, two thirds of its turnover is in the winter. 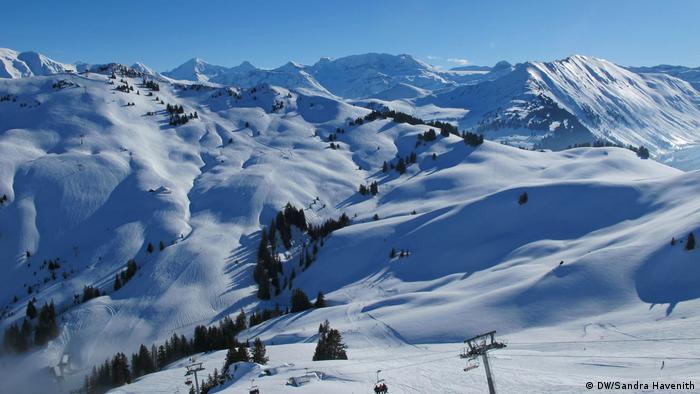 Starry skies instead of hotel stars

The igloo village, high above Gstaad at 2,000 meters, also had to open later last year because it was too warm. Today there's no sign of that. All around me are snow-covered mountains and sunshine — a perfect day. In the midst of it all is the igloo village, which lies in the wintry landscape like a humpback whale. Inside, I find it quite cool, but ice sculptures glitter everywhere: dragonflies and hummingbirds, parrots and palm trees.

On the beds are expedition sleeping bags that keep you warm at temperatures as low as minus 40 degrees Celsius, and on the walls, hangers for ski clothing, without which it would definitely be too cold in the fairy-tale palace on the ice. Here you have the mountains all to yourself at night after everyone else has gone back down to the valley and its cozy chalets. 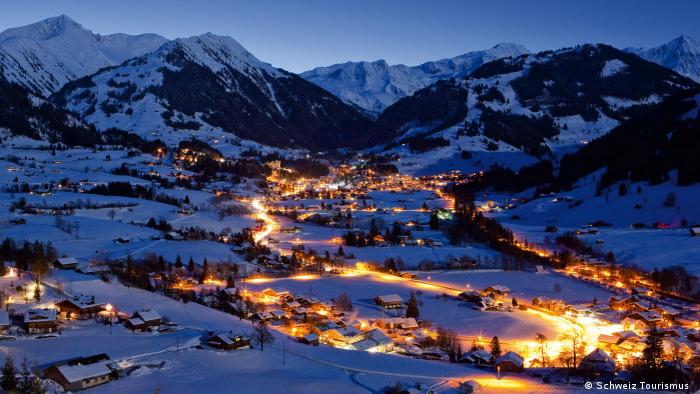 When in the evening the small string lights that decorate the wooden houses down in the village are turned on, everything glows with the Alpine romanticism, idyllic atmosphere and serenity that all the people here have told me about — the villagers who so love Gstaad and who make the most luxurious rustic village in Switzerland so special.