Greenpeace has recreated a massive copper copy of Leonardo da Vinci's 'Vitruvian Man' in the Arctic, to draw attention to the rapid loss of ice. Summer measurements are due out this month. Scientists fear a record low. 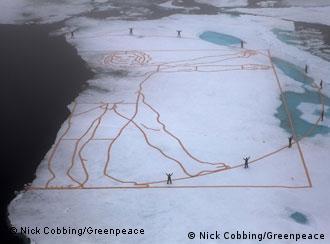 A Greenpeace stunt in the Arctic has recreated one of da Vinci's most famous drawings using long stretches of copper in a bid to draw attention to this month's upcoming measurements of the state of Arctic ice cover.

Summer levels of sea ice in the Arctic have dropped precipitously since measurements began in the 1970s, and observers are waiting to see if this year's measurements drop below the record low set in 2007.

Scientists sailing on the Greenpeace ice breaker Arctic Sunrise between the Norwegian island Svalbard and the North Pole drilled into Arctic ice in an effort to understand why it's melting so fast.

Warning of an ice-free Arctic in summer as early as 2020, experts said decreasing ice levels could become a self-perpetuating cycle.

A yet-to-be published study calculated that the total volume of Arctic sea ice fell to a record low in 2010, suggesting that thinning has continued despite a rather steadier ice extent over the past three or four years, Reuters reported. 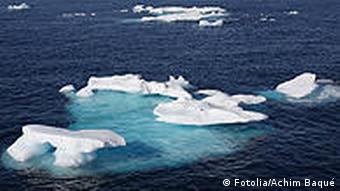 Sea ice levels are normally at their lowest in mid-September.

NSIDC, one of the main scientific institutes studying the scope of Arctic sea ice, confirmed that in 2011 sea ice has retreated to the third smallest area on record and that there has been a decrease in both the thickness and the extent of summer sea ice in the Arctic over the past 30 years driven by a rise in global temperatures.

Calling his work "The Melting Vitruvian Man," two arms and a leg are missing to illustrate the disappearing ice. 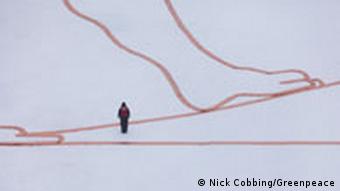 The size of four Olympic-sized swimming pools and constructed 800 kilometers from the North Pole, Greenpeace said the artwork serves as a call for urgent action on climate change.

"We came here to create the 'Melting Vitruvian Man' after da Vinci's famous sketch of the human body, because climate change is literally eating into the body of our civilization," Quigley said in a statement.

Assisted by volunteers from the Arctic Sunrise, Quigley used copper strips to build the giant copy of da Vinci’s 500-year-old drawing. All materials were removed after construction and the copper will be reused, Greenpeace said.

Greenpeace expedition leader Frida Bengtsson explained the importance of sea ice saying, "The poles are the regions most sensitive to climate change on Earth, and the Arctic sea ice melt is one of the most visible impacts of climate instability."

Sea ice, unlike the hundreds-of-meters-thick ice sheets over rock in Greenland, floats on the Arctic Ocean. As well as helping to cool the planet, the region serves as a vital habitat for polar bears, walruses and other wildlife.