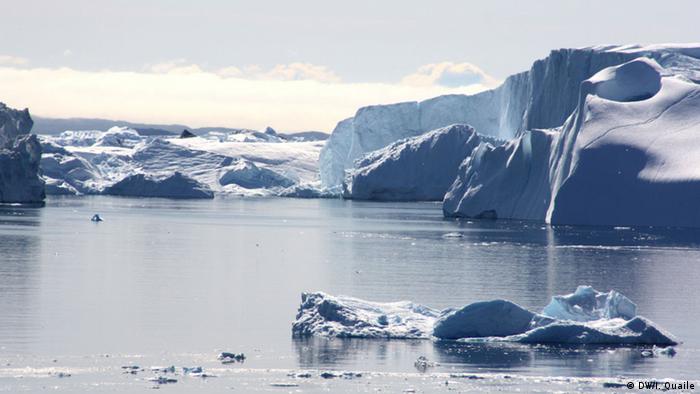 Scientists from the Alfred Wegener Institute (AWI) in Bremerhaven mapping elevation changes of Greenlandic and Antarctic glaciers have found ice sheets are melting at record pace. Per year, the ice sheets dump some 500 cubic kilometers of ice into the oceans. The researchers say that compares to an ice sheet that's 600 meters (1970 feet) thick and covers an area as big as the German city of Hamburg - or the Southeast Asian nation of Singapore.

The research team headed by Veit Helm used around two years' worth of data from the ESA CryoSat-2 satellite to create digital elevation models of Greenland and Antarctica. The results were published in the online magazine of the European Geoscience Union (EGU) "The Cryosphere". 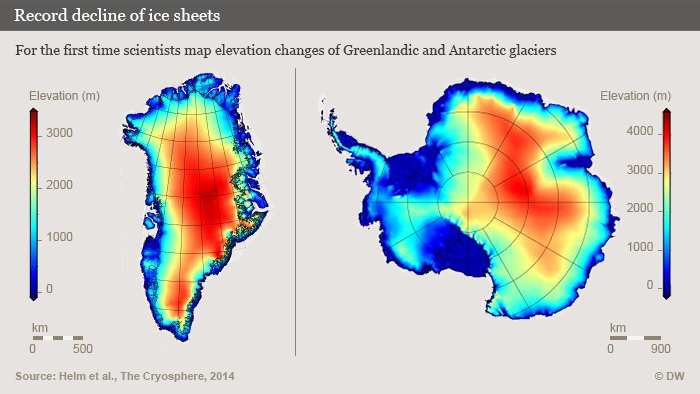 Helm and his team analyzed all data from the CryoSat-2 radar altimeter SIRAL in order to come up with these detailed maps. The satellite with this new radar equipment was launched in 2010. Satellite altimeters measure the height of an ice sheet by sending radar or laser pulses which are then reflected by the surface of the glaciers or surrounding areas of water and recorded by the satellite.

The researchers used other satellite data as well to document how elevation has changed between 2011 and 2014. Ice sheets gain mass through snowfall and lose it through melting and accelerating glaciers, which carry ice from the interior of the ice sheet to the ocean.

"We need to understand where and to which extent the ice thickness across the glaciers has changed. Only then can we analyze the drivers of these changes and find out how much ice sheets contribute to global sea level rise," lead author Helm said.

Rapid ice loss over a short period of time

The team used more than 200 million SIRAL data points for Antarctica and some 14 million data points for Greenland to create the elevation maps. The results show that Greenland alone is losing around 375 cubic kilometers of ice per year.

Compared to data which was collected in 2009, the loss of mass from the Greenland ice sheet has doubled. The rate of ice discharge from the West Antarctic ice sheet tripled during the same period. 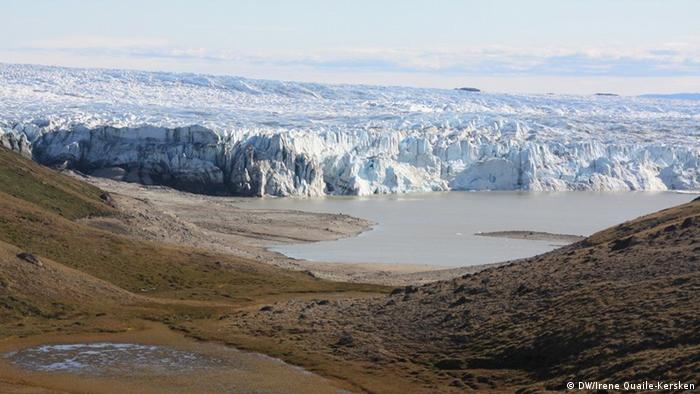 "If you combine the two, they are thinning at a rate of 500 cubic kilometers per year. That is the highest rate observed since altimetry satellite records began about 20 years ago," said glaciologist Angelika Humbert, who co-authored the AWI study.

The researchers detected the biggest elevation changes at the Jakobshavn Glacier in West Greenland and Pine Island Glacier in West Antarctica. This corresponds with other scientific research on both areas.

Whereas the West Antarctic Ice Sheet and the Antarctic Peninsula, on the far west of the continent, are rapidly losing volume, East Antarctica is gaining volume. However, the scientists stress that this is happening at such a low rate that it does not compensate for the losses on the other side of the continent.