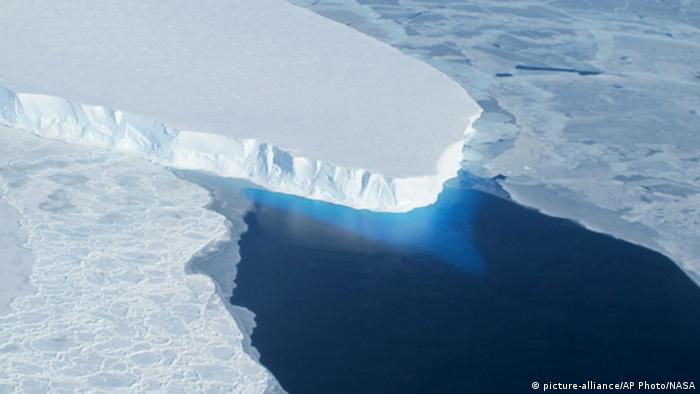 The Thwaites glacier is melting fast, say both teams of scientists

A new NASA study published in "Geophysical Research Letters" and a second study by scientists from the University of Washington each independently come to the conclusion that parts of the West Antarctic ice sheet are already slowly collapsing. They say this could result in a considerable sea level rise within the next century or two. Both research teams, using different methods and looking at different parts of the ice sheet, conclude that the trend is probably unstoppable.

The NASA study uses data from satellites, planes, ships and measurements from the shelf ice to examine six large glaciers in the Amundsen Sea over the last 20 years. The second report, published in the journal "Science," uses computer models to study the Thwaites glacier. It is considered of particular importance because it acts as a type of barrier, holding back the rest of the ice sheet.

The West Antarctic ice sheet contains so much ice that it would raise global sea level by three to four meters if it melted completely. As it sits on bedrock that is below sea level, it is considered particularly vulnerable to warming sea water.

Until now, scientists assumed it would take thousands of years for the ice sheet to collapse completely. The two new studies indicate that could happen much faster - as early as 200 years from now or, at the most, 900.

According to NASA researcher Eric Rignot, the glaciers in the Amundsen Sea sector of West Antarctica have "passed the point of no return." He told journalists this would mean a sea level rise of at least 1.2 meters (3.93 feet) within the next 200 years.

The University of Washington scientists discovered, using topographical maps, computer simulations and airborne radar, that the Thwaites glacier is also in an early stage of collapse. They expect it to disappear within several hundred years. That would raise sea levels by around 60 centimeters (23.62 inches). 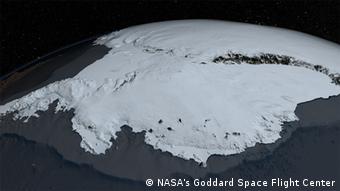 The NASA study showed that sea level rises of 1.2 meters are possible

The good news, according to author Ian Joughlin, is that while the word "collapse" implies a sudden change, the fastest scenario is 200 years, and the longest more than 1,000 years. The bad news, he addds, is that such a collapse may be inevitable.

"Previously, when we saw thinning we didn't necessarily know whether the glacier could slow down later, spontaneously or through some feedback," Joughlin said. "In our model simulations it looks like all the feedbacks tend to point toward it actually accelerating over time. There's no real stabilizing meachanism we can see."

The University of Washington scientist says the thinning of the ice in recent decades is most likely related to climate change. More emissions would lead to more melting and faster collapse, but "other factors make it hard to predict just how much time we could buy under different scenarios."

IPCC report out of date

The latest IPCC report does not adequately factor ice loss from the West Antarctic ice sheet into its projections for global sea level rise, on account of a lack of data. These "will almost certainly be revised upwards," according to Sridar Anandakrishnan from Pennsylvania State University at the presentation of the University of Washington study. The scientist was not involved in the research.

"IPCC numbers are, by their very nature, on the conservative side," he said. He believes the predictions will have to be increased to up to 90 centimeters of sea level rise by 2100.

NASA glaciologist Rignot said he was also taken aback by the speed of the changes.

"We feel this is at the point where ... the system is in a sort of chain reaction that is unstoppable," he said.

"This system, whether Greenland or Antarctica, is changing on a faster time scale than we anticipated. We are discovering that every day," he said. Rignot added that even drastic measures to cut greenhouse gas emissions could not prevent the collapse, in his opinion.

The Pine Island Glacier in the Antarctic hit the headlines last year when a giant iceberg broke off it. Now scientists have found the glacier is melting irreversibly - with dramatic consequences for global sea levels. (16.01.2014)