Is Antarctica really safe from climate change? A new study suggests even the icy east of the frozen continent could be at risk, with consequences for global sea levels. Scientists say the changes could be irreversible. 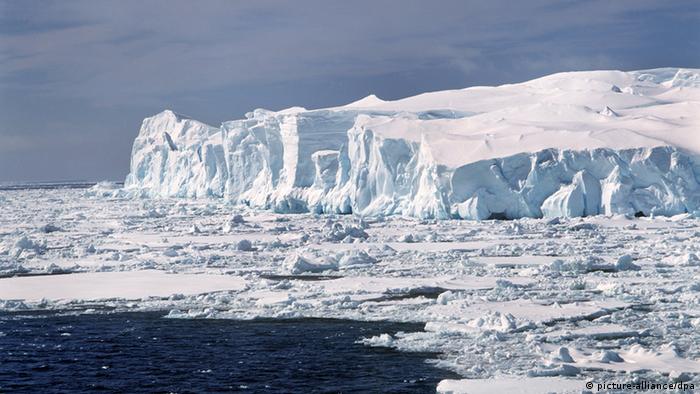 While the Arctic is melting twice as fast as the rest of the planet, the icy regions around the south pole were long considered immune to climate change. But melting glaciers on the Antarctic Peninsula in recent years sparked doubts in the scientific community about just how stable the western region of Antarctica really is.

Only the huge icy vastness of Eastern Antarctica still appeared to be safe from the perils of a warming climate. Now, experts from Germany's Potsdam Institute for Climate Impact Research (PIK) have published findings indicating that this too might no longer be the case.

In a study published in "Nature Climate Change," the scientists write that the melting of just a small volume of ice on the East Antarctic coast could ultimately trigger a discharge of ice into the ocean which would result in an unstoppable sea-level rise.

"Previously, only the West Antarctic was thought to be unstable. Now we know that the eastern region, which is ten times bigger, could also be at risk," says Anders Levermann, co-author of the study and one of the lead authors of the sea-level section in the most recent Intergovernmental Panel on Climate Change (IPCC) report. 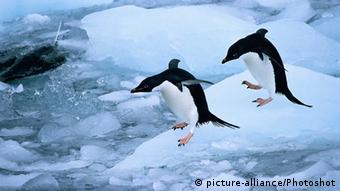 Adelie penguins are a common sight along the coasts of Antarctica - but for how long?

The PIK findings are based on computer simulations which make use of new, improved data from the ground beneath the ice sheet.

"The Wilkes Basin in East Antarctica is like a bottle that is tilted," says Matthias Mengel, lead author of the new study. "If you take out the cork, the contents will spill out."

At the moment, the 'cork' is formed by a rim of ice at the coast. If that were to melt, the huge quantities of ice it holds back could shift and flow into the ocean, raising sea levels by three to four meters. Although air temperatures over Antarctica are still very low, warmer ocean currents could cause the ice along the coast to melt.

So far, there are no signs of warmer water of this sort heading for the Wilkes Basin. Some simulations suggest though that the conditions necessary for the cork to melt could arise within the next 200 years. Even then, the scientists say it would take around 2000 years for sea level to rise by one meter.

A long, but irreversible, process

According to the simulations, it would take 5,000 to 10,000 years for all the ice in the affected region to melt completely. "But once this has started, the discharge will continue non-stop until the whole basin is empty," says Mengel.

"This is the basic problem here. By continuing to emit more and more greenhouse gases, we could well be triggering reactions today that we will not be able to stop in the future."

The IPCC report already predicts a global sea-level rise of up to 16 centimeters this century. As this could already have devastating impacts on many coastal areas around the globe, any additional factor is of key importance to the calculations.

"We have presumably overestimated the stability of East Antarctica," says Levermann. Even the slightest further increase in sea level could aggravate flooding risks for coastal cities like New York, Tokyo or Mumbai.

At the moment, the largest contribution to Antarctic ice loss and rising sea levels comes from the Pine-Island glacier in West Antarctica. A huge iceberg, which broke off from the glacier last year, is currently floating into the open waters of the Southern Ocean.

French glaciologist Gael Durand from Grenoble University told DW in January of this year that the huge glacier had already reached a point where its continued melting is irreversible, regardless of air temperature or ocean conditions.