Greeks in bank run as deal with creditors uncertain | Business | Economy and finance news from a German perspective | DW | 17.02.2017

Greeks in bank run as deal with creditors uncertain

Greeks have withdrawn large amounts of money from their bank accounts in recent weeks amid growing uncertainty as to whether Athens is able to strike a deal with creditors over the terms of the current bailout program. 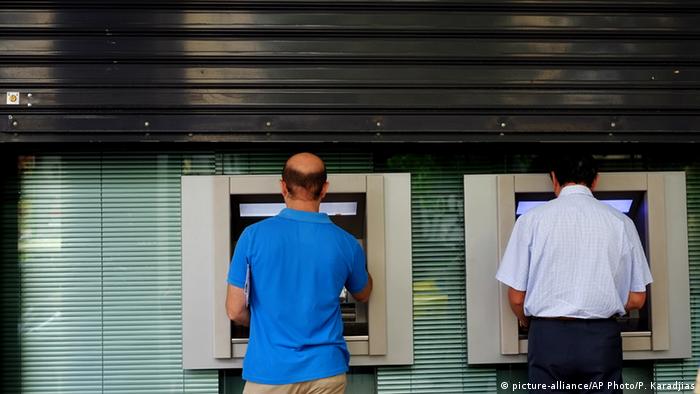 Greek citizens had withdrawn close to 3 billion euros ($3.2 billion) since the beginning of the year, the Union of Greek Banks reported Friday.

The English-language news blog "keeptalkinggreece" spoke of a new bank run limited only by the capital controls currently in place. It noted that delays in the talks between Greece and its lenders had brought back the ghost of Grexit," referring to the southern European nation's possible exit from the eurozone.

The website said 2.5 billion euros had been withdrawn from private bank accounts over the past 45 days alone, "and this despite capital controls that allow Greeks to withdraw a maximum of just 1,800 euros per month.

The government in Athens has been trying to allay fears of a Grexit, saying earlier this week that it intended to reach a political agreement in principle with its creditors on Monday in order to unblock loans required by the cash-strapped country to repay its debts.

Eurozone finance ministers are to meet in Brussels Monday to discuss the deadlock with hopes that the different sides can at least achieve an outline of how to reach agreement on the terms of the latest review of Greece's 86-billion-euro bailout.

Eurozone officials have demanded that Athens deliver a primary balance - or budget surplus before debt repayments - of 3.5 percent of gross domestic product, while the International Monetary Fund (IMF) has insisted only 1.5 percent of GDP is feasible.

The Greek government has made it abundantly clear that it's not willing to expand current austerity measures by further tax hikes or pension cuts.