Members of Greek Prime Minister Alexis Tsipras' government have been holding talks before putting a raft of economic reforms to parliament. Lawmakers need to approve the measures for Greece to receive a third bailout. 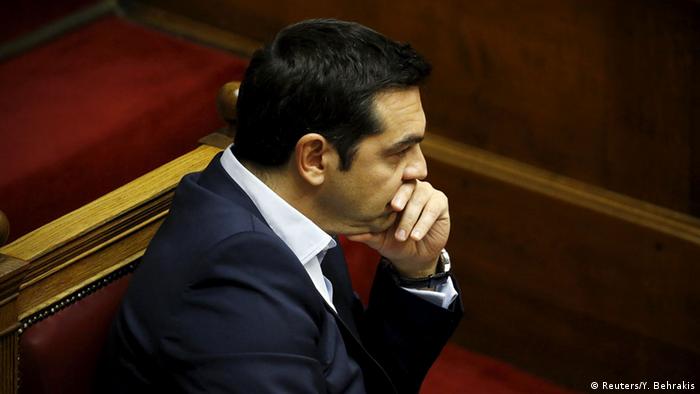 Prime Minister Tsipras met with members of his left-wing Syriza party behind closed doors on Tuesday, in a bid to convince them to back a fresh package of austerity measures in return for a new economic bailout from the institutions formerly known as the troika - the European Commission, the European Central Bank, and the International Monetary Fund.

The prime minister could be facing revolt from several members of Syriza, which swept to power in snap elections in January by promising not just to refrain from passing new austerity measures, but to roll back those introduced by previous governments.

In a last-ditch deal reached on Monday morning, Tsipras pledged to get economic reforms demanded by Greece's creditors through parliament by the end of Wednesday, so that negotiations on a bailout worth as much as 85 billion euros ($95 billion) can begin.

The legislation is expected to pass, as the opposition conservative New Democracy party, the pro-European To Potami, and the PASOK Socialists have all said they would support it.

However, a significant number of the 149 Syriza lawmakers in parliament could vote against the agreement, with many publicly expressing their opposition.

"The deal ... is unacceptable and does not deserve to be charged to a radical political party such as Syriza, and a battling government that promised to abolish ... austerity," he said in a statement published on his ministry's website. Germany, he charged, had treated Greece "as if it was their colony and [behaved] as brutal blackmailers and 'financial assassins.'"

There has been speculation in the Greek media that as many as 40 of Syriza's 149 members of parliament could vote against the legislation.

Support also was not assured from the 13 members of parliament from Syriza's right wing allies the Independent Greeks.

Their leader, Defense Minister Panos Kammenos said his party would support the government, but he also said that it would not approve measures that hadn't been agreed in Athens prior to Sunday's emergency eurozone summit. He also described Monday's deal as a "coup in the heart of Europe."

"They want the government to fall and to replace it with one that hasn't been voted on by the Greek people," he said.

So while Tsipras appears set to get the legislation through parliament, the future of his anti-austerity government is far from clear. There has even speculation, including by Germany's mass-circulation daily "Bild" that after getting the bailout deal ratified, Tsipras could be forced to step down.

Days after Greece struck a landmark deal with creditors to enter bailout negotiations, both sides are struggling to come up with a solution to its pressing, short-term cash needs. Options are proving elusive. (14.07.2015)

The Eurogroup has reappointed Jeroen Dijsselbleom as its leader. The Dutch finance minister's second term promises to be challenging, as the eurozone looks for the most viable ways to keep Greece in the currency union. (13.07.2015)

Greeks begin the new week weary after following a crucial nighttime meeting to decide Greece's fate in the eurozone. Many are relieved to see the threat of a "Grexit" reduced, but remain anxious, says DW's Nick Barnet. (13.07.2015)