Greek island accused of abusing its star attraction: donkeys | Europe | News and current affairs from around the continent | DW | 08.07.2019

Donkeys may be used to carrying heavy loads. However on the island of Santorini they're being abused by local handlers and tourists. Animal rights activists want to save the endangered species. 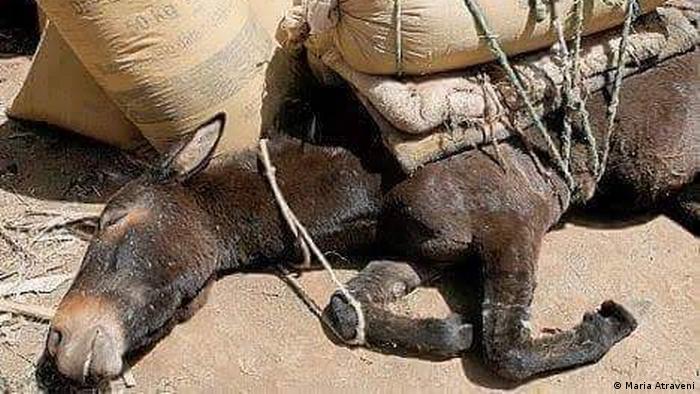 With its picturesque cobblestone alleys, whitewashed villages and stunning sunsets, Santorini has long been revered as Greece's most iconic and photogenic island.

But the tranquil tourist haven in the southeast Aegean Sea, has been turned into a battleground by activists bent on stopping the abuse of Santorinis' star, albeit most endangered species: donkeys.

In a chilling video and damning report, PETA, an animal rights group, has accused Greek authorities of covering up what it calls the "cruel" treatment of donkeys on the popular island.

It also criticizes officials for allegedly blocking its campaign on buses and taxis depicting an exhausted donkey next to the words "Donkeys Suffer for Tourists. Please Don't Ride Them."

The accusations come about a year after the government, faced with a fresh bout of violent protests and international criticism, decreed urgent measures, including a ban on heavy cargoes carried by donkeys, to protect the endangered species from abuse.

But since then, says Maria Astraveni of the animal rights group Direct Action Everywhere, "zip, zilch, zero has changed." Like other activists, Astraveni openly accuses local authorities of turning a blind eye to the plight of the donkeys, suggesting that they are instead supporting the lucrative business of donkey rides.

Scores of campaigns have struggled to save Santorini's donkeys for years. But all to no avail, forcing activists like PETA and Astraveni to ratchet up pressure, protests and a more offensive campaign including taking criminal action against local authorities. 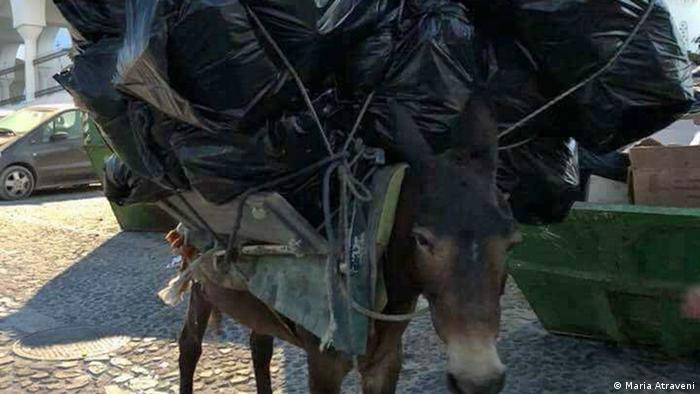 "The donkeys," said Astraveni, "have to be liberated, because if they aren't they face certain extinction."

While once key to agriculture and transportation here, donkeys have largely perished in Greece's thrust to embrace modernity in recent decades. Their population has plummeted by just over 96% in the last half century, dropping from 508,000 in 1955 to around 12,000 in 2015, according to Athens University data.

Of them, about 2,000 remain on Santorini, making it one of the largest donkey communities in country.

Read more: Should animals be given more rights? The documentary 'Citizen Animal' tries to answer

Decorated with bright colored beads and jingling bells, the donkeys haul hundreds of holidaymakers up a steep and torturous path of some 520 steps each day, offering them a so-called authentic Greek experience for the €6 ($7) harbor-to-capital ride.

Forced by their handlers to press on for up to 20 hours daily, donkeys are routinely beaten to lug cargoes and tourists while kept deprived of water, shade and adequate rest, activists say.

"Put your hand under their girths and saddles and they are full of open wounds, said Astraveni. "Their bridles and mouth pieces are drenched in blood at times. And when they break down and collapse, unable to continue, their owners just discard them like some tool. They let them die, replacing them with another younger one or a mule." 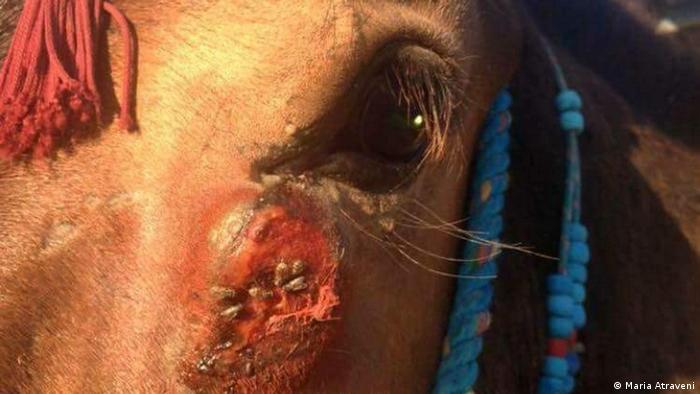 Some 40,000 tourists, many of whom German nationals, are ferried from luxury liners to the island's harbor at the foot of the steep climb each week.

Heightened action by activists in Santorini mark the latest example of how animal rights are on the march worldwide, moving further into the mainstream.

"The timing is right," says Astraveni. "People are so much more sensitive now to animal rights and to the bigger drive to liberate animals."

The key to busting Santorini's brutal donkey tradition, she says, "is to first get the tourists to stop feeding [the trade]."

In 2015 and in the wake of a nationwide spike in animal abuse, Greece upgraded the offence to a crime, slapping offenders with steep fines of up to €15,000 euros ($17,000) and five years imprisonment.

Under the new measures enforced last years, handlers are required to keep donkeys in proper stalls, allow them to exercise at least 30 minutes a day and limit their work in scorching temperatures. They are also barred from loading the creatures with cargoes of over 100 kilograms (220 pounds) or more than a fifth of the animal's weight.

Still, activists insists the abuse continues with no handler penalized since the latest measures went into effect last August. 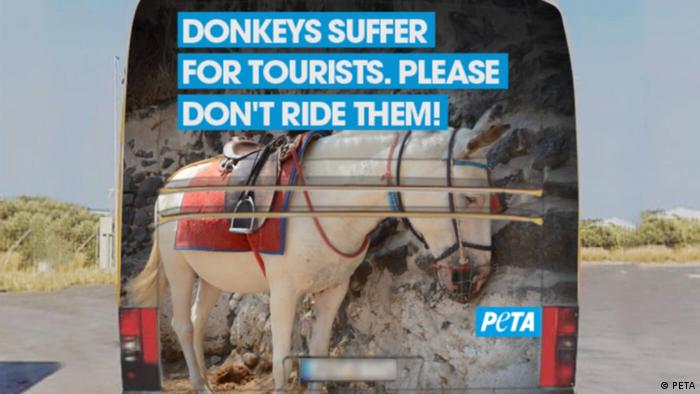 Repeated attempts by DW to contact local authorities went unheeded. However in response to PETA's report, Santorini Mayor Nikos Zorzos issued a statement saying that authorities were abiding by Greek law which protects the animals. He said "several organizations" had inspected the island and deemed that they were in good health. "We care about their well-being," he said, adding that the municipality had no jurisdiction over ad campaigns on buses or taxis in order to intervene on PETA's behalf.