Greece′s middle class feels the pain | Europe| News and current affairs from around the continent | DW | 23.01.2013

Shops in Greece are folding by the day. Many Greeks are unemployed, while others work for half the pay and those who can, leave the country. The economic crisis is draining its middle class financially. 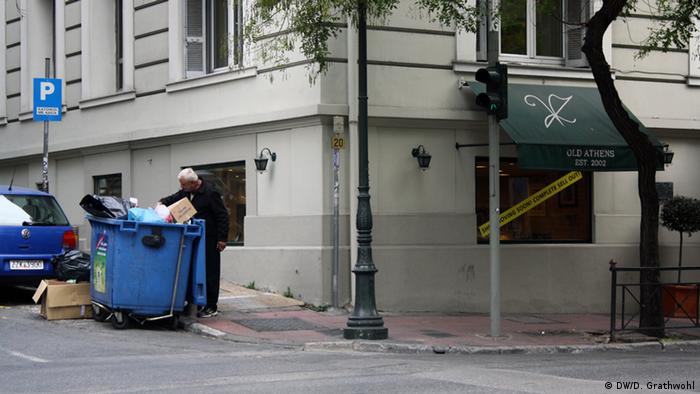 Theodoros Marinidis doesn't have much time. Busy planning his daughter's future, he has scheduled an appointment at the Goethe Institute in Athens.

The plan is for her to go to Germany after she graduates from university. Although she already speaks German, her father believes she could benefit from further instruction and practice.

Marinidis sees his daughter's future outside Greece because he considers the country's future to be totally unpredictable. " To a certain degree, we've also made plans here, maybe not the same as the Germans, but now everything has become incalculable," he says. No one, he argues, can say with any certainty whether Greece will remain in the eurozone and what its political future has in store. 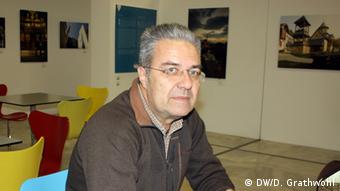 Marinidis knows Germany. The 56-year-old ophthalmologist spent a part of his residency in Regensburg. He now works as an eye doctor in the Greek public sector, which has been hit particularly hard by government cutbacks.

Greek's notorious tradition of favoritism has massively inflated the public sector. For decades, politicians have given jobs to many of their loyal followers to win votes in return. The many superfluous positions and the excessive salaries that resulted from such favoritism are now on the chopping board.

But the cuts are affecting not only politicians' buddies but everyone - and very hard, according to Marinidis. "Wages in the public sector, where both my wife and I work, have been reduced by a third," he says. "That's a lot, considering that living costs haven't dropped."

One in four Greeks is currently unemployed and every second young person is on the dole, according to the country's statistics office ELSTAT. 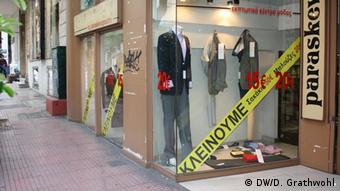 Shops are closing by the day

Christos aims to avoid the fate of the unemployed. He's currently studying civil engineering with plans to complete his PhD. in Germany. He will need to leave his family behind, even though his father is suffering from cancer.

His father's treatment, however, is taken care of, according to Christos. "If we as a family had not kept our finances in order, my father's treatment would not have been affordable," he says. Many medications in Greece are now only obtainable for cash because the health insurance companies are unable to pay for them. Nor is adequate insurance available to replace the practice of doctors in hospitals receiving an envelop with money to see patients.

Unemployment and wage cuts have crippled a second major source of money for numerous Greeks - rental income. Many apartment renters are unemployed and can no longer pay their rent. 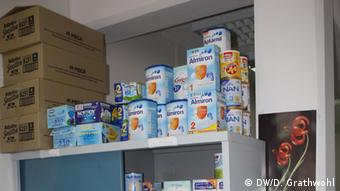 Many Greeks are stocking up on staples - just in case

Revenue from commercial rental properties has also plummeted as shops close their doors for lack of business. Owners have to deal not only with a significant drop in rental income but also with property taxes. These taxes, while commonplace in most other European countries, are relatively new in Greece and yet another cost for financially squeezed property owners to manage.

Indeed, rising taxes and declining revenues have become a tremendous burden for many Greeks, according to Ulrike Drissner, deputy director of the Goethe Institute in Athens, who has followed Greek's social, political and economic development since the 1970s. "A gardener recently told me he has no idea what to do," she says. "He has to support two kids who are still studying."

Drissner sees shops closing everyday and supermarket prices rising instead of falling. "You really have to wonder how people can even afford to eat," she says.

Many food prices in Greece are, indeed, higher than in Germany. On top of that, many Greek products cost more than imports. Alpine milk, for instance, costs about a third less than Greek milk, caused by local milk producers that have formed a cartel to drive prices up. 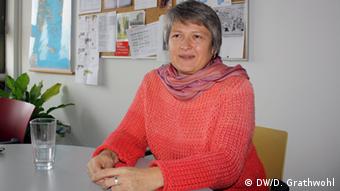 People groan about the austerity measures even though corruption and nepotism remain widespread. So they're looking everywhere to save money. The needy are allotted plots in urban vegetable gardens to grow their own produce. All the newspapers are full of "do-it-yourself" instructions, whether it's preserving fruit or repairing the old kitchen. Socially-minded clinics care for the ill and collect baby food for the poor.

Firewood is for sale along roads. "When heating costs soared by 40 percent last winter, the air in Athens smelled of burning wood for the first time in decades," says Drissner. People with fireplaces, she adds, have fired them up and those without them have bought medal stoves, called "stobas," put them in a room and drilled a hole in the wall for the chimney pipe to heat at least one area. Even residents of upscale neighborhoods have turned down their furnaces to save costs, Drissner included.

Waiting in the foyer of the Goethe Institute for an appointment to prepare for his daughter's future, Theodoros Marinidis admits something himself: "If I were five years younger," he says," I would go to Germany, honestly."

Athens lawmakers have voted to investigate ex-finance minister George Papaconstantinou over allegations he hampered a tax probe. It is alleged the socialist politician removed relatives from a tax-evasion suspect list. (18.01.2013)

Greece has given the green light to an unpopular package of tax reforms, in order to meet requirements of international creditors. Opponents say the changes will bite the less well off, without scratching the wealthy. (12.01.2013)

The crisis in the EU's southern periphery led to a spike in the number of Spaniards and Greeks seeking jobs in Germany last year. But the influx has been no problem for the labor market, according to German authorities. (03.01.2013)