Athens lawmakers have voted to investigate ex-finance minister George Papaconstantinou over allegations he hampered a tax probe. It is alleged the socialist politician removed relatives from a tax-evasion suspect list. 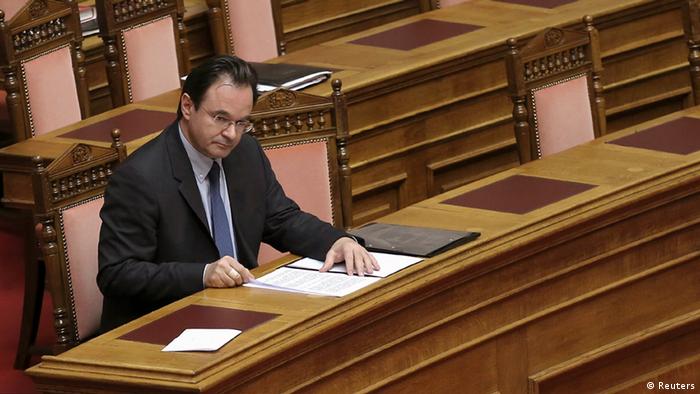 The Greek parliament voted in the early hours of Friday after a lengthy debate that also scrutinized the behaviour of three other senior politicians.

In the vote, 265 out of 294 members of parliament voted in favour of the motion to set up a committee to investigate Papaconstantinou's role in the alleged cover-up. Six voted against the probe.

The allegations center on a list - dubbed the Lagarde List - of more than 2,000 Greeks holding deposit accounts with a Geneva branch of the bank HSBC.

International Monetary Fund chief Christine Lagarde sent the list to Papaconstantinou in 2010 while she was still the French finance minister. However, Greek authorities failed to investigate the persons named and it is alleged that Papaconstantinou deleted the names of three family members.

During the debate, Papaconstantinou insisted he was the target of a witch hunt. "It is obvious that some people want me to be the scapegoat," said the former minister.

How could suspected Greek tax evaders data simply disappear? This question may soon come before a parliamentary probe. At the center of the scandal is the country's former finance minister. (13.01.2013)

"I did not alter anything. I had no reason to do so," he went on. "My relatives have provided evidence that the sums concerned are legal and have already been taxed."

The radical leftist party Syriza, which is now Greece's main opposition party, also called for an investigation of Papaconstantinou's successor in the finance ministry, Evangelos Venizelos.

That motion was defeated, along with demands by two smaller parties for probes to be directed at ex-prime ministers George Papandreou and Lucas Papademos.

During the debate, Syriza leader Alexis Tsipras accused the ruling coalition of protecting its own interests. The coalition is led by the conservative New Democracy party, with Papaconstantinou's center-left PASOK as junior partner.

"Just like the Mafia, you abandon the weakest link to the dogs to cover up the case," said Tsipras.

Tax evasion has often been cited as a key reason for Greece succumbing to a crippling financial debt. There was public outrage in September, when the failure to investigate the list was made public.

As a result of Greece's economic woes, salaries and pensions for ordinary workers have been successively slashed, while their taxes have increased.