The public face of Greece's far-right Golden Dawn party has been jailed pending trial as part of an ongoing investigation into the party for alleged criminal activities. 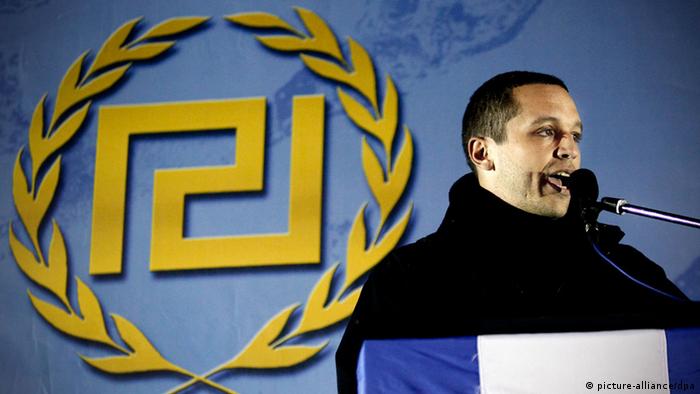 Golden Dawn is Greece's third most popular party but has been on the back foot due to a government crackdown, which has landed its leader and senior lawmakers in jail awaiting trial.

He was remanded on charges of illegal weapons possession with the intent to supply a criminal organization. Kasidiaris denied the accusations.

"For two hunting rifles I am being accused of supplying arms to a criminal organization," Kasidiaris said at the courthouse before the ruling. "This accusation is ridiculous and my persecution is clearly political."

Kasidiaris has been the party's main public figure since leader Nikolaos Mihaloliakos was arrested last year.

The party is accused of being a neo-Nazi criminal gang that attacks immigrants and leftist opponents - accusations it denies. It says it is the victim of a political witch hunt.

Kasidiaris is the ninth of the party's 17 lawmakers to be held in the maximum-security Korydallos prison while awaiting trial on charges of operating a criminal organization.

The crackdown began last September, when a party supporter stabbed an anti-fascist rapper. One of the party's supporters has been charged with voluntary manslaughter for the killing, but the party's leadership has denied any connection.

The party has become the country's third most popular, winning 9.4 per cent of the vote in recent European Parliament and local elections.

Golden Dawn, whose emblem resembles the Nazi swastika and whose members express admiration for Adolf Hitler, has capitalized on fears of illegal immigration and anger over a long recession and high unemployment. Prosecutors expect a trial against Golden Dawn to take place in early 2015.