As elections approach in Greece, politicians argue that immigrants are behind higher crime rates and public health problems. But rights groups say the campaign rhetoric is a cheap ploy to win votes. 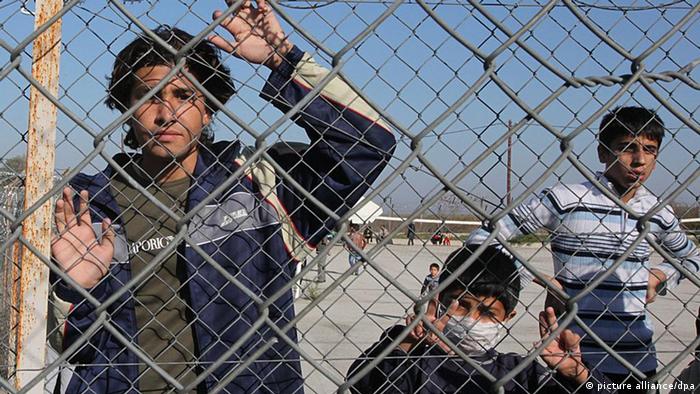 The so-called Integration Law, proposed by Minister for Citizen Protection Michalis Chrisohoidis, raised a furor by calling for illegal immigrants to be held in former military bases until deportation.

Chrisochoidis, a member of the Panhellenic Socialist Movement party, was opposed to the plan as a member of the opposition in 2009, but he has now won the approval of the Greek parliament.

He called for 30 facilities to hold refugees, which would officially be called "closed hospitality centers," and suggested using 250 million euros ($328 million) of EU funding for border protection to build the centers.

"Whoever [illegally] enters the country will be given hospitality and will be immediately asked to return home," Chrisohoidis said at a news conference at the end of March. "Unless they are refugees ... in which case they have a sacred right to asylum."

According to officials, some 100,000 people were arrested for illegal entry or residence in Greece in 2011 and authorities are processing about 30,000 asylum requests.

Opposition parties and human rights organizations have criticized the plan and compared the proposed facilities to prisons. Mohammadi Yunus, director of an Afghan community group in Athens and member of an umbrella group of Greek refugee organizations, dismissed the plan as an old campaign ploy. 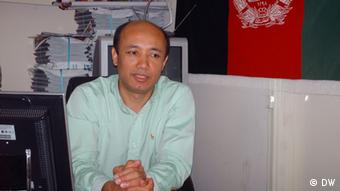 Yunus said Greece has solid asylum laws, it just needs to enforce them

"I have lived in Greece since 2001, and every time elections get underway the complaint about immigrants start," Yunus said.

While he said immigration is an important topic in Greece, he added that applying current laws would bring better results than raids and arrests. "Greek asylum laws are among the best in Europe, but they do not get used," he said.

The Greek bureacracy can sometimes take as long as five years to decide on an application for asylum.

With an early general election likely to be set for May 6, various campaigns have blamed immigrants for an increase in crime.

Three right-wing parties, polling at about 5 percent and with good chances of winning parliamentary seats, have raised the loudest anti-immigrant voices. A party needs at least three percent of the vote to enter Greek parliament.

As part of its campaign, the neo-Nazi party Chryssi Avgi (Golden Dawn) has offered to accompany the elderly on grocery shopping trips if they feel threatened. 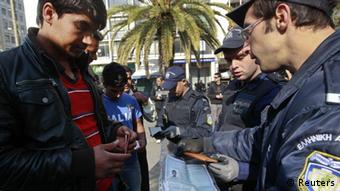 Police have detained hundreds of people in recent weeks

Yunus said crime in Athens has increased but thinks immigrants are not responsible.

"It's true, there is a huge safety problem in the city, but it's immigrants who suffer the most from it," he said, adding that in some neighborhoods immigrants are afraid to go outside after dark. "People are upset that the state is not interested in the problems and immigrants end up being the scapegoats."

Poverty, not immigrants, behind crime rise

Health Minister Andreas Loverdos, one of Greece's more popular politicians, also blamed immigrants for health issues across the country and in a recent television interview described immigrants as a "health time bomb." He also said immigrants spread contagious diseases like tuberculosis and HIV. 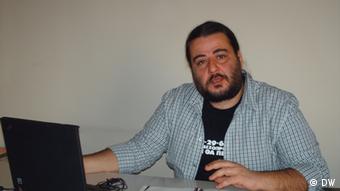 Other authorities warned that some immigrants come from regions where tuberculosis and cholera are on the rise.

Tassos Koronakis, a migration expert for the left-wing opposition party Syriza, said government policies were behind Greece's difficulties with immigration.

"When the economy was going well, the government let immigrants without valid papers enter the country to exploit them as cheap labor," Koronakis said. "Today, they want to get rid of these people, so they talk about detention centers and health time bombs."

Koronakis added that poverty, not immigrants, was the real cause of increased crime. "Criminal schemes are generally controlled by Greeks who stay in the background," he said.

Despite making the first calls for immigrant detention centers years ago, Conservative Greek politicians have been absent in the immigration debate.

It seems that many conservatives are stifling their opinions for fear of criticism from the EU, since the country was unable to control its own borders, which happen to also be the borders of the EU. 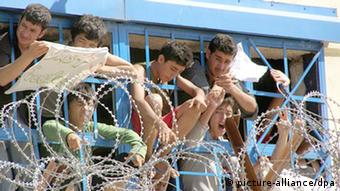 "As the European Parliament's rapporteur for reforms to the Schengen zone, I could not help but notice that our partners want one thing: that the people who call for help are willing and able to help themselves," conservative Greek EU parliamentarian Giorgos Papanikolaou said.

Greece needs to put together an immigration policy that keeps close guard over the border, remains open to asylum seekers and deports illegal immigrants while integrating the people already in the country, Papanikolaou said.

"That plan has to include that the burdens that accompany dealing with refugees are spread more fairly across Europe," Papanikolaou said.

Currently, each EU country is responsible for addressing - and paying for - its own asylum applications. But Greek politicians think they need additional EU help as their country serves as the main gateway to the 27-member bloc.

In the run-up to the April election, President Nicolas Sarkozy has threatened to pull France out of Europe’s border-free Schengen area, putting passport-free travel in Europe at risk. (14.03.2012)