Greece's government is set to pass controversial pension cuts on Sunday. Retirees are livid, and unions are on strike, Jannis Papadimitriou reports from Athens. 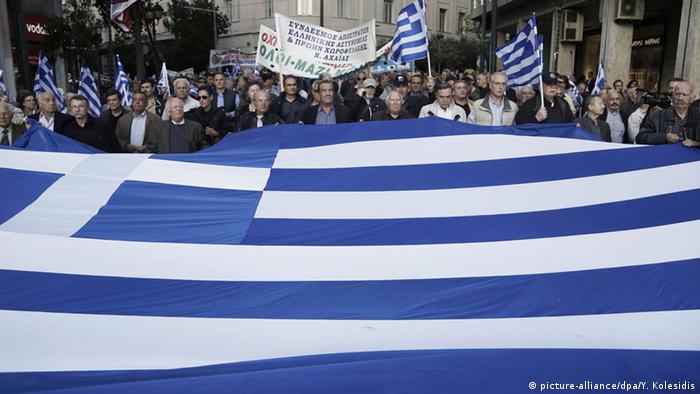 Dimitris is bitter. The retired construction worker has to live on a measly 406 euros ($463) per month. And now even that paltry sum, which is just enough to survive on in the mountains near the central city of Lamia, is about to be cut.

"I had to help on the farm when I was 5, later I became a truck driver, then a construction worker, and in my later years I was a subcontractor in the building industry," the 75-year-old Dimitris said. "I slaved away my whole life until I had my heart attack. And it was all for nothing!"

Because he retired early for health reasons, Dimitris receives a basic monthly pension payment of 253 euros. On top of that, he receives a government financed "solidarity supplement" of 153 euros - but that is now hanging in the balance. Greece's international creditors disapprove of anything that exceeds a barebones retirement payment and have ordered such funds partially or, better still, completely cut. Should Athens acquiesce, the 75-year-old Dimitris told DW, he would be forced to ask for money from his children - who themselves are barely getting by.

In April, Prime Minister Alexis Tsipras presented his proposed pension cuts to parliament. The plan calls for increasing individual social security contributions, as well as a total reduction of about 3 billion euros in disbursements to pensioners by 2019. Parliaments appears likely to pass the cuts on Sunday - in time for Monday's meeting of EU financial ministers, where Greece's cost-cutting efforts are to be evaluated. Unions responded with a two-day strike. In an attempt to calm worries, Labor, Social Insurance and Social Solidarity Minister Georgios Katrougalos has claimed that nine in 10 insured persons would be better off after the pension changes than they are now. Dimitris does not believe a word of that. "What didn't these people promise us when they were in the opposition?" he said of the prime minister's Syriza party, which was elected on an anti-austerity platform in early 2015. "They were going to raise minimum salary, overturn retirement cuts. They didn't keep any of their promises." Dimitris doesn't have any faith in the right-wing New Democracy, nor with the Socialists, who once ran the country and are now protesting against retirement cuts: They pushed through several rounds of internationally demanded austerity themselves. 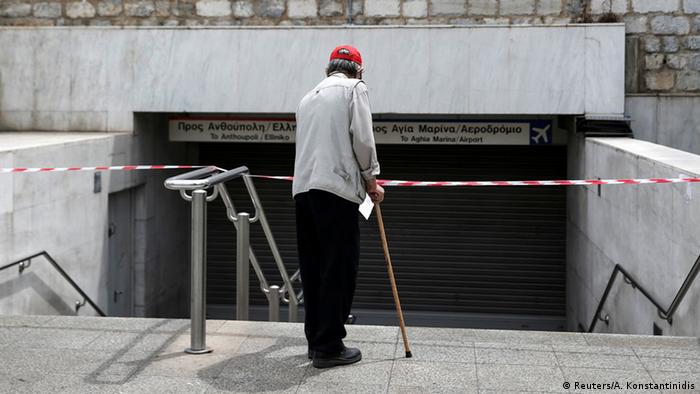 The metro stop outside parliament was closed during Friday's general strike, but the building will likely open Sunday, when lawmakers appear set to vote for increased austerity

Tsipras presented the cuts to parliament without first seeking the approval of Greece's international creditors and will likely face criticism from all sides: domestically for his government's repeated breaching of pre-election promises, and internationally from austerity-minded financiers who could say the cuts still do not go far enough. "This administration's plans are risky," Marietta Giannakou, a member of the European Parliament for New Democracy, said in a radio interview. She expects creditors to reject the cuts that Tsipras has proposed.

The economic analyst Kostas Stoupas thinks that Tsipras is intent on demonstrating courage in an almost "theatrical fashion" in order to differentiate himself from his political rivals. "Tsipras' message is: Unlike previous administrations that simply nodded in consent, we are willing to make our own decisions - and capable of it," Stoupas said.

Creditors have been able to pressure many changes into Greece's pension system in recent years: Retirement age has been raised to 67 for insured people who entered the labor market after 1993, for example, and on average pensioners receive 25 percent less than they did before the demands for austerity began, which means that half of retirees now live below the poverty line. And the pension system still depends on government subsidies - if for no other reason than the fact that after the "haircut" for private creditors in 2012, retirement funds lost half of their reserves.

Stoupas said the problem lay elsewhere. One in three Greeks still take early retirement, rendering the system not financially viable and placing an unfair burden on workers who still pay into it. The economist said the proposed cuts would not solve this fundamental problem.

Parliament will likely raise taxes on gasoline, tobacco, cable television and gambling on Sunday. There is talk of an internet tax and a special levy on bank transactions, and value-added tax is to be raised to 24 percent, too. Media are warning of a brewing "tax storm." The government is expected to take in 1.8 billion euros in additional annual income.

Dimitris, a passionate smoker, naturally dreads the planned cigarette tax. But the retiree said the rise in value-added tax would be much more painful: The prices of groceries, medicine, electricity and water would all increase.

The pensioner mostly blames previous administrations for Greece's current financial miseries. But creditors are not free from guilt. "They certainly know that reforms cannot be paid for simply by raising taxes and cutting pension payments," Dimitris said. "Still they insist upon it." What disgusts him even more, though, is that parliamentarians would be spared from future pension cuts. Social Minister Katrougalos has an astonishingly simple explanation for the privilege, one that angers many in Greece, Dimitris among them: Parliamentary pensions are paid out by the state and not financed by social security contributions.