A plan to build a billion-dollar dam to stop Indonesia's capital Jakarta from sinking into the sea has been launched. The project will take 30 years to complete, and create housing and jobs for almost a million people. 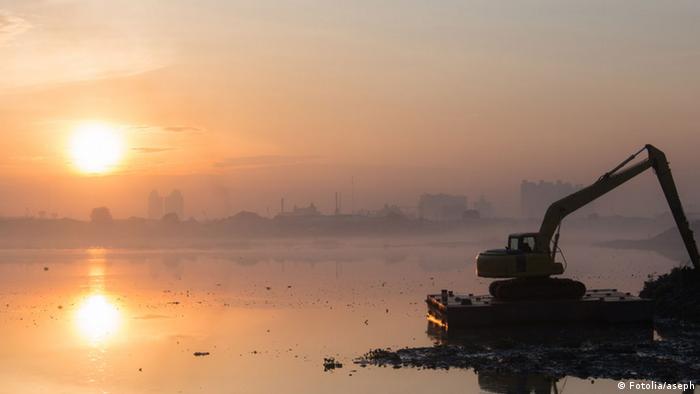 The Garuda is a powerful, mythical creature, and the emblem of the Republic of Indonesia. It originally comes from an Indian myth, in which the creature – half-man, half-eagle - steals an elixir from the gods that promises immortality. The Jakarta metropolis is now trying to ensure its own future, by building the "Great Garuda" – a 35-kilometer-long protective wall in the shape of its namesake. The wall is placed on the country's coastline a few kilometers out to sea, designed to protect Indonesia's capital from the rising sea level.

The situation for the bustling metropolis is alarming. Built on a former swamp, Jakarta is serviced by drains largely left over from the Dutch colonial area. There is virtually no functioning waste disposal system, and clean water is in constant demand. So much groundwater is pumped into the city that the soil level sinks by about seven centimeters per year – in some districts this doubles to 14 centimeters. Meanwhile, ongoing climate change is seeing sea levels rise around the world. "This combination means that in 10 to 15 years large parts of Indonesia will be underwater," says Victor Coenen, team leader with Dutch construction company Witteveen + Bos' Jakarta office, who is the main contractor on the construction of the wall. At least half a million people will be directly affected by the wall's construction. 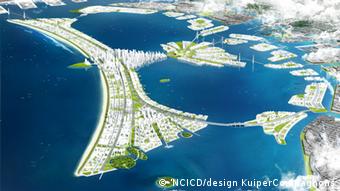 Now, in a joint initiative between the Indonesian and Dutch governments, a rescue plan has been formulated – one that will radically change the entire city's coastline. Behind the gigantic protective wall several lagoons will be built, acting as catchments for the thirteen rivers that flow into the Java Sea, while hopefully also helping to stop the annual flooding of parts of the capital during the rainy season. "All these rivers are so dirty we thought we should try tackle this problem at the same time," Coenen told DW. So that the lagoons don't also become polluted, sewage and water treatment plants, as well as garbage disposal infrastructure, will be built throughout the city. In addition, the dam is equipped with large pumping stations, helping to provide drinking water for the city's residents.

Integrated into the cityscape

During the project's implementation, both governments will rely on the expertise of several Dutch construction companies who already have experience with similar projects along the Dutch coast – though not on a scale like this. "Various components of this plan have already been implemented elsewhere in the world," says Coenen, referring, for instance, to the 30 kilometer-long Afsluitdijk, which has separated the IJssel River from the North Sea in his homeland since the 1930s. "What has not been done," the engineer continued, "is to completely integrate such a mammoth dam into a cityscape. There we are definitely entering uncharted territory."

Indonesia has passed laws easing restrictions around harvesting power from the nation’s volcanoes. Experts are hoping this will kickstart the country's potentially lucrative renewable energy market. (05.09.2014)

Human-caused climate change increased the severity of last year's heat waves in Asia, a new report found. But not all extreme weather events could be linked to global warming, as climate expert Thomas Peterson tells DW. (30.09.2014)

Furthermore, behind the dam, on several artificially- created islands, a whole new neighborhood will rise, with housing for around 300,000 people and 600,000 new jobs. For this to happen the current coastline will have to be extended seven kilometers out into the sea. "This housing is desperately needed for a rapidly expanding Jakarta," says Coenen. "At the same time, the wall will have to be integrated into the new coastline. The difficulty lies in running the wall through the city, so that's it not easily recognisable."

The "Great Garuda" wall in Jakarta is truly a mammoth project. It will cost up to 40 million US-dollars to construct, and is estimated to take around 35 years to complete. "It will be one of the three largest dams ever built in the world," says Victor Coenen. But he is confident the purely technical side at least will not be too problematic. "Many construction companies can handle a project like this. They have already proven they can do it."

More difficult is the financing, and the management of the project, which the Indonesian government is looking after. "If you just build a dam, that's no problem. Just sign a contract with a building contractor, you pay, and he delivers," said Coenen. "But if you are essentially building an entire new city, then there are so many contractors that it can be almost impossible to keep all the finances under control" – especially in a country like Indonesia, where rampant corruption remains a major problem.

"Large projects always involve large risks," said Coenen. But Jakarta is running out of time, and the engineer believes in the success of the project, even if he will not be in office when it is completed. By 2030 the dam will be standing, "but only in the middle of the century," said Coenen, "will the entire project be completed." This means it could take another 40 years for Garuda to lay his protective wings around Indonesia's capital.