Grassroots initiative to reduce poverty faces political hurdles in China | World| Breaking news and perspectives from around the globe | DW | 14.09.2010

The world put politics aside when it adopted the Millennium Goals in the year 2000. But in China, grassroots movements are developing anti-poverty strategies that contradict the country’s authoritarian system. 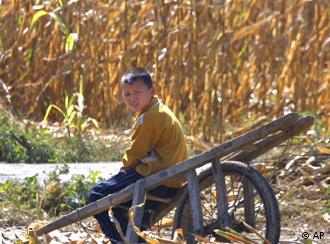 Rural poverty is still a problem in China

While regions such as Sub-Saharan Africa have seen an increase in people who live on a dollar per day, China's communist government has managed to free 600 million of its over one billion citizens from absolute poverty in the past 25 years. But a lasting improvement of living conditions can only be achieved if people themselves have a part in the decision-making process.

At the grassroots level, some Chinese have taken the initiative in this direction. They have begun to ask how citizens can continue to improve their living conditions independent of government money.

Wang Wei, from a small village in Sichuan Province, is one of them. He founded a private institute aimed at developing local communities. But the Chinese government views the underlying concept of his organization with suspicion: helping people learn to help themselves.

Wang believes that personal initiative and participation are the keys to improving living standards in his country. The means to achieve this end are small loans for co-operatives in rural communities.

"The combination of loans and later repayment supports economic activity," Wang said. "That way, you support the community's ability to develop itself."

The Chinese government keeps close tabs on Wang and his co-workers. The ideas of personal initiative and participation contradict the model of an omnipresent, patronizing state which has characterized China's political system since the Communist Party took power in 1949. 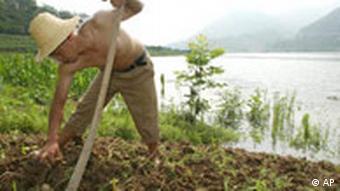 Many farmers are reluctant to take their own initiative

Wang knows the government watches his institute with suspicion. He used to work for the state in Sichuan Province with the Anti-Poverty Office, but decided to quit after his ideas fell on deaf ears.

It is not just the Chinese government that has reservations, though. The farmers themselves, the very people that Wang's institute seeks to help, are cautious. During a discussion in a neighboring mountain village with local farmers, Wang's ideas of small loans and co-operatives are met largely with silence.

Many farmers remember the era of forced collectivization during the Mao years, and are suspicious of any collective. Some personally suffered during the famine that ensued in the 1960s.

Local farmers like Ma Qian speak freely about the problems. He is angered by the state aid that came after the devastating earthquake which shook the region in 2008. 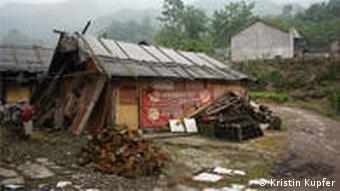 The village was largely destroyed, so the authorities built new apartment buildings - without asking the farmers for their input. The homes are now an hour-and-a-half walk away from the farmers' fields. The new apartments do have electricity and running water, but the farmers had to borrow money to afford their new accommodations and are now in debt. Their livestock is too far away. And the electricity prices are much too high.

According to Ma, identifying the problems is not an issue. Taking the initiative to solve them is the challenge. But they have to correspond to the farmers' needs.

"We have to set the exact conditions for the co-operative," says Ma. "You have to define the goal and set it in relation to the achievable income. If the goal is too high and the income too low, you won't find anyone for it."

Wang assures the farmers once again that the co-operative he is suggesting will be self-determined. Ma at least is convinced. Whether the government and the other farmers will come around remains an open question.

Note: All names in this article have been changed to protect those involved.

German diplomats have given the thumbs up to efforts by China to improve the social and economic standing of Chinese citizens. The comments came from the sixth round of bilateral talks on human rights. (29.07.2010)

China has stepped up its anti-corruption rules. All government officials must report their personal details such as income, assets and the whereabouts of their family members, state media said. (12.07.2010)

German Chancellor Angela Merkel has begun her visit to China. Her talks with Chinese leaders focused on closer cooperation. Both countries indicated their willingness to develop a comprehensive "strategic partnership". (16.07.2010)