Grappling with avian flu, Cambodians wait for compensation | Asia | An in-depth look at news from across the continent | DW | 28.03.2014

In little more than a year, 18 Cambodians are known to have died from the human form of avian influenza H5N1, the highest number of fatalities in the world. Experts have met in Phnom Penh to try to work out why. 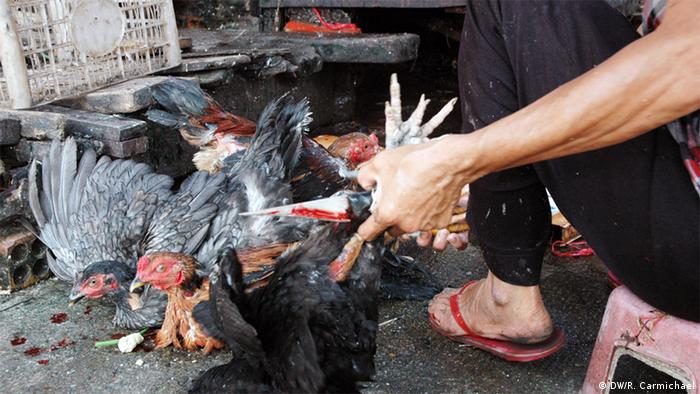 The latest victim of avian influenza was a 2-year-old girl from a village in Kampot province close to the border with Vietnam. The girl came down with flu-like symptoms in early March, several weeks after poultry began dying in her village. During that time, says the Ministry of Health, the girl had contact with dead poultry and also ate the meat. She died on March 14.

Children are particularly susceptible to the virus: of the 56 human cases confirmed since H5N1 was first detected in people here in 2005, 44 were younger than 14. In total, 37 Cambodians have died from H5N1 in that period, around half since the start of last year.

In many ways, the girl's case is typical of the array of difficulties Cambodia faces in trying to combat avian influenza. Although the government has for years warned people of the dangers of avian influenza, villagers did not inform the authorities that poultry were dying.

That lack of reporting is no surprise: the government will not compensate villagers whose birds sicken and die. In a country where half of the rural majority live below or just above the poverty line, losing the half-dozen backyard birds that villagers typically own without recompense constitutes a significant economic blow.

Lotfi Allal is the team leader at the Food and Agriculture Organization's Emergency Center for Transboundary Animal Disease (ECPAT), which works with officials in the Ministry of Agriculture to prevent avian influenza in poultry. The lack of compensation means people typically won't report outbreaks of avian influenza, he says, but there are many other issues too and few lend themselves to easy solutions.

"For instance, if you go to a village to ask famers, they will tell you they aren't eating sick ducks and chickens - they say that they burn them," he told DW. "The reality is different, but because they know it is not allowed, they [tell us] that they are not doing it."

Besides, he adds, chickens have long died here from infections such as Newcastle disease, for example, which cannot be transmitted to humans, so it is common enough for impoverished villagers to eat poultry that dies suddenly. The tough economics of rural life mean that many cannot afford to lose the protein. 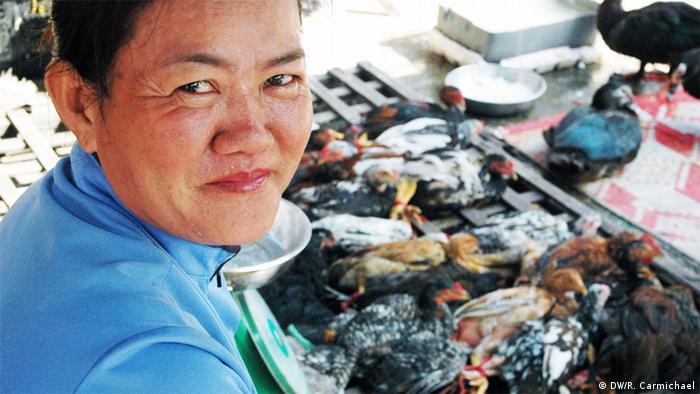 Vendor Ly Mey sells chickens at Chhbar Ampov market in Phnom Penh. After the customer picks out the chicken they want, she slaughters, plucks and guts it for them.

Last year's statistic of 14 human fatalities from 26 H5N1 infections was not just Cambodia's worst; it was the highest in the world. Oddly, neighboring Vietnam - which has the same strain of H5N1 swirling around in the south - reported just two infections last year.

Four more Cambodians have died from H5N1 this year from a total of nine infected.

This rise in numbers is why USAID, the US government's development arm, hosted a two-day meeting in Phnom Penh this week that brought together experts from the Cambodian and Vietnamese governments, as well as from agencies such as the World Health Organization and the FAO.

Dr. Dennis Carroll, who heads USAID's Pandemic Influenza and Other Emerging Threats unit, says the disparity in the number of reported cases between Vietnam and Cambodia is puzzling.

There are a number of possible reasons. For example, it could be due to the better reporting infrastructure that has been set up in Cambodia in recent years, and that more cases are being picked up. Less positively, it could be that the virus is proving more resilient. Or it could be something else entirely.

Finding the answers will in part require that those involved on the animal and human sides improve how they share information. Another step needed is to boost cross-border coordination between Vietnam and Cambodia; poultry is currently taken across the borders with few, if any, checks for H5N1.

One of many zoonoses

H5N1 is one of many zoonotic diseases - transferred between animals and humans - that health experts on the human and animal side keep a keen eye on. Others that have emerged in recent years include MERS, H7N9 and H10N8.

To date H5N1 has been shown in all but a handful of the world's 650 known cases to transmit only from animals to humans, not between humans. But the fear is that the virus will mutate and become a strain that does allow easy human-to-human transmission.

Should that happen, the consequences for global health could be profound. The Spanish Flu of 1918, which stemmed from an avian influenza and killed tens of millions of people worldwide, is the pandemic that experts most commonly cite. Countering the risk of another such pandemic is a key reason why governments and donor agencies are working on the issue in countries like Cambodia.

Dr. Philippe Buchy, who heads the virology unit at the Institut Pasteur du Cambodge, which tests human and animal samples for H5N1, says the events of the past decade since H5N1 emerged here remind him of the fable about the boy who cried wolf. To date no pandemic has emerged, and it might well never do so; as a result, interest and funding have waned in recent years.

"But I can tell you that no flu expert thinks it's an over-rated risk," he tells DW. 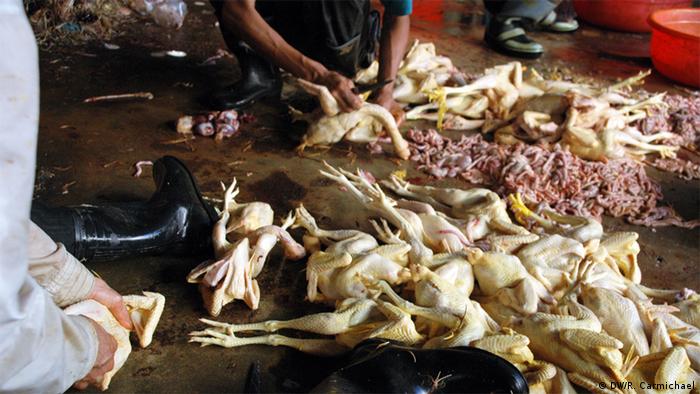 Buchy says the H5N1 virus has indeed evolved over the past decade, "like every influenza virus naturally evolves, step by step, slowly." It might continue doing that for another ten years, or it could change quickly.

"There is absolutely no way to predict that," he says, adding that this change could come about in two ways.

"The first way is it could just mutate, accumulate mutations, that will make this virus more easily transmissible from human-to-human. Which is not the case now."

It could also come about if H5N1 were to recombine with another virus in a human host - say the seasonal flu virus - then re-emerge as a new subtype of the H-type virus that is both virulent and easy to transmit. It is for that reason Institut Pasteur's staff examines every sample of suspected H5N1 infection to check for mutations.

After a decade of failing to win the fight against H5N1, the virus is now endemic in Cambodia's poultry. That is unlikely to change soon, and means the solution lies in monitoring outbreaks in poultry (which is not working well) and keeping tabs on human cases (surveillance of which has improved significantly in recent years).

But in a country of 15 million chickens and five million ducks, most of which are kept by villagers, and with no incentive to report outbreaks, the challenges are immense. Those involved say new solutions are needed, not only to combat H5N1 but also to tackle the new zoonotic diseases that have emerged in China and that will likely reach Cambodia.

Some experts believe the government will eventually have to agree to a compensation program for poultry losses among villagers if Cambodia is to get a handle on H5N1. Until then, they say, villagers will keep eating birds that get sick, traders will offload sick or dead poultry into markets, and more people will get infected.

The conflict over raising the minimum wage in Cambodia's textile industry reflects a growing power struggle between the government and the opposition, which might throw the nation into a political deadlock. (19.03.2014)

Cambodia has been ruled for nearly 25 years by Hun Sen. His biggest rival is Sam Rainsy, who, in his struggle for power, has made use of widespread racism toward the Vietnamese. (05.03.2014)