Global Media Forum: How art can make a difference | Germany | News and in-depth reporting from Berlin and beyond | DW | 15.06.2016

Global Media Forum: How art can make a difference

At the international media conference, artists talked about changing societies through rap, graffitit or satire. Participants from Egypt and Syria have moved along revolutions, or provided levity in war-torn countries. 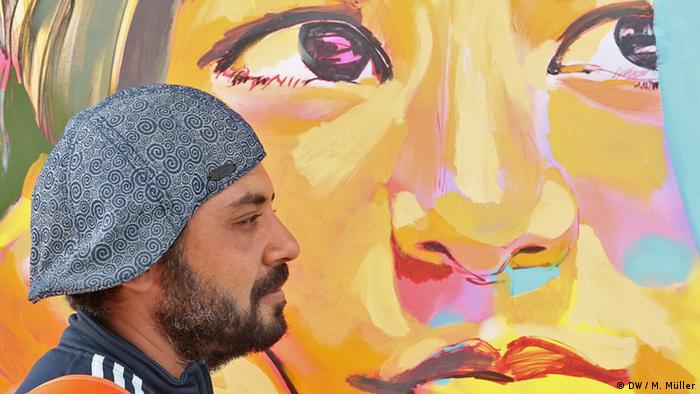 Millions of people have died in wars and government crackdowns in Syria, Iraq and Egypt. In Germany, anti-immigrant sentiments against refugees escaping these countries seems to be growing. While these are difficult times, there are beacons of hope - and one of them is art.

It could be classical music played for street children plagued by war, a satirist TV program with no respect for incompetent government officials or rap songs that condemn racism - any of these artistic expressions give people hope.

"All of us hope to have freedom in our countries," Egyptian artist and muralist Ammar Abo Bakr said at a panel discussion about culture in times of crisis at DW's Global Media Forum (GMF) in Bonn, Germany. "And art is important for that." 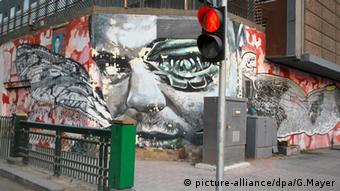 Abo Bakr started drawing and spraying murals in public places across Cairo during the Arab Spring in 2011. He "reported on the revolution by using the city's walls," Kate Müser, DW culture editor and the panel's moderator, said.

Informing citizens about what's going on, despite regime attempts to turn them into gullible sheep - that's one thing that art can achieve in difficult environments. Satirist Ahmed al-Basheer, who lost his father and other loved ones in the Iraq war, uses his satiric TV show to reveal to his audience the going-ons of his country's government. Getting the Iraqi audience onboard was no easy feat at first.

The turning point came when his viewers realized that they could trust him - and that the show was actually affecting change. Some politicians changed their behavior because they were afraid they'd be made fun of in the program, al-Basheer reported. And if you make fun of an Iraqi politician, "it hurts them more than hitting them in the face," according to the comedian.

Pianist Aeham Ahmed is actually trying to take his audience's mind off of the horror around them - the Palestinian refugee played his piano in the streets of Syria for years. He mixed classical music by Rachmaninoff and other famous composers with Arab folk songs in the midst of a horrible war.

"It's good to do something for the children there - they were laughing," Ahmed said to applause from the ranks of the former parliament plenary chamber where the discussion was taking place. "I don't need to make a revolution, I just play my piano and see children smile."

In the end, the terror and the bombs became too much and Ahmed fled to Germany. He has taken his art along with him and is now playing the piano for Germans.

"It wasn't easy. When I went out [in Syria], I told my wife I might not come back, but that I'd do good things," Ahmed remembered.

He told her that he didn't fight and just wanted to play his music. While there are no bombs falling from the skies in his new home, he is now struggling with German bureaucracy, an "art form" in itself. So far, Ahmed hasn't managed to bring his wife to Germany, something he admits he is ashamed of.

German rappers Samy Deluxe and Fetsum use their music to fight growing racism against refugees like Ahmed who come to Germany to escape the horrors of war.

"Music has the perfect power to build bridges," Fetsum said. 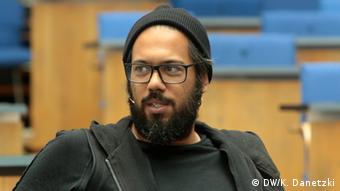 Deluxe: Germany is a paradise for freedom of expression

Deluxe, whose father is from Sudan, said he was mercilessly teased and discriminated against as a child and a teenager because was different from his all-white peers.

Today, he helps out at-risk youth by going into schools and offering hip hop workshops. With his lyrics and with his appearances in talk shows, he's also trying to stem the rise of anti-immigrant feelings, which are perpetuated by parties like the Alternative for Germany (AfD).

"People asked whether I was shocked about [the rise of] the AfD," Deluxe said. "But this is nothing new. People act like this whenever they're scared," he believes.

While the discussion showed how different art forms can influence society in different ways, audience members at the GMF panel found there was one perspective missing. Why were there no female artists on the panel?

"In 2016, we shouldn't have this discussion without women," journalist Wanjiku Mwaura said. She moved to Bonn from Kenya in February and said that the contribution of women to history has gone unacknowledged too often already.

If organizers hear the complaints, all-male panels might be a thing of a past at the next Global Media Forum - just another way that cultural exchange could change society.

DW's annual media conference has come to a close after three days of lively debate and high-profile speakers. International crises and the interplay between media and technology dominated the forum. (15.06.2016)

DW Global Media Forum on how the press failed refugees

Despite the gravity of the story, journalists have failed to present an objective picture of the refugee crisis. Resolving this problem was in focus at the international media conference. (15.06.2016)

Following the scandal over an antisemitic artwork at the documenta art show in Kassel, the curatorial team has now been joined by the artist collective Taring Padi in apologizing.