Plankton has a plastic lunch

For the first time ever, scientists recorded a video of plankton feeding on tiny plastic pieces. And once its in the food chain, it's bad news all round. 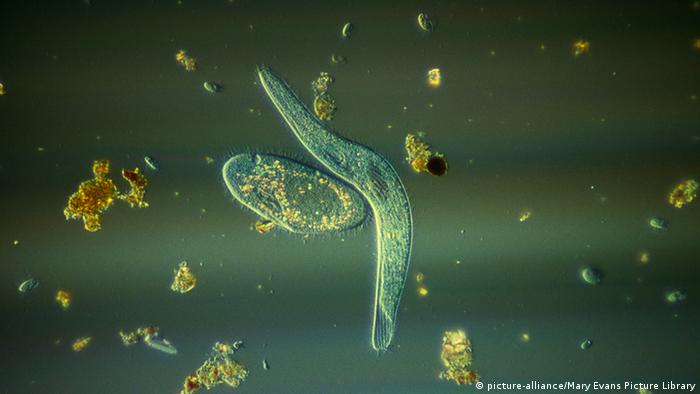 What you see here could not be described as the ideal nutrition for a marine species. For the first time ever, scientists at the #link:http://www.pml.ac.uk/:Plymouth Marine Laboratory# in the UK were able to film plankton munching on tiny pieces of plastic.

The video was made with the help of a microscope and ample recording time. To observe the process, the team surrounded copepods - a type of zooplankton - with tiny fluorescent polystyrene beads between 7 and 30 micrometres in diameter.

They were astonished by what they saw. Zooplankton, which normally feeds on algae, swallowed bits of plastic as well. Usually, the tiny creatures are able to discriminate between different species of algae, using chemical and touch receptors. However, if the plastic parts are of a similar size, they can easily be mistaken for food.

Each year millions of tonnes of plastic# end up in the oceans. Among this debris are tiny particles, fragments of objects like buoys, floats or polyester fabrics or additives found in cosmetics. They can be toxic and easily find their way into the food chain, in which #link:http://www.indiana.edu/~clp/documents/Zooplankton%20Factsheet.pdf:zooplankton (pdf)# plays an important role. Although they are microscopic, they are a valuable food source for planktivorous fish and other organisms.

In some cases the scientists found the creatures excrete the plastic within hours, but in others, it remained in their intestinal tracts for several days. When their stomachs are full, the zooplankton can’t feed properly, which threatens their survival and reproductive success.