Mexico City's creaking water infrastructure is a public health hazard and environmental disaster. Flooding and water shortages are commonplace. But grassroots movements are harnessing rainwater to ease the crisis. 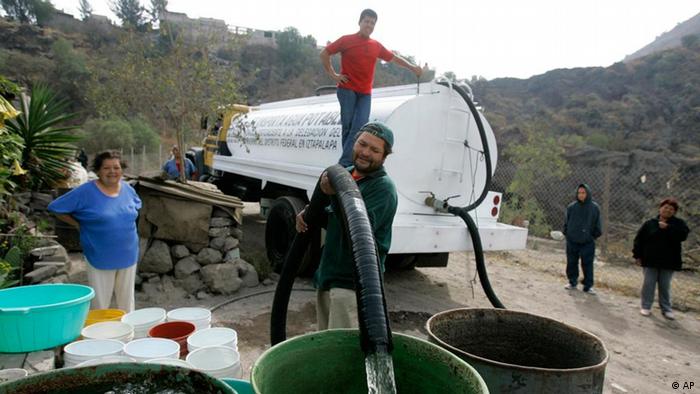 Rain pours from leaden skies and water sluices out of sewers, deluging streets and cascading down steps into the subway. In some neighborhoods, homes and businesses flood. People dash for cover, huddle under umbrellas and leap over huge puddles.

During the tail-end of rainy season, Mexico City has become an obstacle course.
Regular flooding is one symptom of the city's ailing water infrastructure, which groans under the weight of years of neglect, mismanagement and shortsighted profiteering, as well as a rapidly growing population. Ironically, the abundance of water belies another consequence of these ills - an increasingly severe water shortage.

Nearly 30 percent of houses - mainly in poor neighborhoods - lack adequate access to clean water. Often what flows from faucets is little more than liquefied mud. Some communities go completely without plumbing, and have little choice but to buy water from roaming trucks.

In the city's Iztapalapa borough, some 2 million people rely on a thousand or so trucks for a small supply of water. But it falls far short of what they need to bathe, wash clothes and dishes, and cook. And it is not safe to drink - so many Mexicans rely on dealers selling purified water at a significant markup.

It's a public health and environmental crisis that David Barkin, an economics professor at Mexico City's Metropolitan Autonomous University, says could spiral out of control as climate change exacerbates competition for water.

"One of the major impacts of climate change in Mexico is going to be a dramatic change in the availability of water on a regional basis," he told DW. "That will lead to conflict, very, very serious conflict." 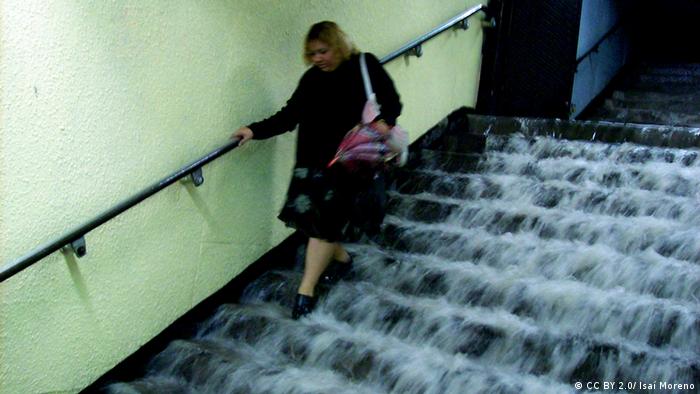 The city's water woes go way back. In 1521, when the Spanish conquered Tenochtitlán - the Aztec capital upon which modern-day Mexico City was built - they were "amazed" by the city's construction and riches, says Mikael Wolfe, an environmental historian at Stanford University.

Lush Tenochtitlán was located on an island in Lake Texcoco and supported around 200,000 people. It had a relatively sustainable water management system that helped protect against flooding, and provided potable water to the city's population.

Although they were enchanted by the place, Wolfe says the Spaniards "disliked the lacustrine [lake] environment and within decades, embarked on a gigantic engineering project" to drain it, thereby allowing for more intensive agriculture and urban expansion.

Colonial administrations also exploited local lakes and aquifers - a practice that continues to this day. But draining underground aquifers has led to a further problem - Mexico City has sunk around 10 meters (33 feet) over the past 60 years, according to recent government estimates.

As the city and its suburbs' population exploded to today's 22 million, and agriculture and industry intensified, water demand outstripped what the lakes could provide. By the mid-20th century, Mexico City began transporting water over hundreds of kilometers from the Cutzamala and Lerma rivers in neighboring states.

Today, around 30 percent of the city's water continues to be piped in this way. Given that Mexico City is nestled in a valley high up in the mountains, it's an amazing feat of engineering - but unsustainable. It is also causing distant lakes and rivers to dry up, depriving mainly indigenous populations of their resources and resulting in often violent protests.

And that need not be. Because unlike other water crises, Mexico City's is not merely a result of drought or unfortunate geography.

"This is not a crisis of water, it's a crisis of governance and paradigms," Barkin told DW. "Mexico City valley is quite capable - if the infrastructure were built - of providing its own water supply of a much higher quality and ensuring universal service." 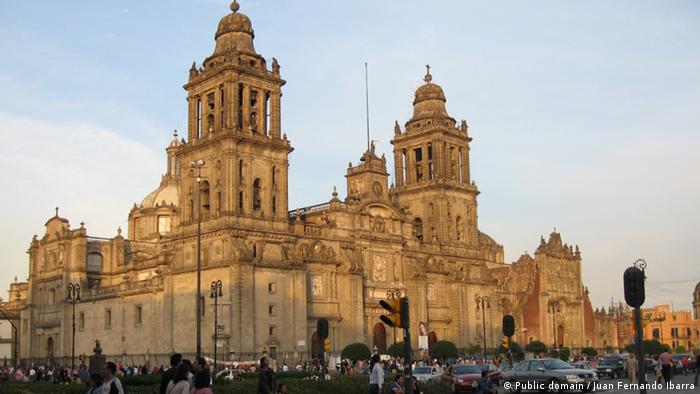 With up to 40 percent of the city's water lost to countless small leaks, experts say sustainable management delegated to local communities with proper water storage facilities and modern infrastructure is key to mitigating the problem.

Rather than just waiting for something to happen, citizens and social entrepreneurs are getting their feet wet - stepping in where they see a lack of government action. For many, one clear solution is to take advantage of Mexico City's rainy season by harvesting rainwater.

Casa de Los Amigos, a social justice-oriented guest house near the city's historic center, installed a catchment system in 2014 to collect and filter rainfall, and complement its solar water heater.

"Our new rainwater catchment system is an example of something that could be so easy for so many families in Mexico City," says director Hayley Hathaway. The casa, like most businesses and hotels in the city, is adorned with multiple signs reminding guests not to waste water. "When it rains, it's just disastrous in the city, with flooding everywhere. So if everyone had their own rainwater system, it would solve a pretty big chunk of that problem."

Established in 2009, the organization buys all the materials for the 305 euros (350 dollars) harvesters from local hardware stores, and trains homeowners to build and maintain the systems themselves. So far, they've installed nearly 2,000 across the city. 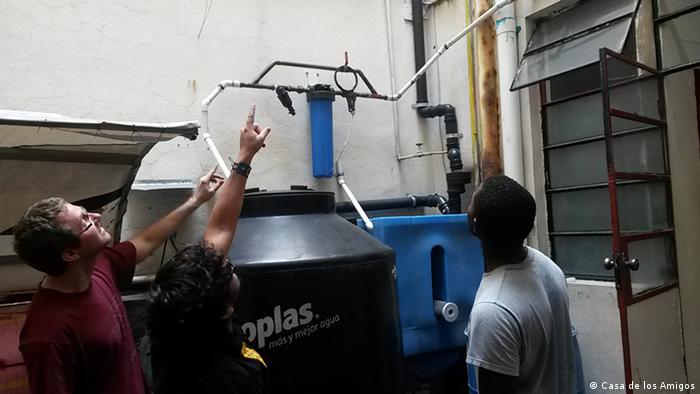 Casa de los Amigos is one of many businesses and homes that have installed a rainwater harvester. Pictured from left to right are William Tetler, a volunteer from England, Daniel Otero, volunteer coordinator from Mexico and Marcus Levy, a volunteer from the US

But Ramón Aguirre Díaz, the director of the Mexico City Water Department, has repeatedly said the potential of rainwater harvesting is overblown. In an interview last year with the Public Broadcasting Service (PBS) in the USA, Díaz said a comprehensive system would supply around 10 percent of the city's water needs - "and that is being generous."

"To build infrastructure to capture the water, store the water, purify the water, it’s just not financially viable," said Díaz, who added his department has a more comprehensive plan in the works, including fixing the system's leaks, recycling water, replenishing aquifers and campaigning to lower water consumption.

Still, Wolfe says Mexico has always found it difficult to "implement more sustainable water policies even under the best of circumstances" - meaning when the circumstances are free of corruption and conflicts of interest.

"The government agencies that are charged with water management, such as the Ministry of Hydraulic Resources [now the National Water Commission], have and continue to release long-term plans to conserve and decontaminate water supplies. But they are rarely implemented," he said.

Until these do get implemented, Barkin and Wolfe - like many - are placing their hopes in local activism and grassroots movements like Isla Urbana.

"I think there are possibilities for change on a local level - but not to national water policy," says Barkin. "These local efforts will have varying degrees of success in mobilizing local government resources for environmentally sounder water policies."

The Herrenknecht company specializes in tunnel-boring equipment. Three of its enormous drilling machines tare in Mexico to solve an equally massive problem: the inadequate drainage and wastewater system of Mexico City. (28.12.2010)

Warm water from the roofs of Mexico

When Nazis killed 100 Serbs per dead German in Yugoslavia