Digital games in Kenya now seem more of a sure bet than real-life sporting activities in the East African nation. Esports have also become a huge money-spinner for young Kenyans. 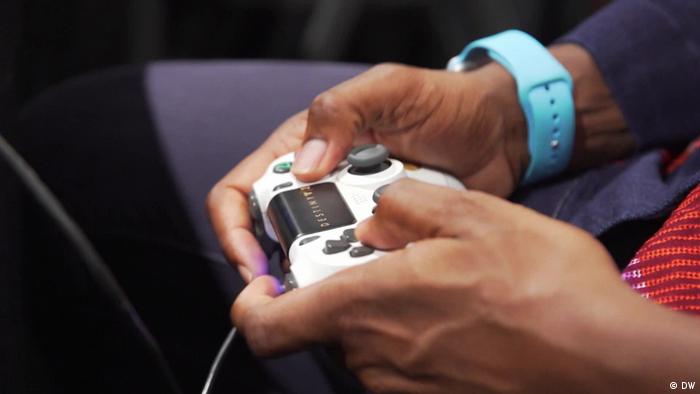 The future of professional sports in Kenya — from where some of the world's top athletic performers originate — is still rather uncertain in the face of the COVID pandemic.

Athletes preparing for the Tokyo Olympics, or anyone wanting to get out and exercise, have had to make do with alternative spaces as coronavirus measures put many gyms and stadiums off-limits.

But, as far as young people are concerned, the virtual world of esports is on the up. The competition is as tough as any athletic tournament, but video gamers are taking the challenge and getting paid to play.

Esports is taking place in the cyber realm of Kenya's capital, Nairobi, and other places, where young gamers are glued to computers to battle it out with their opponents.

Fredrick Renja Ochami has me locked in battle at his apartment in the city and I'm being demolished. It's hand-to-hand combat in a Tekken showdown in Nairobi.

The Japanese game is one of a few that Ochami plays professionally. He's also a virtual football boss at world-tournament level in the real-time FIFA video game series.

"My top three are FIFA, Tekken and League of Legends," he said. "Tekken is one of the most balanced fighting games I know. Unlike Mortal Kombat, every fighter feels like he has a chance to win."

And with esports, the payoff is money. Ochami's virtual football team earns him a share of his rent and some cash for groceries. He also makes some money as a fiction writer.

Computer games in the age of COVID-19

"There's no one who is overpowered because everyone has an equal chance. It depends on your skill, not on the character that you choose," the Tekken professional said.

Kenya's esports professionals are aged between 15 and 35. The men and women on the gaming scene who spoke to DW said they train 12 to 14 hours a day, three to four times a week.

"For now, I spend like four hours on weekdays and eight hours each weekend," said Ochami.

"I would say esports, especially games like Call of Duty and FIFA, those are the games you should play if you want to go pro, because they have big prize pools," Ochami said.

Esports in Abidijan: A game changer

Sylvia Gathoni was the first Kenyan Tekken professional to sign for up to an international gaming team. She said people sometimes cast a suspicious eye when they hear how she earns a living.

Gathoni — who goes by the name Queen Arrow in the gaming world — said she believes that that's simply because she's a woman.

"Some people feel like the opportunities I have gotten are due to my gender and not my hard work and passion and talent. But, as they say, the best revenge is success. You just focus on your goals and you continue pushing," she said.

Esports leagues come with stipends and corporate sponsorships. Gamers in Kenya said that being part of an eight-member virtual FIFA team on a winning steak can mean €500 in the bank every month.

Esports and sexism: Enough is enough

Esports keeps the lights on, as COVID-19 shuts down global sports

FIFA eWorld Cup: Is it a men-only domain?

The FIFA eWorld Cup was recently held at London's O2 Arena, with the world's best players battling it out for a $250,000 prize. But does the tournament remain a male-dominated event?