An industry body has called the demonstrations "the largest taxi protest" in Germany's modern history. Taxi drivers are rallying against plans to open Germany to ride-hailing services like Uber. 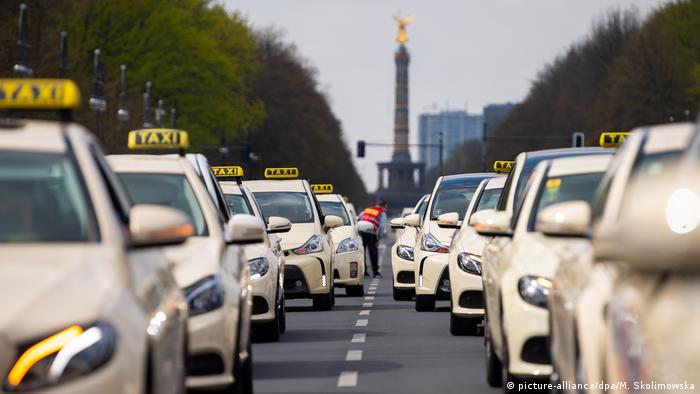 Taxi drivers across Germany on Wednesday protested against government plans to relax regulations that would allow ride-hailing services such as Uber to operate in the country.

The German Taxi and Rental Car Association (BZP) called it "the largest taxi protest in the history of the federal republic."

Currently, the taxi industry has managed to stave off greater access to the German market for such services. Uber has permission to operate in Berlin, Munich and Dusseldorf, albeit under heavy restrictions, including requiring special licenses for drivers.

The government has proposed relaxing those restrictions. However, the taxi industry has urged Berlin to shelve the reforms, saying it would decimate the livelihoods of taxi drivers.

"We need a good supply of taxis that operate in fair, competitive conditions and with good social standards," Scheuer said at a taxi protest in Berlin, according to his spokesperson. "No one wants unfair, unregulated situations like in other countries."

Uber and other ride-hailing services have been criticized for undermining the heavily-regulated industry, failing to provide safety nets for drivers and, at times, compromising the security of clients.

But last year, Scheuer said Uber and other ride-hailing services provided new opportunities: "We can create new possibilities, especially in rural areas and for older people, with car services and pooling systems."

The minister also acknowledged via Twitter the upcoming protests on Tuesday, thanking a taxi driver for taking him to parliament and including a video of a two-minute conversation between the two in which Scheuer claimed he could meet "six and a half" of the seven demands issued to him by the taxi drivers' association.